The catches this week have increased rapidly.

On Friday the average size of the smolts appeared to be smaller with more in the 115-140mm range. There was also a noticeable peaty tinge to the water suggesting a greater input of upper catchment water.
The catch has been dominated by salmon smolts with a few more sea trout smolts in the last two days.

Today we noticed a higher proportion of bird damaged fish. The river is still relatively low so the herons will be able to catch the smolts easily. The fish in the photo below looks as if it has escaped from a herons beak. The parallel beak marks can be seen on the right of the photo, with extensive damage where the smolts twisted free. 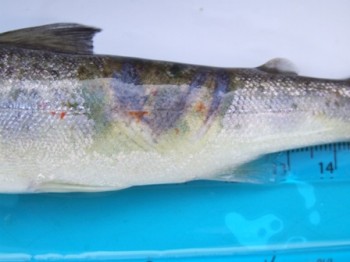 This smolt was grabbed behind the head and the gill cover was damaged, again the parallel beak marks can be seen. 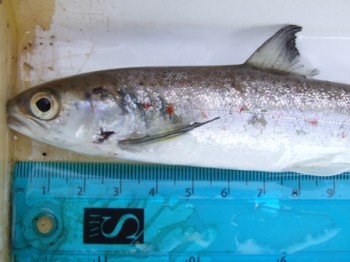 There was a great hatch of flies today and many smolts and parr were rising. This Late March Brown landed on my hand. Note that Late March Brown is the common name of this species which should not be mistaken for the true March Brown, we don’t think they are present in Ayrshire. 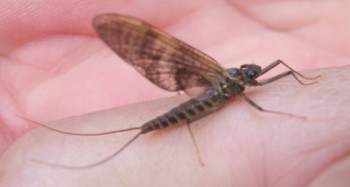 If anyone would like to assist with the trap please get in touch with the Trust.