Interesting catch in the smolt trap

As predicted it was a busy weekend with the smolt trap. Over 500 smolts were found in the trap on Saturday morning, 230 on Sunday and 360 this morning. The vast majority are salmon smolts with a relatively low proportion of sea trout.  The river level  is getting lower but that does not seem to be stopping the smolt run. Every pool in the lower river appears to be full of smolts.  A good rise in river levels would help them on their way to the sea, but that does not seem imminent given the forecast this week.

During the sorting of the fish on Sunday an adult river lamprey was found (29cm long). This is the first time an adult has been seen by ART staff, although juveniles were recorded in several of our rivers when the Trust participated in a national survey in 2003/4. 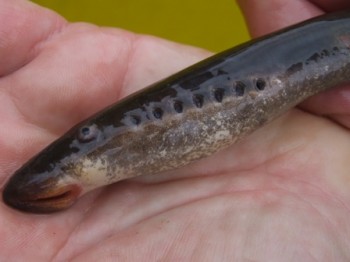 River lampreys spawn in rivers where the juveniles live in silt beds for a period before they transform into adults and migrate to sea. As adults they are parasitic, feeding on fish such as herring. They have a highly specialised “sucker like”  mouth with which they attach themselves to host fish. 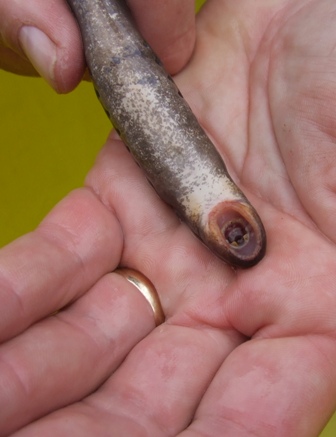 They return to the river to spawn, running back up the river in the autumn or in the spring. Spawning occurs in the spring once the water temperature is above 10 degrees C. In the last week or two the river temperature has been above the trigger level so we can only assume that it had spawned nearby. All river lampreys die after spawning.

This was a very interesting find, a great addition to the biodiversity of the River Ayr!