It was good to get out electrofishing today, our first proper day surveying, although the Salmon in the Classroom project had involved a few mini surveys.

Gillian and myself, with the assistance of Galston Angling Club members surveyed a few tributary sites in the upper Irvine Valley before the rain put us off  (looks like the announcement of a hosepipe ban in Dumfries & Galloway has worked a treat!)

The first site was in Galston in the Burn Anne, or Burnawn as it’s known locally. The findings here were very good with an abundance of salmon fry and parr, with even better densities than the excellent results recorded at the same site last year. In 2008 a fish pass was installed in the lower reaches of the burn and a massive number of salmon were seen spawning in the burn for the first time. This year the fry density was even higher, despite no one reporting seeing any salmon spawning last winter. The salmon parr density was 6x higher than last year, presumably a result of the high fry densities last year.

We also had some nice trout parr, although the largest was only 168mm, whereas we had 10 bigger ones last year. The condition of all the fish was superb, as can be seen in this photo of a 168mm trout.

Another site, the Huggin Craig Burn at Newmilns gave us our highest ever density of trout parr (156/100m2).  54 parr came from a site that was only 19m long and under 2m wide. Nearly all the parr came from a single deep pool with overhanging bushes. The remarkable concentration of parr in that pool was probably a result of the extended period of low water, with the larger fish congregating in the deeper holes. This highlights the importance of habitat variety. If that burn had been dredged or straightening in the past, would it have held any parr? The condition factor, and growth rate of the trout parr was relatively poor, probably due to the over crowding and competition. At least two herons flew away from the vicinity of the site as we approached so they were obviously aware of the potential food source.

The trout parr were very pretty, although this photo doesn’t do this one justice (we were under a tree and I had to use the flash).

The deep pool where we found all the parr. 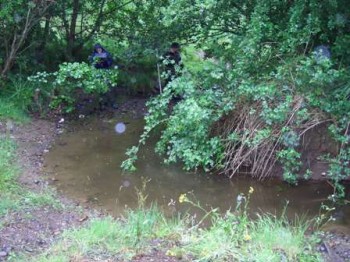 Keep tuning in for more titbits of info on the work of the Trust.