Thanks to funding from SEPA and the Doon Fishery Board we have been able to make a start on controlling invasive weeds on the Doon. Himalayan balsam is was well established on the Chapleton Burn (the one that flows in at Cassillis) but with the enthusiastic help of BTCV volunteers, ART staff, spouses etc we have removed most of it. 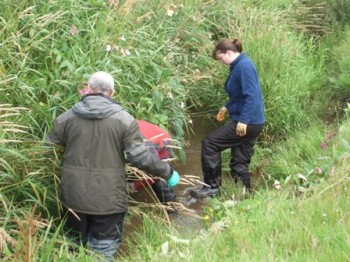 Being an annual plant it is very shallow rooted and can be pulled quite easily, the main hazards being nettles/insects/soft muddy bottoms and bit of grass in the eye. However with a bit of determination this sort of scene: 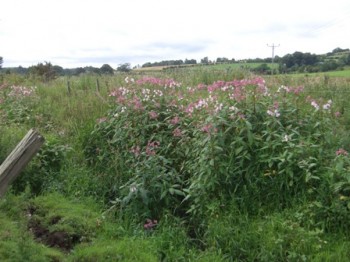 can soon be turned into this: 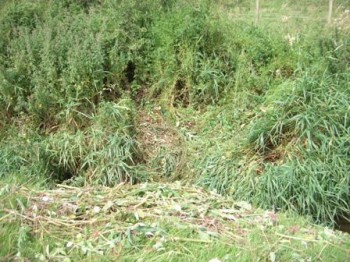 We hope we have caught the balsam in time on the Doon as so far there is very little on the main river downstream. Having said that we were electrofishing at Monkwood Mill last week and we found a single plant gr 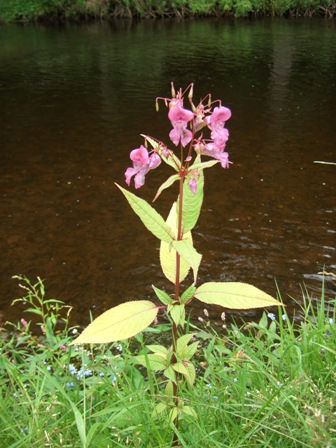 This plant was removed but there will be others. We would urge all lower Doon to be vigilant and to remove any flowering balsam plants before the pods start to explode.

Himalayan balsam is regarded as a pretty and harmless plant by many but the rate at which it spreads and its dominance once established is amazing. If we don’t get on top of the balsam now the Doon will soon be the same as the lower Stinchar: wall to wall balsam. Take a drive round the roads upstream of Ballantrae and you will soon see the extent of the problem. There the balsam is forming hedges round fields, becoming established along roadsides, taking over any rough ground,gardens, etc.

Thanks for your help: your river needs you.