During an investigation to find the source of a pollution incident last November Trust staff found that the Blueboots Lane, a tributary of the Burnock Water, which flows into the Lugar Water at Ochiltree, had been diverted down an artificial, straight channel. The diversion had taken place several years ago but the new channel was subject to considerable ongoing erosion and access for migratory fish was all but impossible.

This issue was discussed with ATH Resources, operators of the nearby Skares opencast coal mine, and acting purely on thier own iniatitive they sealed the diversion and allowed the burn to flow down its natural course. 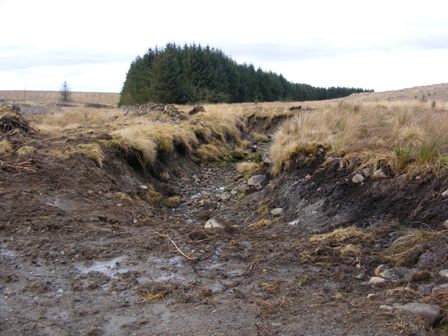 The old natural channel was intact and looking at it now you would never know it had been dry for many years. 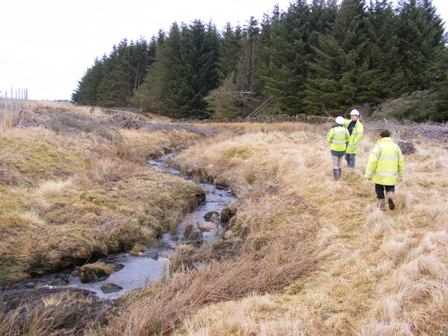 The restoration of the flow down the natural channel will re-establish habitat connectivity between the Blueboots Lane and the Burnock Water opening up a significant area of good spawning and juvenile habitat. The Trust has never found salmon this far up the Burnock Water, although the local farmer reports that he used to see salmon in the area. There is however a good population of brown trout. 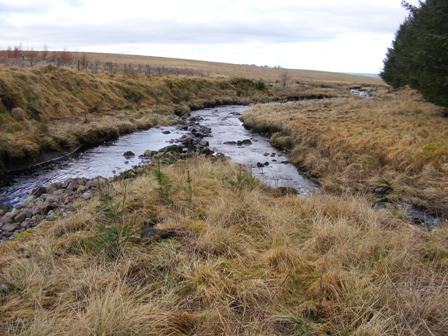 We are often critical of the impacts of the opencast mining industry but on this occasion Ayrshire Rivers Trust are pleased to be able to commend ATH Resources for their direct action in restoring the flow back down its original course.

I am always interested in the origins of placenames and Blueboots Lane is an intriguing one. Does anyone have an explanation for its origin? The term “Lane ” is commonly used in this part of the world for a burn, although I understood that it was reserved for watercourses between two lochs. There are no lochs in the Burnock catchment so even the use of the term Lane is unusual.

All comments welcome, except spammers!