Hillhead Primary, Kilmarnock, recently completed the “Salmon in the Classroom” project delivered by Ayrshire Rivers Trust. The P4 class pupils incubated and hatched salmon eggs sourced from the local river in an aquarium in the classroom before releasing the alevins into an artificial redd (nest) created in the Kilmarnock Water downstream of Dean Castle Park. The highlight of the project was when a salmon fry was found during an electrofishing field trip back to the release site on the last day of the project. As well as the salmon fry, a range of other fish species were found during the field trip including brown trout, stone loach, minnows and a big eel.

Trust biologists Brian Shaw and Gillian Murray really enjoyed working with Hillhead School, “the pupils were very enthusiastic and quick learners, and were able to remember the names of each stage of the salmon lifecycle” reported Gillian.  During the field trip to release the alevins the pupils also carried out some bug hunting and were able to identify mayflies, stoneflies and caddis flies, all signs of a healthy river. The pupils really enjoyed the project and in a letter to the Trust said “Our absolute favourite part was coming to the Kilmarnock Water and taking part in electrofishing, this activity was our favourite because; we found five types of fish, we didn’t harm the fish and we saw things we would never see. Without the Rivers Trust coming to our school we would never have hatched salmon eggs, we are very proud of ourselves.” 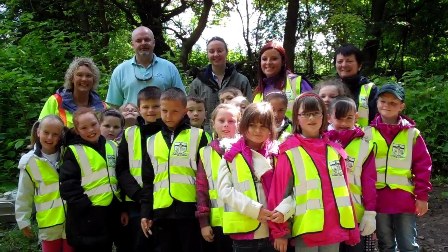 Brian Shaw said “usually it is impossible to know whether salmon fry found during electrofishing trips were from those reared in the classroom or naturally spawned. However in this case we can be certain it was one of the salmon hatched by the class as salmon cannot currently reach this part of the river due to the man-made modifications at Black Rocks waterfall”. This will soon be resolved as Ayrshire Rivers Trust, with funding provided by SEPA, Barr Environmental and East Ayrshire council are building a fish pass at Black Rocks Waterfall this summer to allow migratory fish such as salmon upstream to spawn.

As well as Hillhead Primary school, five other East Ayrshire schools participated in the project in 2011, Barshare, Patna, Hurlford, Newmilns and Galston. We are grateful to SNH, East Ayrshire Council and ATH Resources for funding the project at these schools.