Brian and I were out spraying Giant Hogweed on the Galston Club water on thursday evening. We didn’t find many hogweed plants at all and perhaps only 2 or 3 that would have flowered this season which indicates that last years control was highly effective and all credit for this to Garry Anderson for being so diligent.
There is a developing problem with Himalayan Balsam and all anglers in this area should familiarise themselves with this plant and follow the “take 5, pull 5” method in a bid to get this under control before the problem explodes throughout the upper river. I sprayed large swathes on both banks at the upper limit of it’s range (just up stream of the collapsed bank on the bend) and this will make a huge dent in the problem this year but it won’t solve it and there will be a bit of manual pulling required. The Cessnock is the main source of HB on the upper river and this also needs tackled asap. The image below shows a stand of Himalayan Balsam that could easily be controlled by spraying with very little damage to native species. 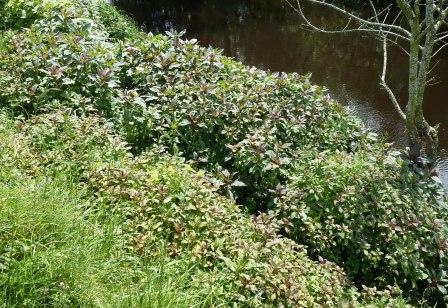 It would be good to know that the clubs in the upper river have trained individuals ready and willing to take control of their own stretch as it isn’t really our role to spray these areas and despite only having low level infestations the Trust’s remit is one of support rather than taking responsibility for this action. We still have funding available for training in key areas so anyone interested should let us know.