I had a call the other day from an angler who had just caught a fresh run salmon from the Ayr which he described as being covered in about 60 lice. A lice burden of that level is unusual so I nipped up to see the fish which had by that time been gutted. I managed to find a few lice on the fish and was interested to see that there was a mixture of freshwater lice (Argulus)( larger paler ones in the photo below) and sealice, Lepeophtheirus salmonis. 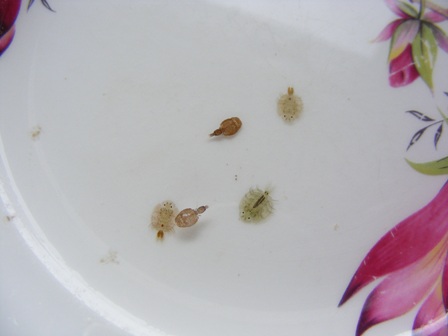 The sealice were males which apparently can survive for up to a week in the river. The presence of the two types of lice on the same fish is unusual, there must be a high density of Argulus in the Ayr this year for this fish to gather so many in just a few days.

In 2006 we sent a sample of freshwater lice from a dying brown trout in the lower River Ayr to Marine Scotland for identification. The report found  they were Argulus coregoni, and  stated “that heavily infested fish can become listless, emaciated and prone to secondary infection”. An adult salmon could cope with a moderate number of lice but the consequences for smaller fish may be more serious. I have seen heavy infestation on stocked brown trout in the river. These fish will not be as resiliant as the native fish so may attract a higher burden.

It is not often I get to see a dead salmon these days so it was interesting to try and identify the sex from the head of the fish. What do you think? 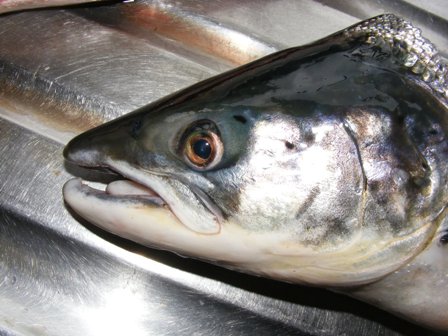 The angler thought it was a cock but an examination of the carrier bag containing the entrails showed it to be a hen. 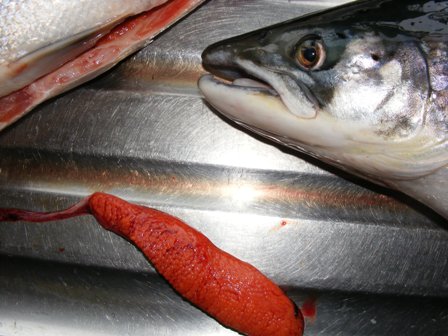 Many experienced anglers would have said it was a male;  just goes to show you that it is difficult to tell the sex of a fresh run spring/summer fish, especially when it is still alive on the riverbank.