After a fair bit of negotiation with Glasgow Prestwick Airport, ART finally gained access to spray the few giant hogweed plants that had developed within the perimiter fence. The Ladykirk Burn and the Sandyford Burn meet on the east side of the airfield before being culverted under the runway. A small stand of GHW was noticed flowering and it became an urgent task to bring this under control as the rest of the catchment was sprayed as part of the INTERREG IV project. 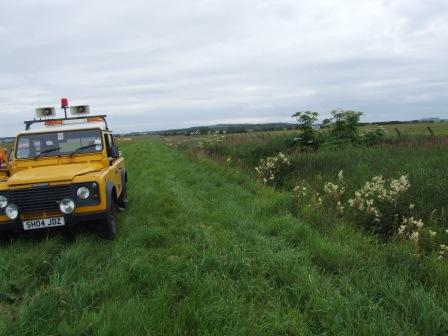 10 minutes work was all that was involved but we also had a tour of the airfield to ensure there wasn’t more that had been overlooked.
The Red Arrows flight team were preparing to take off as we left the runway area.