The full team was out today for our first day electrofishing of the year. We completed 11 timed sites on the River Doon, starting at Doonfoot and finishing at Ness Glen. We fish the same sites each year and we have nine years data now for the Doon so we can start to see some trends.

It was clear from the first site this morning that there were a lot of salmon fry about. In five minutes electrofishing in the riffle above Swallow Braes we got 120 salmon fry. That was in five minutes total, including transferring the fish from the net into the bucket etc. 24 fry per minute is very good, we have only had about three results from across Ayrshire better than that.

The results at most sites were good, in fact from my quick summing up I think the average results this year are the best we have recorded from the Doon.The trend for the last few years on the Doon has been improving so it is good to see that maintained.

The survey sites are all shallow fast flowing water suitable for salmon fry but the substrate, depths and flow vary from site to site. The photo below shows the Doonholm site. Generally the water was about 200mm deep, run and glide with about 40% weed cover. 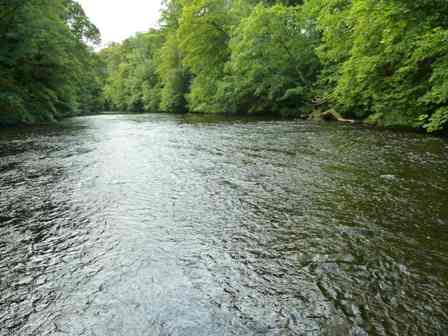 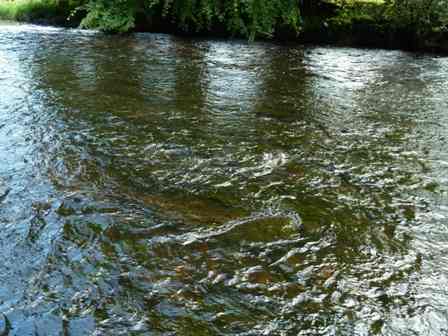 We found a lot of fry at the Doonholm site as well as a few of last years parr. One had a deformed tail, maybe someone stood on it last year! 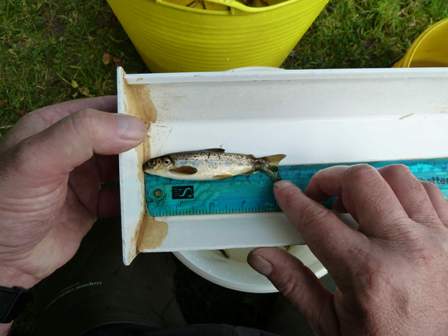 At the Holms survey site I noticed a midstream rock sticking above the surface with lots of mayfly eggs on the underside. The adult mayflies land on these midstream rocks and crawl underneath to lay mats of eggs. This rock  must have been used by hundreds if not thousands of mayflies, the eggs were several layers thick in places (note the rock was returned to its original place). 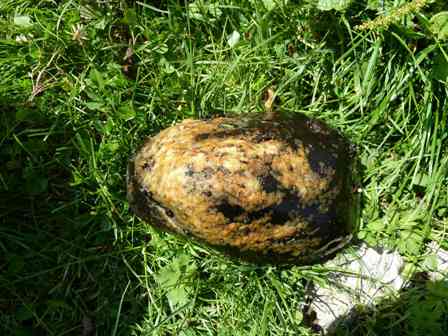 Further upstream we met Freddie Taylor, the beat ghillie, at Smithston where we have a survey site. There we found slightly more salmon fry than last year although it was the second lowest number per minute this year, still more than adequate though. Freddie’s had his family with him and they enjoyed seeing the electrofishing and invertebrate sampling (ouch…that’s a bad angle for my stomach!). 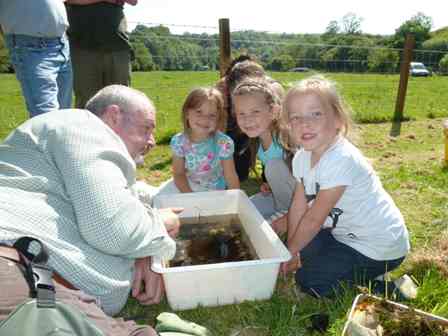 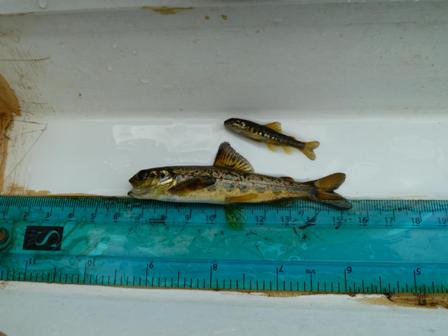 A very interesting day; good to survey the entire main stem in one day. It highlights the changes that occur from the top of the river to the bottom, the size and growth of the salmon fry, the change in the pH and the invertebrates present. It also shows the massive difference between the Doon and the neighbouring River Ayr. On the Ayr we struggle to find fry in the lower river, although it does have a huge area of very productive upper river and tributaries.