With the assistance of  Tommy Thomson, the River Superintendent, we surveyed eight sites on the Water of Girvan today, starting at Tairlaw Bridge, close to the upper limit of natural salmon access. We found good numbers of salmon fry here and they were significantly bigger than the upper Doon site we surveyed earlier in the week. However it is lower altitude and the water is much more productive in the upper Girvan than the Doon just below Loch Doon.

As well as surveying fish numbers we also look at the  invertebrate population at a selection of the sites. At the next site, Craigfad Bridge at Balbeg, we found an excellent and diverse range of invertebrates with many large stonefly nymphs. We also found 106 salmon fry in the 5 minutes, a good result. 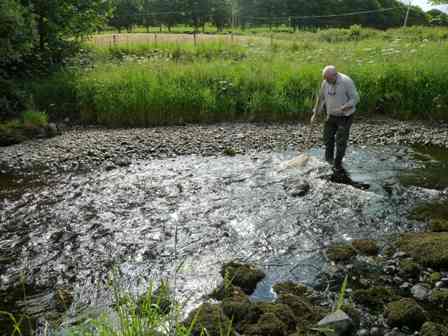 The river is small at this point  but it is an important salmon spawning and nursery area.

At the site above Merkland Bridge we found 79 salmon fry, which were much bigger than those in the upper river. The invertebrate population had changed a lot though, no big stoneflies found. 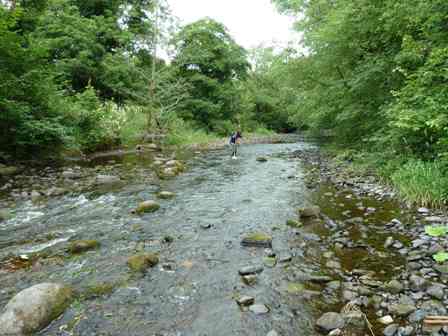 Due to time constraints we had to miss two middle river sites for the time being but we did survey the three lowest sites. Historically the lower river produces much lower salmon fry numbers (in contrast to the Doon!) than the upper river. The site below the Girvan Dykes produced 9 fry in 5 minutes but 16 salmon parr. Most of the parr came in one sweep of the electrofisher close to a partly submerged barrel. Tommy was amazed, he hadn’t seen so many fish in one sweep before!

The other lower river sites, upstream of Enoch Farm and at Cairnhill Farm produced slightly higher numbers. We haven’t had time to look at the figures in any detail yet but it looks like average or above average salmon fry numbers from the sites surveyed.

The invertebrate samples in the lower river were quite different to those in the upper river, although overall abundance was probably greater. The fish population was much more diverse in the lower river with flounder, minnows, stone loach, and eels found in the lowest site as well as the usual salmon, and the much less usual trout.

Thanks to Tommy for his invaluable assistance.