I was given a couple of trout from the River Ayr to compare yesterday. Both came from the same stretch near Failford and were almost identical size at about 13″. The captor complained that one of the trout fought like a ‘Goldfish’ while the other stripped line from the reel. No prizes for guessing which was which! (see the photo below). 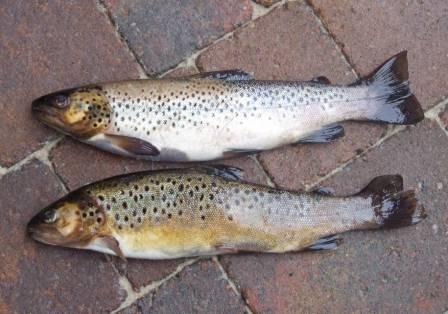 The two fish were almost identical size but obviously one was wild and the other stocked. Needless to say the stockie was the poorer fish. But why didn’t it put up a better fight?
I looked at scales from both fish. The wild trout was a 3+ fish ie it was in its 4th year of life. The stockie was a 2 year old fish that showed no plus growth at all despite the time of year when food is plentiful. The stockie was obviously struggling to find adequate  food to survive and grow and therefore lacked energy. Perhaps the lack of fins didn’t help either. The scales from both fish are below (the stockie’s being the single scale at the bottom that shows almost uniform growth throughout). 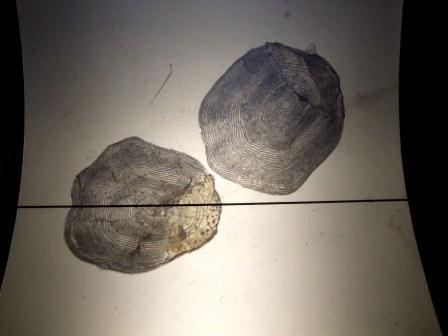 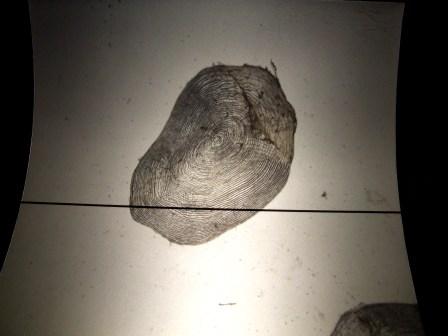 There really isn’t a shortage of wild trout of this size in the River Ayr which raises the question ‘Why stock with inferior trout?’ or possibly ‘why stock at all?’  Surely anglers would rather catch a sporting fish in good condition rather than a weak stockie that hardly fights?

What impact has stocking fish like these on the wild trout population…. well that won’t be answered here but we should consider competition for space, food and also the implications that these fish have on native genetics. Perhaps limiting stocked fish to triploids that can’t breed (unless they are from native stock) would be sensible but I’ve heard it argued that they cost too much!

The arguments for and against stocking will rage on but this comparison certainly gives us all food for thought.

As an update to the post, last night I caught a 13″ trout on the Lugar and it was female and in great condition. Again this was a wild trout and the scales confirmed this. This trout was 2 years old with massive plus growth this year. Roe was developing within. 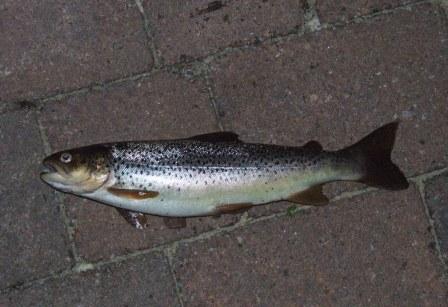 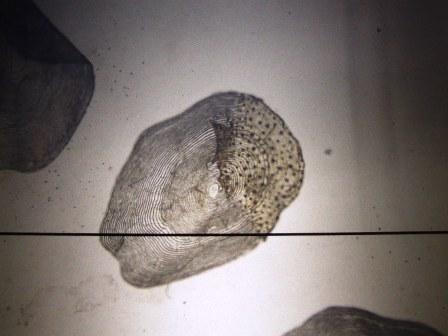