Ayrshire is a very diverse area in terms of human population density, landuse, geology etc. This is reflected in the characteristics of its rivers. Whilst the water in the Ayr may look similar to that flowing down the Stinchar measurements of parameters such as conductivity reveal large differences in water chemistry.

Conductivity is a measure of the amount of dissolved substances, e.g. minerals from groundwater, agricultural run-off, sewage inputs and frequently in Ayrshire,  iron associated with historic mining activities. The conductivity of water varies hugely; distilled water is very low conductivity whilst the conductivity of seawater may be thousands of times higher due to the accumulation of salts.

Within each catchment in Ayrshire there are large variations in conductivity amongst the tributaries. The geology of Ayrshire is very diverse, ranging from the granite hills in the upper Doon (very low  conductivity burns) to the coastal burns draining the volcanic hills between Girvan and Ballantrae (high conductivity). In some ways conductivity can be used as an indicator of freshwater conductivity although if high readings are due to high iron levels then the opposite may be the case. Also if high conductivity is the result of human activity, e.g. sewage or agricultural run-off then water quality issues problems may reduce potential productivity.

The maps below provide an example of the typical range of conductivity recorded by Trust staff during survey work in the Ayr and Stinchar catchments. It should be noted that conductivity will vary seasonal, even daily; depending on river levels, and the relative contribution of groundwater and surface water run-off. The same colour code has been used in both maps so differences between the two rivers should be obvious  (sorry about the poor resolution, I’ll try and improve later) 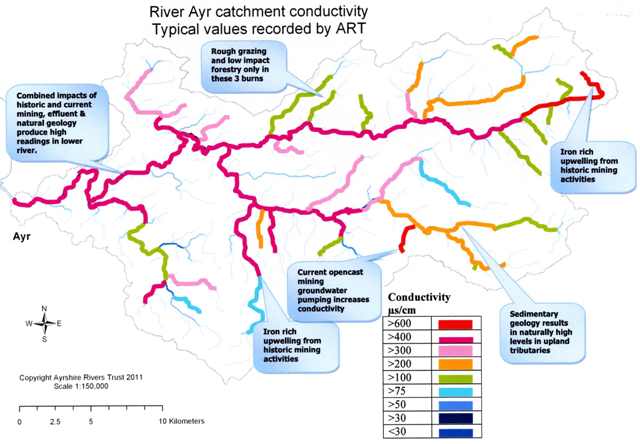 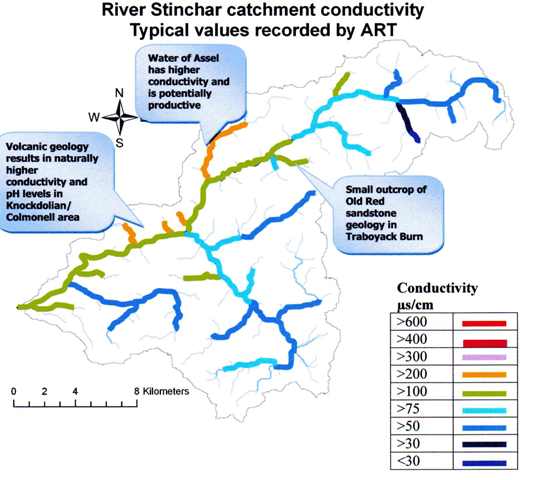 It can be seen that nowhere in the Stinchar catchment regularly exceeds 300microsiemens/cm, whereas in the Ayr there are very few areas where the conductivity is lower than that. There are major differences in the underlying geology; the Ayr catchment is dominated by sandstone and limestone, relatively soft rocks which dissolve readily releasing minerals, whereas the Stinchar is mainly Ordavician shale, a harder material.

As mentioned above conductivity provides an indication of productivity but there are so many other factors involved affecting  juvenile salmonid densities including habitat, water quality, competition etc, that it is not as simple as saying that the Ayr is more productive than the Stinchar. Due to the geology the conductivity in the Ayr would be naturally higher than found in the Stinchar, and human activities have exacerbated this difference.

The fish populations in each river are different; there are no stone loach in the Stinchar, a species which is abundant throughout the Ayr. The biomass of fish is undoubtedly generally higher in the Ayr, but parts of both catchments support high juvenile salmon densities and the typical smolt from each river will be two year old, and of a similar size.