A few snaps of fish caught whilst electrofishing. The first three photos are from upper Stinchar burns, the lower two from an Ayr tributary.

The picture below shows two salmon parr but there is a major difference between them. The bottom one is more highly coloured as it is a precocious (mature) male parr. These little fellows are running with milt from September onwards ready for the onset of spawning. It’s a long wait though, usually December before the salmon spawning gets underway around here. Studies have shown that up to 40% of the salmon eggs in some  redds were fertilised by precocious parr. 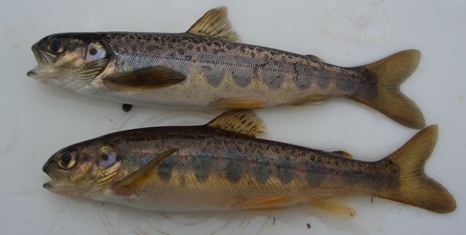 The picture below shows two fry but as soon I saw it I thought the one on the left looked like a possible hybrid. The body was chunky like a trout but the tail and head looked salmon like. Trout/salmon hybrids are not unusual, we see several fish each year with an intermediate appearance showing characteristics of the two species.

This trout had a nice red spot on its adipose 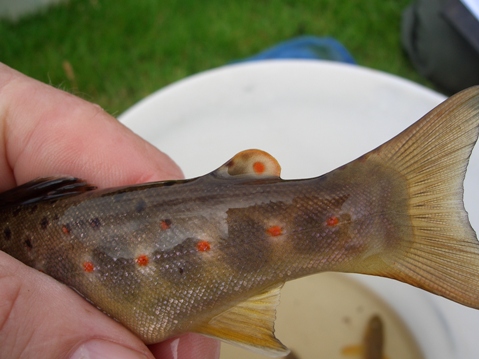 The next two photos show trout caught in a small burn near Mauchline. They were 131 and 144mm in length but the scales showed them to be this years fish. I don’t recall ever seeing larger trout fry. It may have been a poor summer for plant growth but we are seeing a lot of well grown salmon and trout fry. There was an abundant shrimp population in the burn were they were found;  good protein packed trout food.

They both had identical damage to the tail, I wonder if there is an explanation for that? Had they spent some time in a hatchery?