By Stuart Brabbs On September 21, 2011 · Add Comment
It has been around 10 weeks since we stocked Darley and Slaphouse Burns with water voles. Since then mink tracks appeared on a raft on the middle Slaphouse about 3 weeks ago and today on 2 rafts on a tributary of the Darley Burn. Despite our best efforts we failed to catch the Slaphouse varmint but it appears to have moved on as there has been no further signs of it anywhere on the burn. Darley Burn catchment has been clear of mink since last year until tracks turned up on 2 rafts on the upper Cross burn today which we discovered during routine checks. By late afternoon three traps were set and hopefully we will have it by the morning. This is the time of year that young mink disperse from their mothers in search of new territories and all the tracks we found have been small and would support this theory. 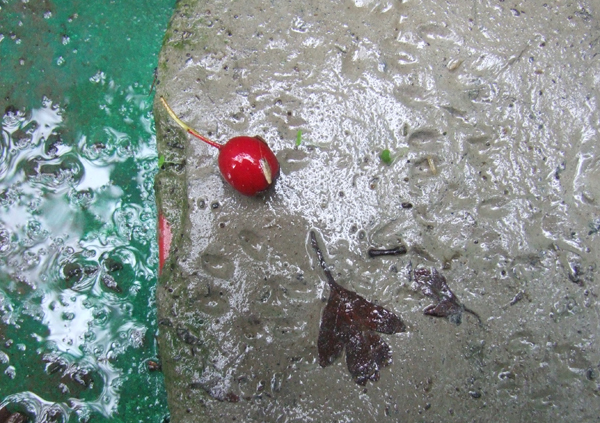 A mink footprint below a hawthorn berry

Lower down the catchment on another raft we found a small and somewhat indistinct otter track on another raft and spraint on a pipe across the burn. This raft had also been well used by what I think were rats but could also have been voles (they are very similar). Judging by the lack of other water vole evidence, I opt for rats at this location. 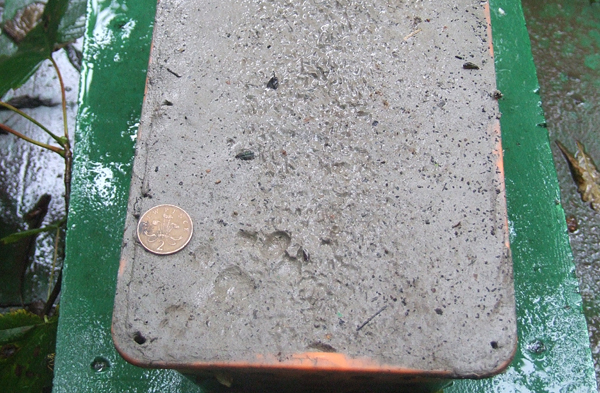 We commenced trapping water voles yesterday in order to assess their growth rates and dispersal since release. All released animals were chipped so that we could identify them if we caught them at a later date. We caught a single animal yesterday and 7 today. One of todays animals we caught twice at different locations 250 metres apart. Another sadly died in the trap for no obvious reason but this is unusual as these animals are quite robust. It had been in the trap for no more than 5 hours between visits. This is so disappointing considering our whole purpose is to re establish and protect these animals and the information we gain from trapping them will greatly assist others with similar projects. Despite the risk of the occasional casualty trapping is an essential component that we will persist with for the time being at least but with caution. We also came across the decomposed remains of a vole but couldn’t get a chip reading from it. That doesn’t mean it was a wild vole but of course that can’t be ruled out although there was no evidence of any before the release.
It was reassuring to trap so many voles in such a short space of time. Those identified all appeared to have gained weight and seemed to be in good health. Kirsty Griffiths from SAC is assisting with this work as part of her 4th year Honours project and this is much appreciated. She managed to get the water vole to pose nicely for the photo below. It’s all great experience for an undergraduate that should help in her future career.
The Water Vole Project pages on this site will be updated shortly with more details of our research and results. 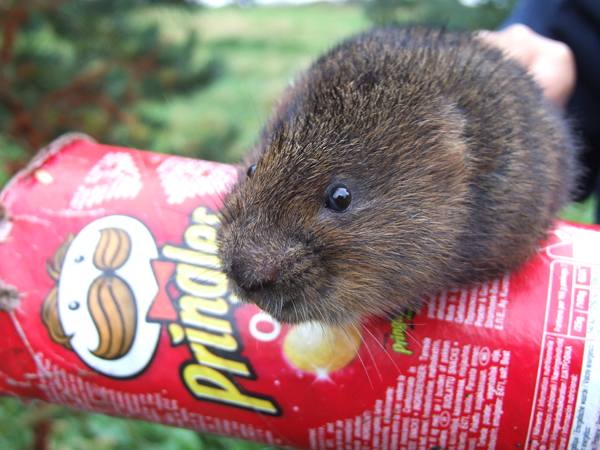 Posing for the camera

Update.
Water levels rose rapidly overnight on Wednesday/Thursday so we decided to stop trapping for safety’s sake.When we arrived to lift the traps, one contained a very small water vole that had no chip; effectively we had caught a youngster bred from the animals we stocked. When Kirsty released it it squeaked for its mother who dutifully arrived on the scene. This is great news and reassures us that our efforts are worthwhile.
We have ceased trapping until the weather improves. Interestingly, in the uppermost trap next to the flats at Marr College playing fields I found a brown rat that was duly dealt with in an appropriate manner. Rats will predate water voles but obviously they are managing to co exist at the moment as we had trapped a vole within 2 metres of the rat the day before.We will monitor the burn upstream of this point as the habitat is quite different and I suspected rats will be the dominant mammal in this stretch. Where there are people, there are always rats.
Mink trapping continues as we still haven’t caught the animal in the upper catchment.
More Trout Photos Water Vole Survey training course
Share →
Tweet