Contrary to popular belief salmon do spawn in the main stem of rivers; not just the tributaries. And in a river like the Doon, which has a long and narrow catchment, with few tributaries of any size downstream of Loch Doon,  over 70% of the habitat suitable for juvenile salmonids is to be found in the main stem. Given the importance of the main river for salmon production ART established a system of timed electrofishing sites in 2003/4.  The monitoring technique involves a team of three electrofishing in an upstream direction in riffle/run habitat using a banner net to capture the fish. These surveys are always carried out in low water conditions during July and August.

Over the years some of the original sites have been dropped due to unsuitable habitat or challenging survey conditions but we now have a well established selection of sites in the Ayr, Doon, Girvan and Stinchar.

The results from the four monitored rivers over the time series are shown below. The sites in each table are ordered in an upstream direction, e.g the top row is the site nearest the sea. The mean (average) number for each year is shown in the bottom row. In these tables green is good, red bad. 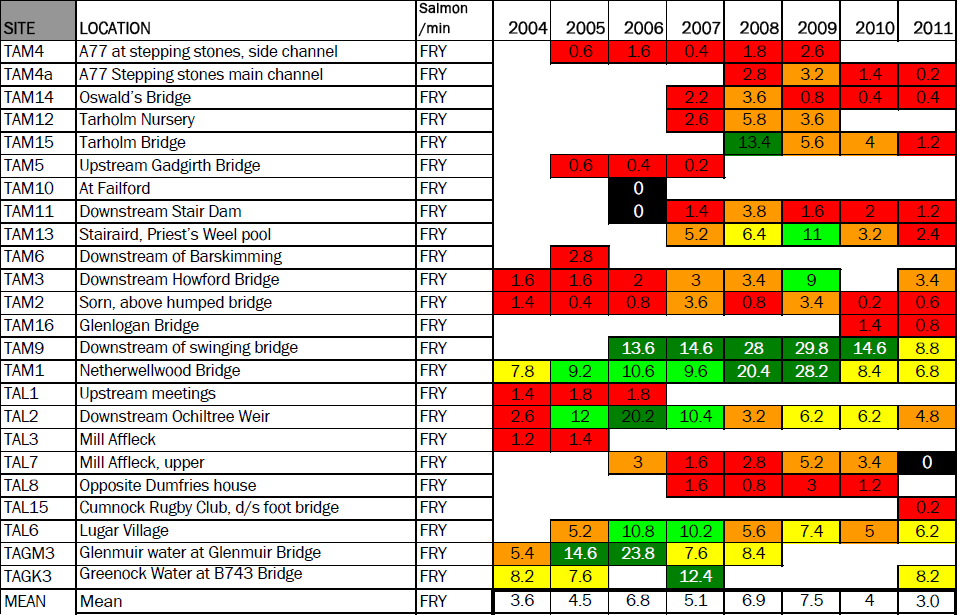 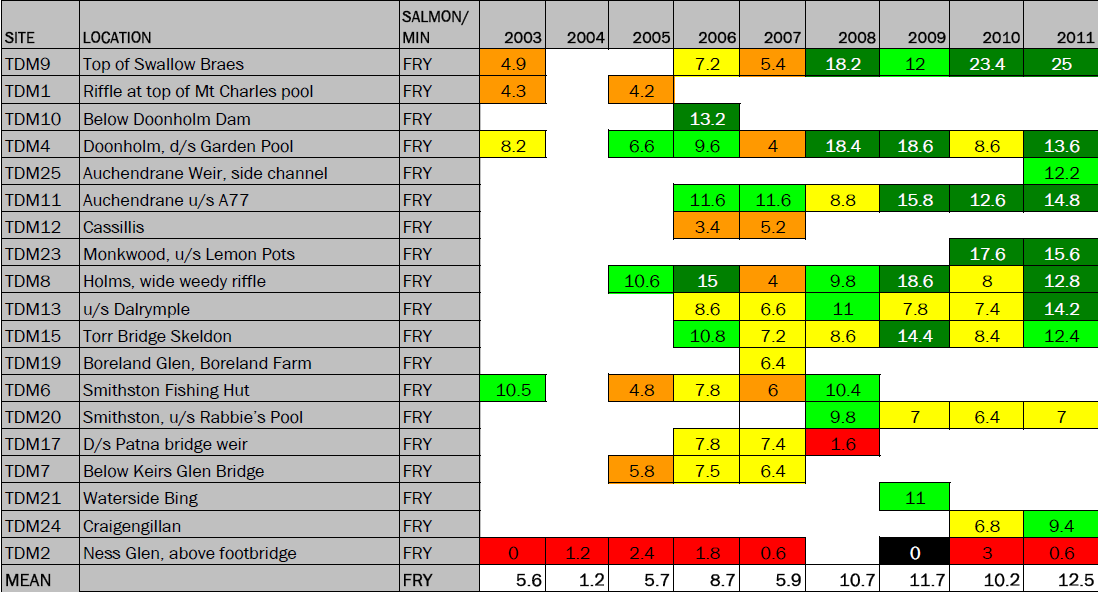 Ideally we want to find high salmon fry numbers  throughout all sites but as the classification system is based on the results from the previous five years there will always be a range of results present.

It should be clear from the tables above that the abundance of salmon fry in the Ayr and the Doon are quite different. In recent years the salmon fry numbers in the Doon have increased with the 2011 results being the best since 2003. On the Girvan the results have been variable but relatively good in recent years with the 2009 result from the Girvan being the best mean result from any of the rivers. Similarly the Stinchar results are generally good with only one site in the entire sequence in the very poor category.

The following example highlights the difference between the Ayr and the Doon. On one day this summer we surveyed 10 sites on the Ayr,  5 minutes surveying at each site, covering the Ayr from the top of the river to the bottom. We found a total of 150 salmon fry. In contrast in one site in the Doon, at Swallow Braes, we found 125 fry in five minutes! No sites in the Ayr catchment were classified higher than moderate this year.

Since we began the main stem monitoring we have consistently found low salmon fry numbers in the lower reaches of the Ayr, so of more concern is the drop in numbers in 2011 at previously highly productive sites, TAM9 & TAM1. The sites downstream of these, TAM2 & TAM16, both in the Sorn area, have never produced high fry numbers although we consistently find high salmon parr numbers (one year + old fish) at these sites. An important mechanism for populating these sites with parr is the downstream migration of parr in the spring. When we operated a smolt trap on the Ayr we trapped many salmon parr in early April. These were fish of 60-80mm moving downstream in advance of the main smolt run, but which were too small to smolt that spring, As there is a lot of good, but lightly stocked with fry, habitat in the middle and lower  reaches of the Ayr this downstream movement would appear to be a good survival strategy. Once established in good habitat these downstream migrants will  grow on. This fits exactly with the parr distribution we find in the river. In some middle river sites parr outnumber fry by a considerable margin. These parr are often large, 120-160mm, and will leave the river as big two year old smolts the following spring.

If salmon fry numbers in the formerly productive  upper reaches of the Ayr drop there will be more than just a local impact. If the movement of surplus parr in the spring (or at other times of the year) from areas of high fry productivity to areas of low fry productivity is an important factor, and we think it is, there will also be a knock-on reduction in parr numbers further downstream.

Low juvenile fry and parr numbers will ultimately translate into low numbers of returning adults, with poorer sport for anglers as a consequence.

Our data suggest that salmon fry numbers are healthy in the Doon, Girvan and Stinchar but the Ayr results are worrying. What factors could be responsible for the poor results in the Ayr? The Ayr is a large and diverse river so there may be different factors in different area. The chocolate brown colour of the lower Ayr is a familiar sight to local residents. The colour is due to the high silt loading, a consequence of the intensive agricultural landuse in the middle and lower catchment. The negative impacts of silt on salmon egg survival in the spawning redds are well understood. In the upper river siltation is less of a concern but the impact of the iron rich mine upwellings and groundwater pumping from the opencast mines on egg survival is not understood. We have carried out some preliminary studies on salmon egg survival in the Ayr throughout the catchment but more work needs to be done to try and determine the factors involved in a statistically significant manner.

Another factor, which should be easier to control, is exploitation through legal means, e.g angling and illegal – poaching. Over the last two decades fishery managers in almost every river supporting salmon have encouraged the adoption of catch and release as a conservation measure. Throughout Scotland catch and release rates have been increasing and on rivers such as the Spey over 80% of the salmon caught in 2011 were released. The published catch and release rate in the Ayr remains one of the lowest in Scotland, much lower that achieved on the nearby Doon, Girvan and Stinchar. Data seen by ART from other rivers of a similar size to the Ayr shows that the number of fish caught by anglers on the river can be as high as 50% of the total run. Combined with a high level of catch and kill there will be a significant impact on the future productivity of the river.

Reports from a variety of sources suggest that the number of fish removed by poaching in areas such as Catrine continues to be significant, and may well have increased in recent years. Exploitation of the stock by whatever method will result in a reduction in the number of fish available to spawn.

The results presented above were discussed at the Ayr Fishery Board meeting this week where it was felt that the results needed to be made more widely available, hence this lengthy blog! It was clear from discussions at the meeting that 2011 had not been a good year on the Ayr. The attitude towards catch and release on the Ayr is improving slowly but ART consider that lack of spawning fish is a factor contributing to the current low salmon fry numbers in the Ayr.

The consequence in future years and for future generations of anglers should be clear.