Spawning on the ever changing Greenock Water

We have looked for evidence of spawning salmon on the Ponesk Burn since the 17th December without success. Either the fish aren’t there or we missed them.  As we haven’t found any redds or carcasses on the Ponesk, it would appear that it is a lack of fish rather than our timing that is the problem.

Yesterday I decided to have a look at Netherwood on the Greenock Water where we normally see plenty of fish and redds. Disappointingly I only saw one salmon, two carcasses and few possible redds over a distance of around 1 mile but visibility was poor and water levels remained high so I will check again in a day or two. In previous years this area has always been well populated with spawning and spent fish in late December.  We usually find carcasses lying partially eaten all over the place left behind by otters that make the most of easy pickings. 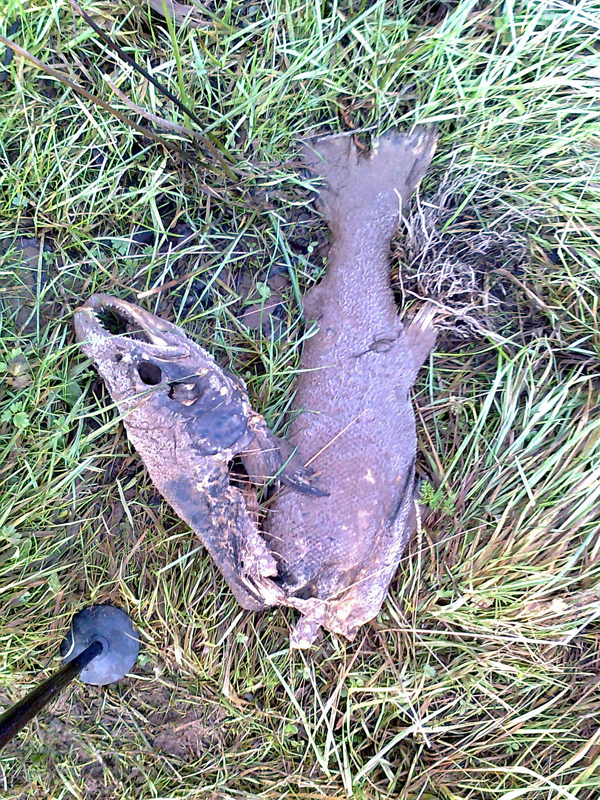 The larger of the two carcasses we found.

Perhaps many fish survived spawning and dropped downstream in high water with redds being flattened out by prolonged spates. I suppose we will only know for sure once we complete 2012’s electrofishing surveys in the summer.

As I walked downstream from Netherwood Bridge, I couldn’t help but notice that the river is highly mobile and the remains of old river channels are frequent. In a high energy stream this mobility isn’t uncommon but it does contribute to diffuse pollution and raises the possibility that better riparian management could lead to more stability and reduced nutrient inputs. On the Greenock Water, there are few riparian trees and although there is stock fencing, it is noticeable that sheep are allowed access during winter when the fields are over grazed and this is reducing both bank stability and the effectiveness of the buffers. Stock fencing in riparian areas is frequently subsidised through SRDP with the aim of creating buffers and reducing inputs but this becomes ineffective where the riparian margins are used as overwintering grazings!

With the River Ayr suffering from the effects of diffuse pollution, perhaps we should be working with more landowners to improve these buffered areas. Following noticeable reductions in fry numbers in 2010 and 2011, we suspect that egg survival may be reduced as a result of inputs. We hoped to research this with egg survival trials this winter but high water levels has so far prevented us from achieving this, however there may still be an opportunity available in next couple of weeks depending on flow and the availability of eggs. We also intend to monitor conductivity and oxygen levels throughout the catchment.

Compare the images below from 1945 and 2004 (available through Google Earth). 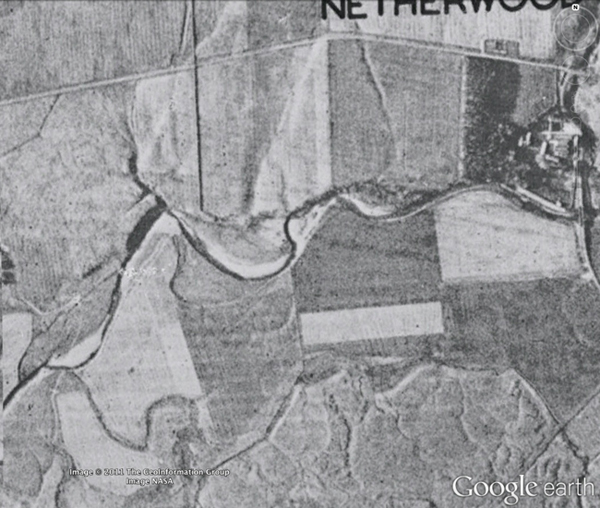 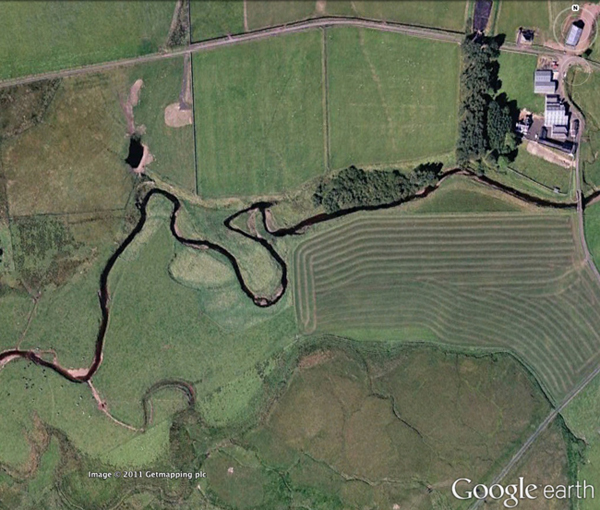 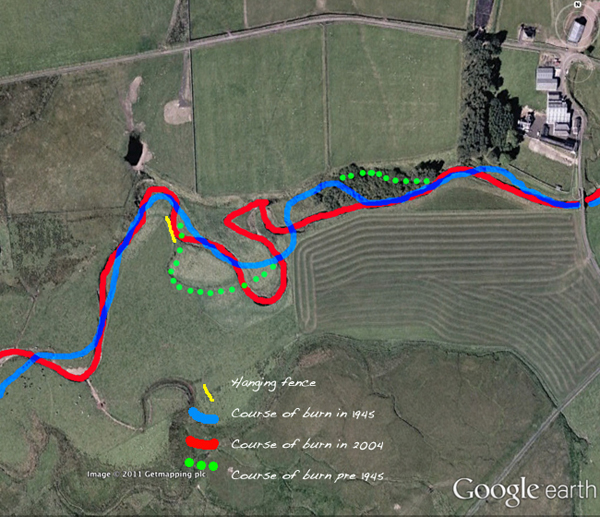 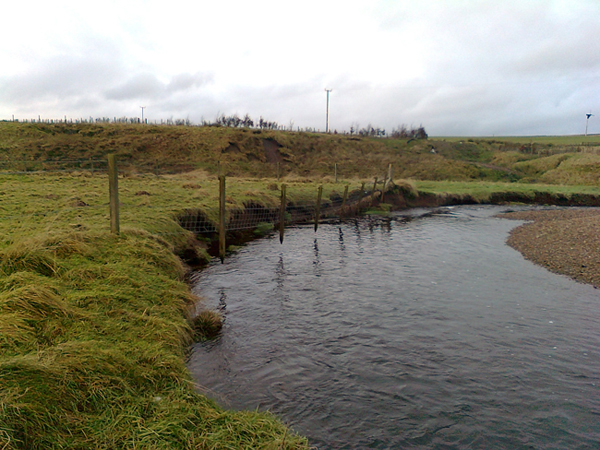 Since the 2004 image, over 4m of soil has been eroded leaving this fence hanging.

The pictures illustrate the highly mobile nature of this burn over at least a 59 year period. I overlaid the 1945 course of the burn (blue) with the most recent available from 2004 (red). The green dotted line indicates the course at some time prior to 1945. The photo of the hanging fence illustrates erosion since 2004 when there was at least 3m of bank between the river and the fence. The Ayr isn’t the only Ayrshire catchment with mobility issues and we are looking at green engineering solutions (willow planting and reinforcement) elsewhere as possible solutions to some of the problems.

One Response to Spawning on the ever changing Greenock Water