Despite massive Press and media coverage and the endless efforts byorganisations such as ourselves, there remains the huge problem of lack of awareness when it comes to dealing with Japanese Knotweed (and other invasive non native species). ART has been active delivering seminars to Local Authorities in an effort to halt the spread of INNS, especially by frontline staff that come into contact with these plants. Of course, it’s not just LA staff that risk spreading these plants but Utility companies and many others too.

On Tuesday morning, I came across a Utility company loading a lorry with spoil dug from a road. Inadvertently they had also picked up a small quantity of Japanese Knotweed from a roadside stand growing on the verge. The contractors hadn’t realised that JK was present and failed identify it during the site survey prior to the works. It is unclear at present who is ultimately responsible for this incident but undoubtedly the general public will pick up the tab in their water rates. 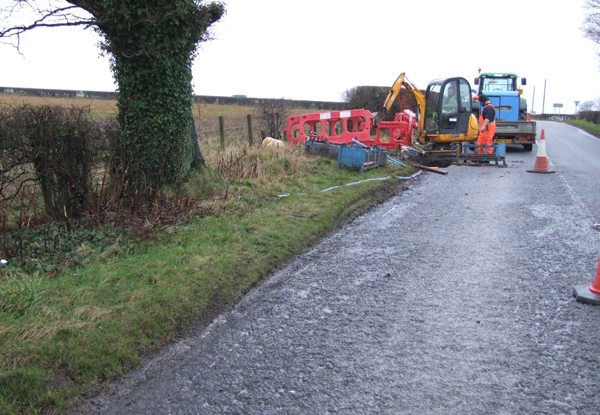 The site where Japanese Knotweed was accidentally disturbed

When I informed the road crew of the situation, they wanted to dump the load back out onto the site (which of course is illegal as JK must be disposed of in a landfill licensed to accept this type of waste). To cut a long story short, the contractor had to dispose of the load at a huge cost (£900 + VAT) which could have been avoided had someone recognised and been aware of how to deal with this plant properly.

I have offered to assist with awareness training and will negotiate this through Scottish Water and the two sub contractors involved. Only by training their staff will this scenario be avoided in future. Hopefully some good will come from this incident.