Predictably, the dry spell came to an abrupt end and water levels rose early this morning preventing the contractor finishing the last weir wall at Black Rocks in Kilmarnock. When I checked the levels this evening, I was pleased to see the level of water maintained behind the upstream dam. Bearing in mind that the fish pass sections remain open at the moment (until the precast sections are fitted), the final levels won’t be far off this evening’s height which certainly reduced the obstacle of the falls significantly. 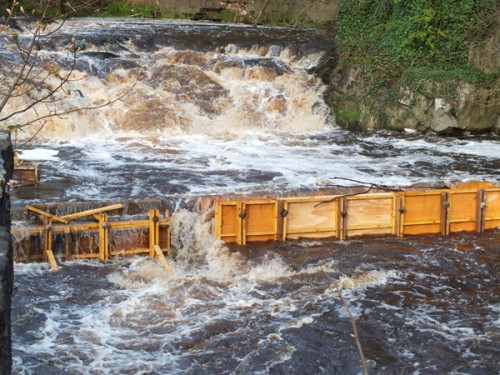 6.00pm this evening and the river was in good flow. The height of the falls has reduced by around 1m

Once the fish passes are fitted and the take off pools sealed, I expect that fish will have little problem negotiating the weirs and the falls in spate conditions as the passes and main flows are well aligned. Fish should be encouraged to pass this obstacle quickly and with little risk of  being snigged by poachers. It has to be hoped that Kilmarnock AC will monitor this area well as today I met an angler who remains adamant that fishing should be allowed in this area. I hope that the club will insist that any salmon and sea trout caught on Kilmarnock Water catchment are returned alive for the next few years to encourage natural stocking to take place unhindered. Experience on the Clyde and Tweed catchments has shown that once barriers and problems are removed, natural spawning very quickly leads to re population of sub catchments with the Kelvin, White and Black Carts, Leader, Gala and most recently the Whiteadder being prime examples. During the fish rescue recently performed a short distance downstream, we found a healthy population of salmon parr and smolts. The potential is clearly visible on the Kilmarnock Water for natural regeneration without interference. The salmon parr and smolts rescued were relocated to locations upstream of the Black Rocks and this should help to speed up the process of natural re colonisation in the next few years. The smolts will by now have made their way downstream to the River Irvine and perhaps out to sea.

Once the Dean Ford is bridged, many miles of excellent habitat will once again be available for migratory species.  The photograph below shows the Ford this evening and illustrates why this obstacle is almost certainly impassible. I did hear anecdotal evidence of an occasional salmon further upstream but no one has yet shown any hard evidence of this. (In 2008, ART electrofished a few salmon parr at one site but I believe this followed a stocking by the club in the previous year). 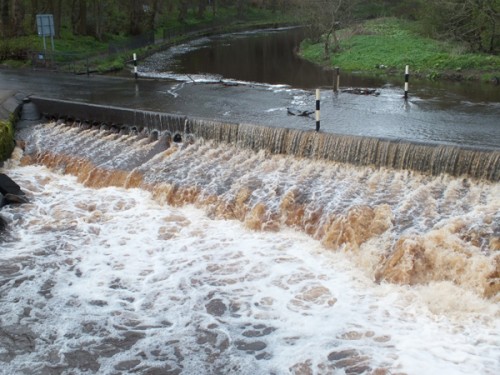 Dean Ford presents the final major barrier to migration on this catchment.

The photo below shows the site nearing completion and gives an indication of where the final levels will be. Lets hope that the rain holds off for the next couple of weeks to allow this work to be completed. 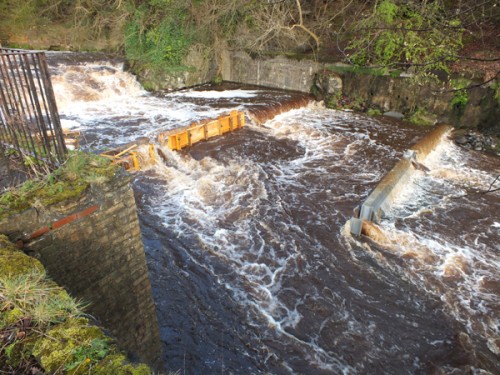 Just one more wall to be constructed but everything is looking good so far.