Although not an issue in Ayrshire at present, American Signal Crayfish (ASC) are all around us on the Clyde and in Dumfries and Galloway and they pose an enormous threat to our salmonid populations should they ever be introduced. Last year we had two reported sightings in Ayrshire but neither have been confirmed. With this in mind, ART staff have always been keen to take every opportunity to learn the very latest control techniques and this week Meryl, Gordon and myself headed to Ballachulish in Lochaber to assist with an emergency eradication attempt by Lochaber Fisheries Trust, Highland Council and Forestry Commission Scotland.

A panoramic view of the large pond

The aim was to treat two quarry ponds in Ballachulish where ASC were first recorded 10 months ago in the larger of the two lochans. The smaller pond was to be treated as a safeguard as no crayfish had been trapped there despite its close proximity to the large pond. The larger pond is around 18000 sq m with an average depth of around 2m and a maximum of 11.7m. The cost of this project is around £80K of which £35K was for a biocide (Pyblast) to treat the water. Several Trusts provided staff to assist including the Annan, Galloway, Connon, Ness and Beauly and of course ART. Other helpers came from Forestry Commission, and Highland Council, SNH and SEPA (a total of around 25 people over the two days assisted). Why did so many organisations provide assistance? The answer is simple really, biocide treatment is a relatively new and very much a developing method. Trusts in particular recognise that pulling resources in times of need can produce results. Lochaber FT couldn’t have managed this without help and neither could we if we had a similar emergency. 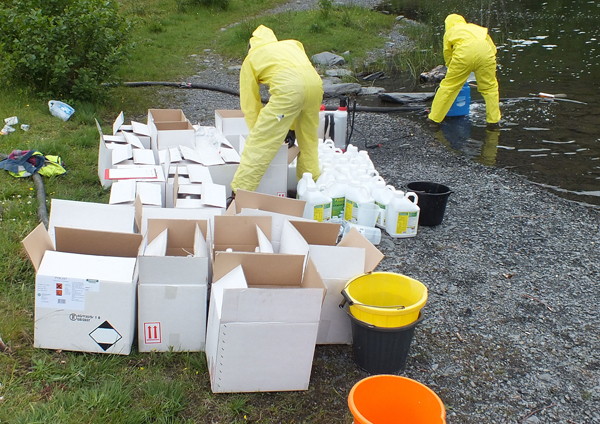 There were gallons and gallons of chemicals to apply

There was no better opportunity to gain this invaluable experience and capacity building will only strengthen and prepare the Trust  should similar challenges arise. At present, Biocide treatment provides the only realistic opportunity to eradicate these creatures and only if used early and in particular circumstances. Once established in rivers and large lochs it is virtually impossible to eliminate ASC. Prevention is absolutely essential; just consider loch Ken and the impact that ASC has had on angling and the economy!

Anyway, I’ve posted a few photos taken over the last two days at Ballachulish. The result of everyones efforts won’t be know for some time but hopefully no crayfish will show up in the ongoing trapping exercise that will continue for at least 5 years before success can be claimed. Even if a single animal survives, then this whole exercise will have been a failure and re treatment may be required. Unfortunately, the biocide treatment also kills fish and invertebrates although the toxcicity should have cleared within a few weeks. Sticklebacks, newts, frogs and toads were know to inhabit the ponds, With no link to other watercourses, no trout or other fish species were thought to be present and had never been seen. 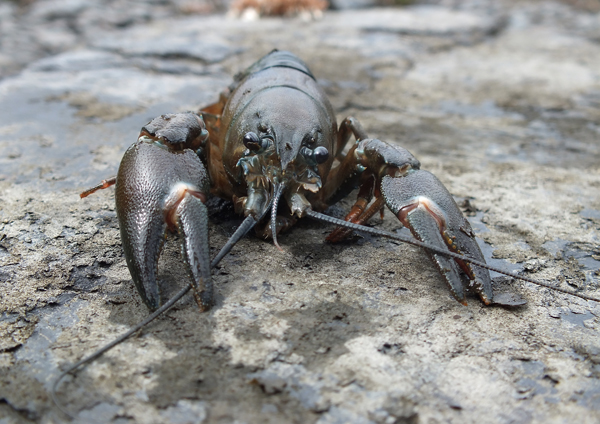 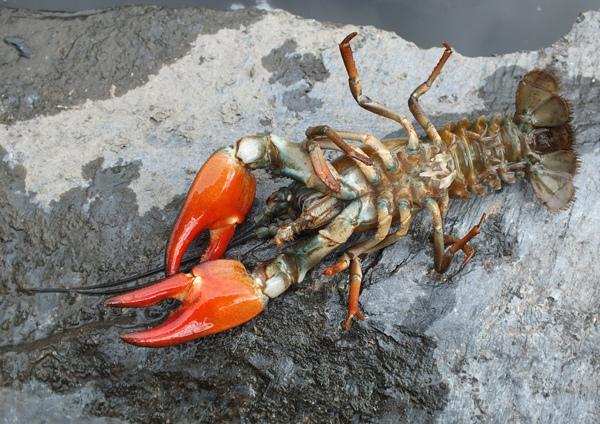 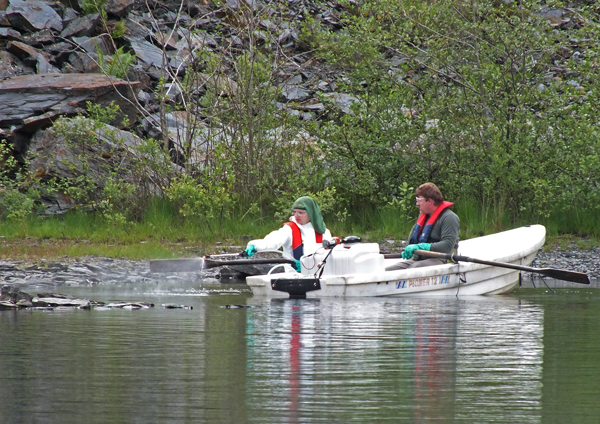 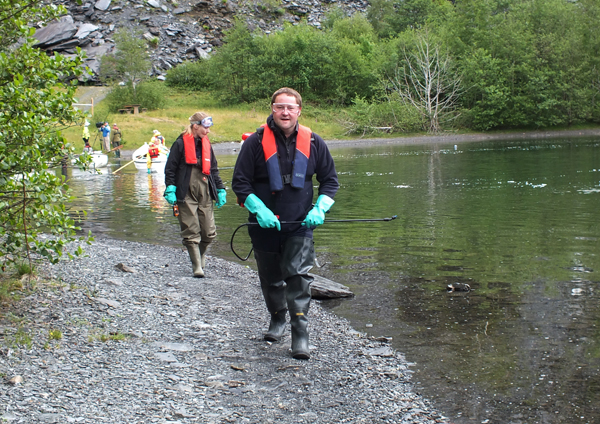 I did mention earlier that there weren’t meant to be any other fish in the pond but we did see two huge eels and a large brown trout which beached itself trying to escape the irritation of the Pyblast. Sadly this stunning fish couldn’t be saved and it was chapped on the head as it wouldn’t have survived. I’m awaiting confirmation of the weight of this fish but I’d estimate it at 6 1/2lbs. Colin Bean from SNH took it away to see what it had been eating and will let me know it’s details. I have scales which I’ll look at tomorrow. (UPDATE: I looked at the scales today and it was 5+ years old. The + means that it was in its 6 year of life and still growing).  The colour and condition of this fish was amazing and I was very sorry to see it killed but sadly there was no option. We did look across the bottom of the pond following treatment using an underwater camera but never saw another trout so I presume it was the only one and stocked by someone from a local burn or loch. It probably grew fat on young crayfish. 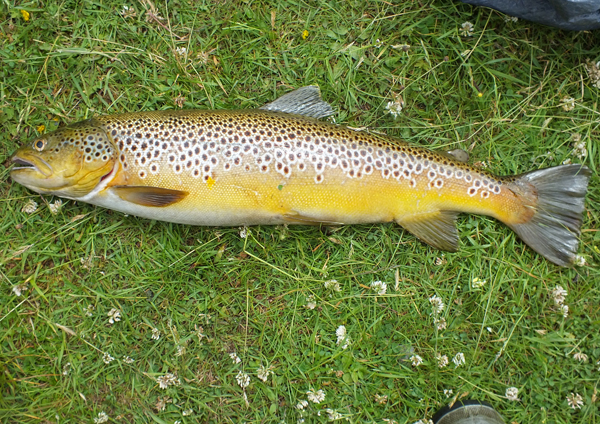 After day one we had planned to move onto the smaller pond but this was abandoned as we found a few crayfish still alive (but only just) on the morning of day 2. These survivors were located in two very deep areas where the biocide had failed to reach the depths. A new strategy was hastily developed and we pumped chemicals down to the depths using hoses and knapsack sprayers. We continued adding chemical to the large pond until the afternoon on day 2 and finally completed the task at around 3.00pm. By tomorrow this should have worked and hopefully everything will be dead. Time will tell. 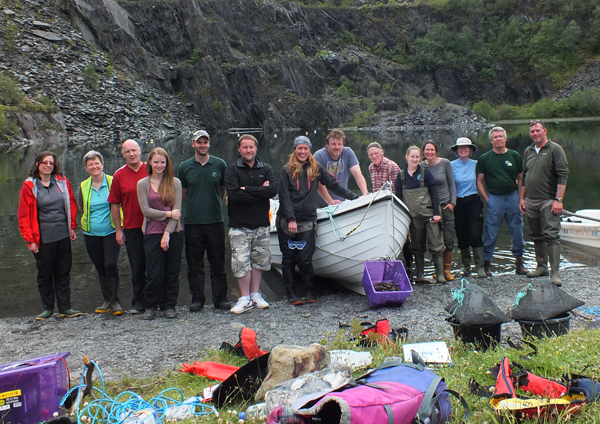 The end of the second day

Finally, Diane and Lucy at Lochaber Fisheries Trust deserve a mention as they managed to pull this eradication attempt together along with the all the necessary funding in under 10 months which is a remarkable achievement. The whole process was well organised and ran smoothly and this was undoubtedly due to their hard work, determination and skills. 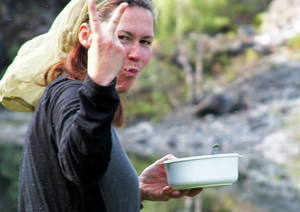 V is for Vegetarian! Diane scoffing her museli as the midges scoffed her! She is normally more friendly than this.