Scales from a big fish

We were fortunate enough to receive scale samples from a 19lb River Ayr salmon caught a few weeks ago on the lower river. The fish had been frozen and the captor managed to take a sample for us after I made the request for which I’m very grateful and I have to add I’m rather envious of his fish as it beats my PB by a fair bit. I’ve posted a few photos  and an explanation of its age and condition below. 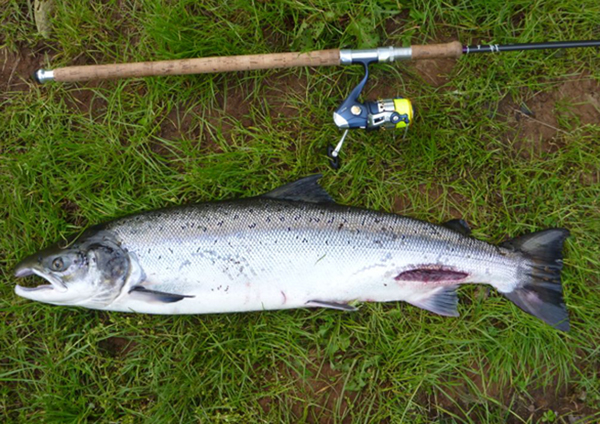 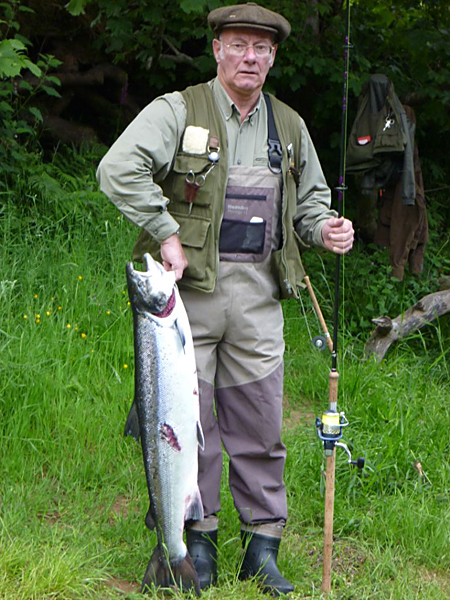 A cracker of a fish

This is a great fish for the River Ayr and although caught in June, I’d still class this as a true Ayr Springer. Due to the prolonged dry spell through April and May, the ‘Spring Run’ has been late arriving so it’s not really surprising that big fish are turning up regularly at the moment and we have had reports of fish up to 22lbs this season. Normally we encourage anglers to release large fish to help with the Spring Run recovery that has been evident in the last few years. On this occasion, the fish was killed and due to the lacerations on each side this was the most sensible option as injuries as severe as these could have become infected in the river and the fish may not have survived to spawning. These injuries may well be the result of an encounter with a seal.

The scales  were examined to determine the age of the fish. In the angling press we often read of ‘grilse’ or 2 or 3 ‘Sea Winter’ salmon or perhaps even ‘multi sea winter’ fish but to determine the actual age you have to look closely at scales taken from above the lateral line and slightly to the rear of the dorsal fin. This is the area where the fry first start to develop scales and we always need original scales to determine the age. Scales can be lost throughout the salmon or trout’s life and these grow back through time but replacement scales don’t carry all the necessary information we need so have to be ignored. The photo of the scale below was from the 19lb salmon. I’ve added a few notes to help explain how we worked out the age to be 2.3 (5 years old or in it’s 6th year of life). This means that the parents of this fish spawned in December 2006. 2006 I remember being a particularly good year for Springers. 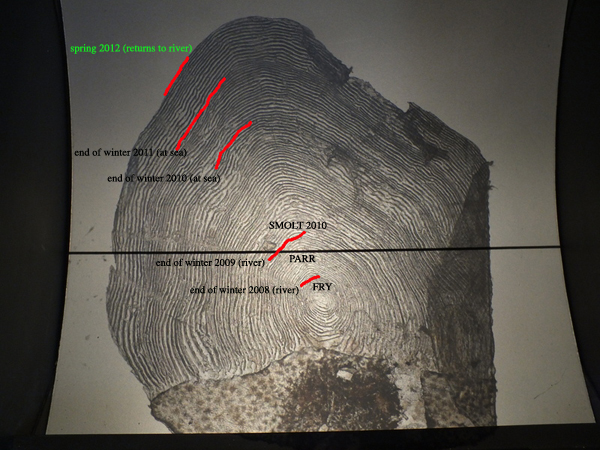 A detailed view of a scale from the 19lb salmon

2.3 means 2 years in the river (fry then parr) followed by 3 years at sea or more correctly having had 3 sea winters. I’ve added red lines to indicate the end of the winter period. Winter periods have closely spaced rings as opposed to summer periods with wider spacing. There are ‘checks’ in the growth rate during the first and second summer at sea periods which similarly are indicated by narrowing of the spacing between the rings, but not enough to say that this was a winter period. Had the fish stayed at sea for a little longer, new rings would have been added to the outer edge and this would then have been written as 2.3+ indicating plus growth in the season of capture. Clear as mud???

Brian often said scale reading was a ‘black art’ and I have to agree. Everyone sees different things but there’s no substitute for experience. We had two or three different opinions in the office before we had confirmation from Ronald Campbell at the Tweed that 2.3 was the correct diagnosis (but of course this is just another’s opinion). Some scales are clearer than others and this one wasn’t the best, nor the worst but I do hope that Ronald agrees with the way I’ve illustrated it here.

Finally, it is worth mentioning that we ran a smolt trap on the River Ayr during spring 2010. We clipped many adipose fins for genetic samples and there is a reasonable chance that some of these larger fish returning this season were clipped in which case we would appreciate hearing about them if any are caught.

4 Responses to Scales from a big fish