Continuing from where we left off last week, we headed back to the Ayr today. Conditions were great and Emma Downie was on hand to assist, so we set off early to look at a couple of new sites.

Having discovered grayling on the Glenstang last week I wanted a further look at this burn. We gained permission from Quilkieston and Trabboch Burn Farms for electrofishing and set about our surveys. Starting at Trabboch Burn just upstream of the road (Mauchline – Drongan) where Mr Mair from the farm informed me that there were no fish in the burn and hadn’t been since acid rain destroyed the fish population across Ayrshire many years ago! I was doubtful if we would find much, but for different reasons. Trout and salmon were absent but we did find plenty of stone loach and a single eel. Mr Mair was delighted to see that fish were present.

We headed to Quilkieston, about half a mile upstream of the new site that we fished last week. A a perched bridge apron at the top of the field may stop grayling moving further upstream but salmon and trout should  make it over in high water. A mature conifer plantation over-shades the burn upstream of the bridge and the stream is over wide and eroding as a result. 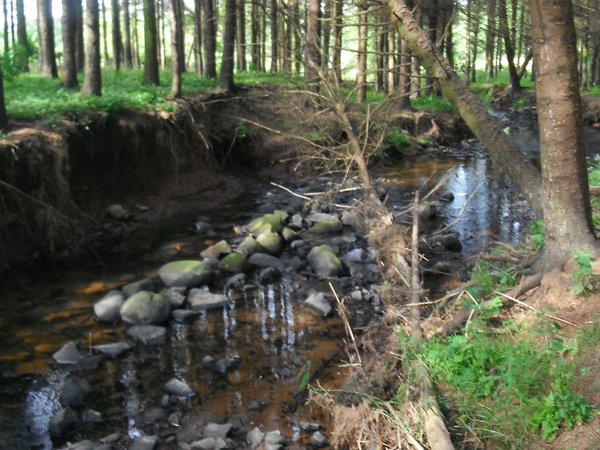 Erosion as a result of overshading. It was here we saw trout on the way to the site.

We headed for some good looking habitat outside of the wood when we saw a few trout scooting for cover under the conifers. We fished our chosen site but failed to find anything but loach and sticklebacks. On the way back to the van I couldn’t resist fishing in the wood and very quickly caught a 9″ trout. So now we have confirmed that they are there, we can start looking for ways to increase their numbers and widen their distribution. The habitat looked pretty good upstream with plenty of gravel for spawning and good instream and bankside cover on one bank. Freshwater shrimps were abundant and a good food supply for fish. I think fencing may be the answer here as cattle have unrestricted access and contribute to siltation and enrichment. 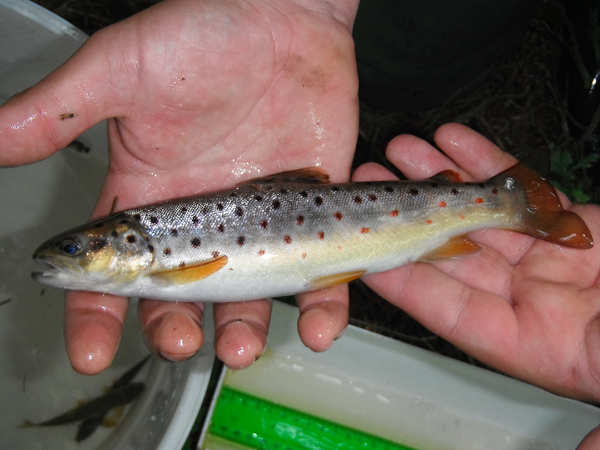 A rare wee beauty from the Glenstang

We then visited the Greenock Water to fish a couple of sites that we have there. We failed to see many salmon on the redds last winter in this area and were very concerned that this would lead to poor results this season. We must have missed the spawning as fry results were excellent and up on the 2011’s numbers  at one site at least. The other site upstream of the road had lower numbers of salmon fry but trout were improved. We caught a brook lamprey here which surprised me more than a wee bit. I think this is the furthest up the catchment we have encountered this species. 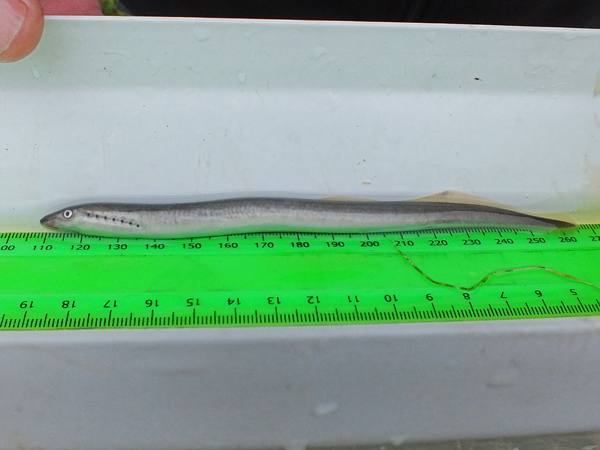 A brook lamprey caught from this site

Salmon fry were down on previous levels at the upper site. The upper Greenock Water is well below carrying capacity and this is undoubtedly an access issue. The culvert under the road is known to restrict fish passage (as supported by our graphs below) and I think we should look to East Ayrshire roads department for assistance with solving this problem (or reducing it at least). 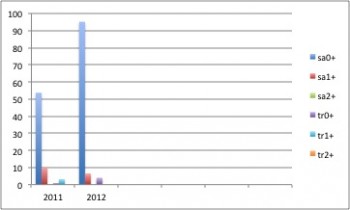 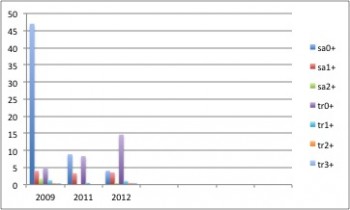 Overall I think the results from the Greenock Water illustrate that this tributary is consistently good but in places could be better. Despite main stem river Ayr results being poor, the Greenock continues to produce large numbers of salmon each year without which I think angling for salmon on the Ayr would be in dire straits.

I intend to look further upstream near the Head of Greenock Water and the Dippal Burn to see if any salmon managed to spawn there last season.