After a morning meeting, we headed out electrofishing to take advantage of another dry day. Just before we left Ayr I had a call from Sorn where it was bucketing down but we decided to go anyway. The rain must have passed quickly as the Bun O’ Need hadn’t risen much. Following last weeks visit when we came across massive gravel movements and relatively poor salmon numbers, we headed to an area a short distance downstream of the Sorn Road where I knew there were good gravel beds and I’ve regularly seen redds and salmon in winter. The flood in late June really has changed this burn drastically. Huge piles of substrates are now heaped up at every bend in the river. Gravel beds that once were uniform are now deeply scoured and the flow has changed dramatically in places. 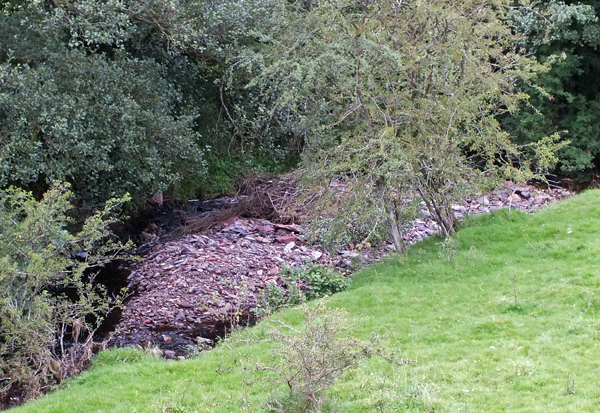 It is more than just gravel that has moved. Tonnes of sediment of all sizes has been deposited along the burn.

The site we headed to had change too. Undeterred we fished the chosen site. Results were good. Compared to the site just a short distance upstream, salmon numbers were very good . Fry worked out at 20.53 , with par at 3.52 per 100 sq m ( approx 20 fold increase). Trout numbers were about half of those recorded upstream. Between the two sites is a narrow waterfall that is passable, but it may have an influence on the amount of salmon that progress further upstream. 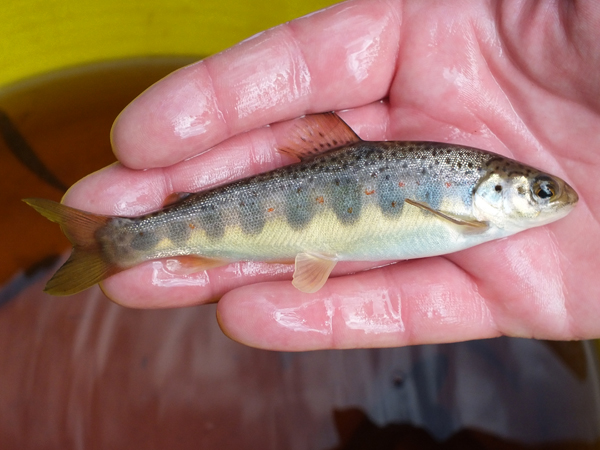 What a shape! If it returns as a MSW salmon and retains this profile, I want to catch it.

We left this site and went to Wealth of Waters at the Sorn/Galson road. Salmon fry were absent but we recorded parr at 1.33 per 100 sq m. This was poor but consistent with results from the next site downstream, that we surveyed last week. Trout on the other hand were encouraging at 37.23 fry per 100 sq m. Trout parr (1+ 5.32)  (2+  0.66) and (3+ 0.66) per 100 sq m. With such poor salmon results, I doubted whether any would make it further than this site as the bridge apron just upstream presented another obstacle. We decide to look at another new site at Weitshaw farm, another  1.5 miles upstream. 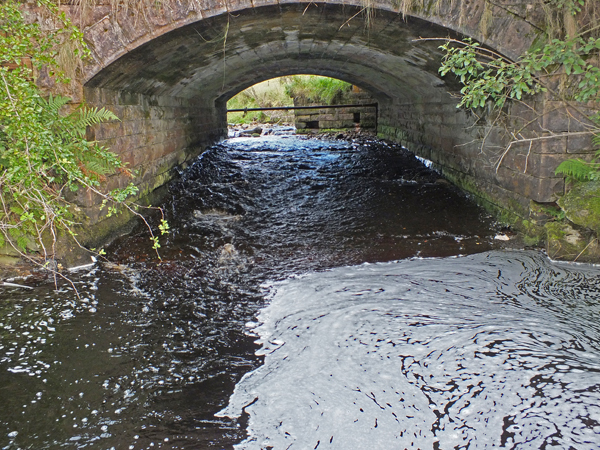 The bridge apron at Sorn/Galston road s about 75cm high. Passable, but only in certain flows. 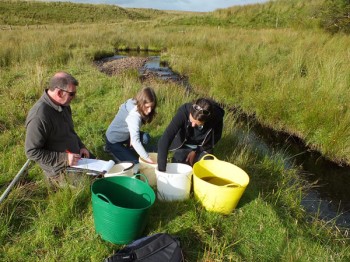 Sarah and Alba helping me to record the catch at Weitshaw

Weitshaw hadn’t been surveyed before. I was informed that the Bailiffs used to stock it but not in recent years. Trout were small but there were plenty of them (Tr 0+  17.16; 1+ 9.53;  2+ 1.91). They were noticably smaller than those downstream but that is to be expected. 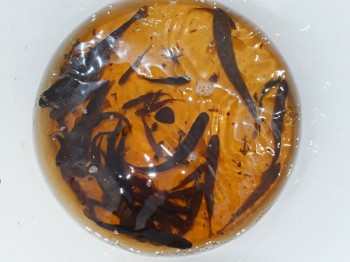 A surprisingly good catch from Weitshaw

Two eels and stoneloach were caught, but the surprise of the day was a single salmon parr. This solitary fish confirmed that salmon can and do spawn upstream of the Wealth of Waters road Bridge. This is really good news, however it does indicate that much of the burn is below carrying capacity for salmon. Perhaps the high flows last winter and the freezing conditions the year before has a lot to do with this. I’ll be keen to walk this burn during spawning in the coming months.