Cessnock Modifications lead to problems It’s a bite but by what?

After posting such a depressing blog as the previous entry about the Cessnock, I am delighted to report some good news. The Black Rock weirs that were completed earlier this summer appear to be doing the job that they were designed to do. I paid them a quick visit today and saw several trout attempting to leap the falls. There’s no surprise about this, as trout we know migrate upstream to find spawning gravels at this time of the year and Kilmarnock Water has plenty of them. 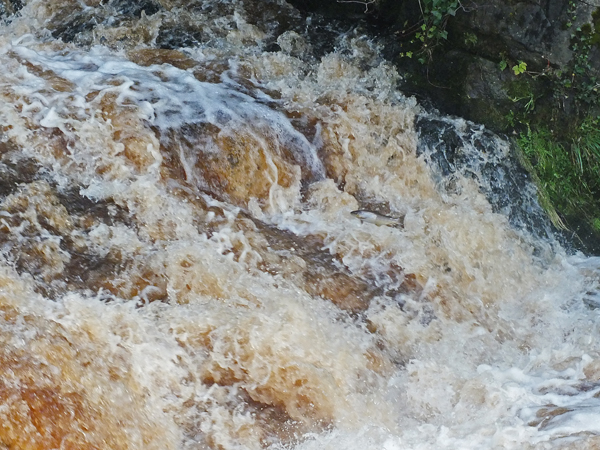 Not the best photo but I think this was a sea trout of about 1.5lbs

As I was fiddling with the camera, James who was with me, saw a ‘huge’ fish leap far up the falls. I asked what it looked like as I had missed it and he replied that it was shiny blueish and massive compared to the trout we had been watching. James isn’t a fisher but I do believe he had just seen his first fresh run salmon. We continued to watch for about half an hour and didn’t see any more salmon so I presume it had made it over. I did see a few sea trout attempting the leap and managed to capture one in the picture above. I saw another fish of about 3 lbs that I expect was a sea trout too but didn’t manage a shot of it. I’ll keep my eye on this from now to the end of the season and will do my best to capture a salmon in mid air.

One Response to Black Rocks success!