Last week we managed to electrofish some sites in the Duisk catchment (a tributary of the Stinchar). Despite water levels being higher than we would like, we had to make the most of the dry days.

I’ve included 6 charts below. Classification follows SFCC guidelines and is comparable across Scotland. 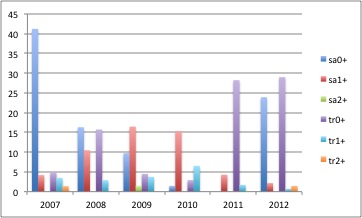 Our upper site on the Muck Water. Both Salmon and trout fry are in the 'Good' category. 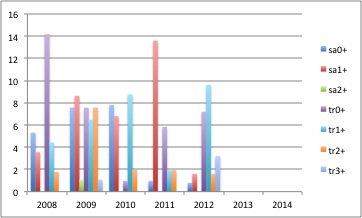 The Cross Water at Barrhill. Salmon fry and parr both 'Very Poor' but Trout fry were 'Moderate' with parr 'Excellent'. 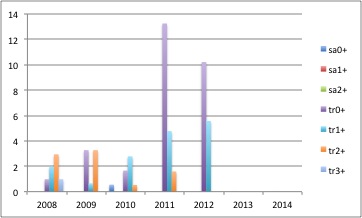 The Water of Tig. We have only ever recorded a single salmon in 2010. Trout fry were 'Moderate' but parr were 'Good'. 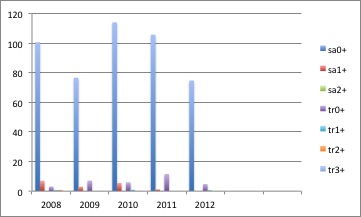 High Altercannoch on the Duisk. An important site for salmon fry production with 'Excellent' results despite being down on last year. Trout were 'Poor' but that's not unusual where salmon compete for space and food. 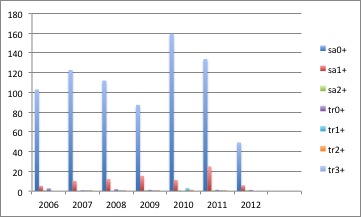 Ballochmorrie House near Barrhill, again salmon fry were in the 'Excellent' category and again trout were poor.

Both High Altercannoch and Ballochmorrie are main stem sites and highly productive. Results are consistently amongst the best we find anywhere in Ayrshire. 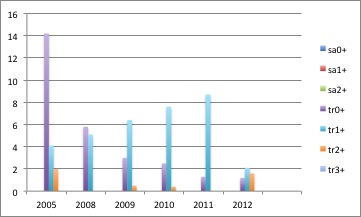 Knockycoid is inaccessible to salmon as far as we know as we have never caught one in any survey. What is interesting over the 7 years is the decline in the trout fry population (‘Very Poor’ in 2012) and the increase in parr . 2012 is an exception to the developing trend but encouragingly, 2+ trout were slightly up (Moderate) We will have to wait until next year to see how this develops.