Brood-stock collecting… or not! Spawning is underway.

Apart from being a blatant breach of CAR regulations, spreading slurry in frosty conditions does cause problems to the water environment. Farmers have struggled with wet conditions all summer and no doubt many have been unable to spread their slurry and empty their storage tanks before heading into winter. Hard frost as we’ve experienced for the last week is traditionally when farmers got rid of slurry by spreading it on the land but this is no longer acceptable and hasn’t been for years. Slurry, when applied as a fertiliser is valuable; too valuable to dump as waste on fields at this time of year when nothing is growing. There is no purpose to spreading at this time of year other than to dispose of liquid waste and if that’s the aim, then it should go to landfill and the associated cost paid by the farmer.

Last week, I saw several farmers spreading slurry in 3 different catchments. Rain was forecast for Friday evening and it came. On Saturday morning I received a call informing me that the Yonderton Burn was dirty. On inspection it was obvious that slurry was responsible. The water was green. I followed it upstream and could pinpoint the source to a very small area. At worst three farms were responsible but most likely it was due to the actions of a single farmer. The incident was duly reported to SEPA for them to investigate. 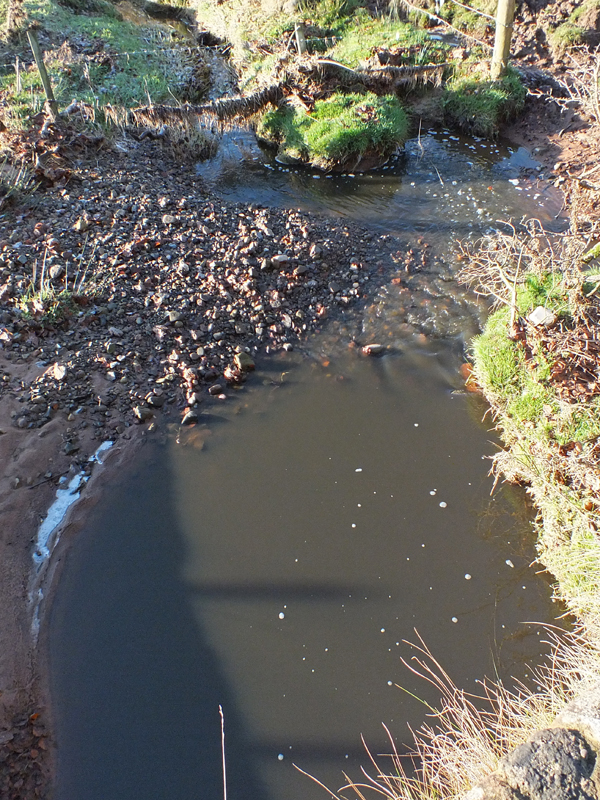 Unacceptable pollution from slurry spreading! What will be the outcome?

Now this isn’t the first time we have seen burns in this condition but SEPA have been running a diffuse pollution initiative for the last few years in an attempt to reduce this type of incident. When trout and salmon are spawning at the moment, it doesn’t bode well for egg survival downstream of the source of these event. Is it any wonder that we are noticing fewer and fewer trout and salmon in the Ayr catchment when this type of activity continues? Other rivers such as the Doon, Irvine  and Girvan also suffer from agricultural inputs.

I’m not suggesting that agriculture is wholly responsible for the stock declines on the Ayr, its not, but its not insignificant either, especially in the burns and lower catchment where the cumulative impact is greatest.

Anyone finding similar incidents in the coming weeks and months, please report it immediately to SEPA and the Trust. When calling SEPA, always ask for a incident reference number to ensure that it has been recorded. SEPA’s 24 hour number is 01292 294000. If the local office is shut the call is diverted to East Kilbride and actioned from there. The Trust number is 01292 525142 or use my mobile number if out of office hours (this is available from the office so add it to your contact list now before you need it).