As promised we headed back to finish lifting our egg boxes on the Ayr catchment today.

We started with the Whitehaugh Burn that we also thought may produce good results but I fear we picked a site too low down this burn. The fields either side of the site were obviously heavily grazed over winter and slurry has been spread in the last few weeks. Never the less we opened the box expecting reasonably good results. 30 eggs had survived. Much fewer than I had hoped for but better than at most other main stem sites. 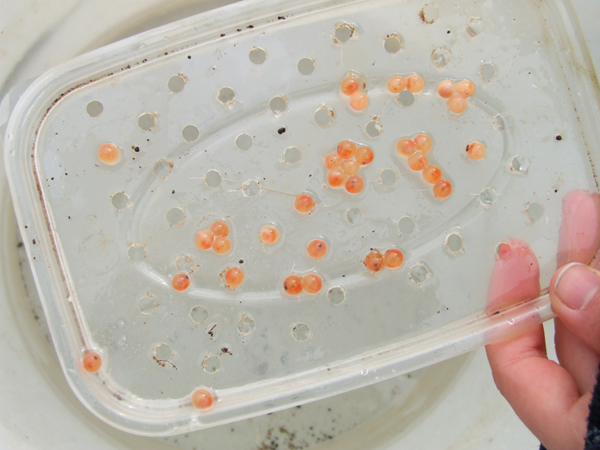 Eggs from the Whitehaugh. Not all of these were classed as viable

We then recovered a fork that we had left on the riverbank yesterday and then went  looking for two boxes that we couldn’t find but this time armed with photos to show the exact locations. Still no luck. We had looked at the right spots yesterday after all but the boxes were gone. I suppose this is one of those things that happens that you have no control over but it was a shame that one of these sites was the control for the Lugar system and the other was just downstream of an input that we are concerned about. There are lessons to be learned from this experiment.

The Avisyard Burn has given us cause for concern in recent years and frequently we recprd some incredibly high conductivity levels in the burn. The burn was dry for several years when the land upstream was opencasted. Eventually the burn was reconnected and is now supplied with a constant stream of water from a large deep pond high up on the hill. The high conductivity levels are simply a measure of nutrients/minerals or heavy metals held in solution. The water clarity is great but there are deposits building up on the stream bed as the minerals precipitate out. We have analysed the water chemistry too and that will be looked at along with the results from this trial. We had an egg box buried in the gravel low down on the Aviyard and when opened, to our surprise, eggs had not only survived but hatched. 4 eggs and 21 alevins were recorded with a further 4 alevins dead and decomposing. The temperature of this burn was several degrees warmer than the main river which explains the early hatching. So egg survival is possible here but we don’t know why the alevins had died. This needs more research.

The next burn sampled were near Dumfries house and flow from Skares direction. We sampled the Back Burn/ also known as the Ward Burn and the Polcalk Burn. The Back Burn suffers from periodic discolouration arising from surface mining and in fact has lost most of it’s flow at the moment due to the disturbance upstream and lack of rainfall. Conductivity levels were high as usual. The number of eggs that survived was poor at 15 but I noticed little decomposition amongst many of the dead eggs and I think this suggests they are fairly recent casualties. I suspect that this may be due to the low flow and the silt in the box reducing the available oxygen for the eggs. The burn was heavily impacted with algae. 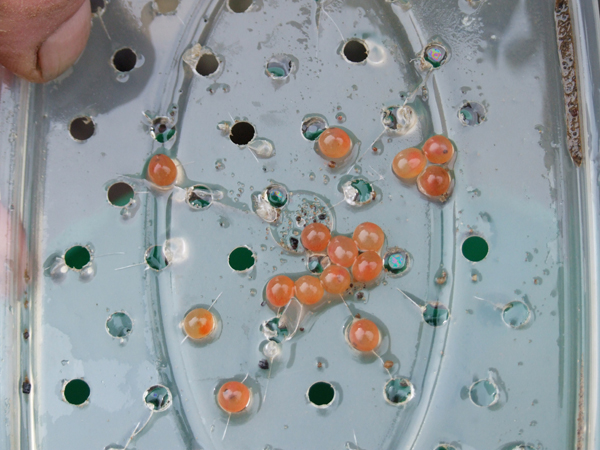 Only 15 eggs survived in the Back Burn

The Polcaulk Burn receives water from the opencast and I believe some from Garlaff landfill. Conductivity is always very high but at the sampling point in Dumfries House Estate, water quality appeared remarkably good and invertebrates were abundant. The box had filled with sediment but when opened it contained 58 viable eggs. 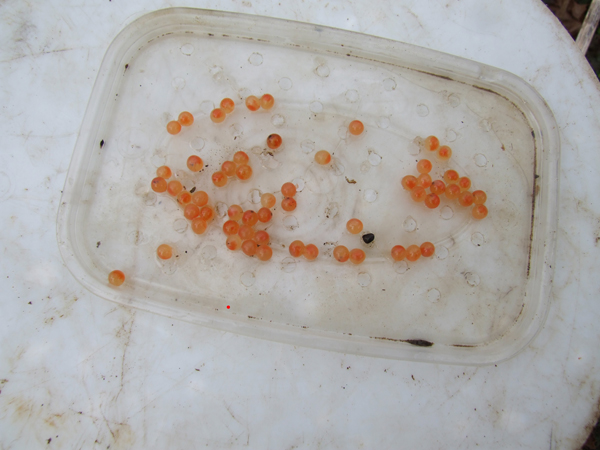 A good result from the Polcaulk

We had one more tributary site down stream where the Polcaulk and Backburn meet before entering the Lugar. The result was poor but marginally better than the Back Burn result upstream (substantially poorer than the Polcaulk on it’s own). Only 19 eggs survived.

Finally we had two sites on the Lugar, one upstream and the other downstream of the confluence with the Ward/Polcaulk confluence. Unfortunately, the upper egg box was missing and the downstream box had washed out. Sadly we have no results for these sites or the two mainstem sites on the Glenmuir. I presume that huge spates since placing the boxes is responsible. 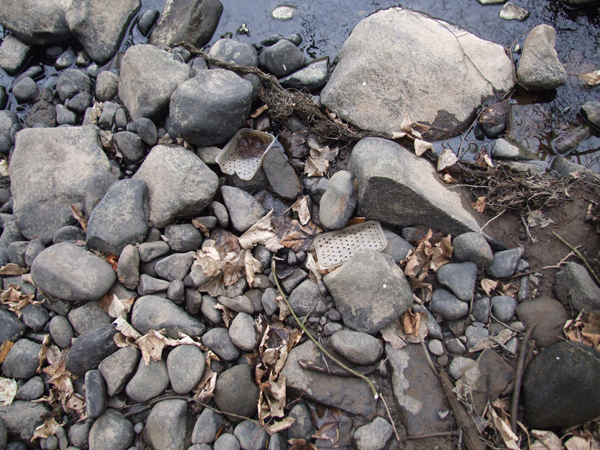 The Lugar system hasn’t been kind to us and we lost all 4 main stem boxes.

What does all this mean? Well it needs looked at in detail but I suspect that we need much more work on this subject. We are encouraged that eggs survived at all locations but the Stottencleugh but at low numbers on the whole. It will be interesting tpo compare these results with those we get from the Doon shortly.

I will prepare a full report and publish it on our web site in due course for those interested.