The egg trials on the Doon were concluded today when we lifted and examined the boxes that had been in the river since January. We decided to run this trial to answer questions raised about the lack of fish spawning in certain areas and also to see what impact diffuse pollution was having in key areas.

The eggs we planted were strippped by Tam McClure during December and stocked out on the 21st January. Although not hard, we took great care to protect them from damage when handling and in transport.

The control site chosen was the Mossdale Burn high in the catchment above Dalmellington. This site doesn’t suffer from industrial inputs and has limited agriculture to influence water quality. It may though suffer from the effects of forestry which is common in the Doon upper catchment. We lifted this box this moning expecting good results and weren’t disappointed. 81 eggs survived and all looked very healthy. 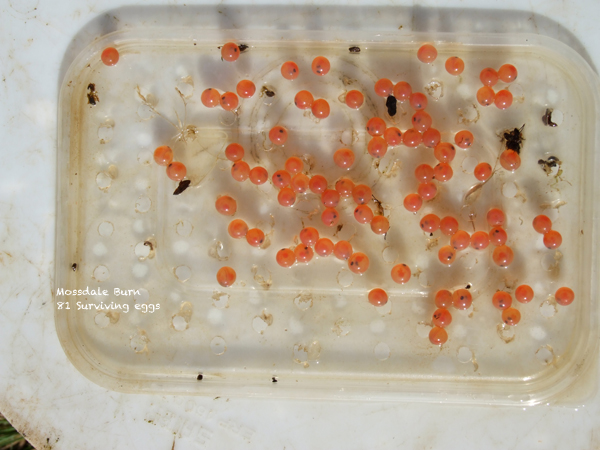 A good result from the Mossdale Burn

We then visited the Cummock Burn where again we found reasonably good numbers of eggs had hatched or survived.As  we lifted the box I noticed a couple of alevins drop through the holes in box and there may have been more  escaped as it was extracted or beforehand. In any case, we counted the dead eggs to be sure. 60 eggs were dead and 20 alevin seen in the box leaving 20 missing. I would presume that the missing 20 had hatched and escaped the box although I can’t be certain. The dead eggs were all clumped in one corner of the box and fungus had affected them. Sadly when fungus takes hold, any eggs touching fungus are likely to be lost. I think this result would have been much better in a natural redd but of course we have no way to be certain. Another interesting finding at this site was the large number of cased caddis in the egg box. I transferred a few to the bucket along with the alevin and within a moment or two, we noticed that two had attached themselves to the same alevin which they proceeded to eat alive. I wonder how many alevin succumb to predation by invertebrates? 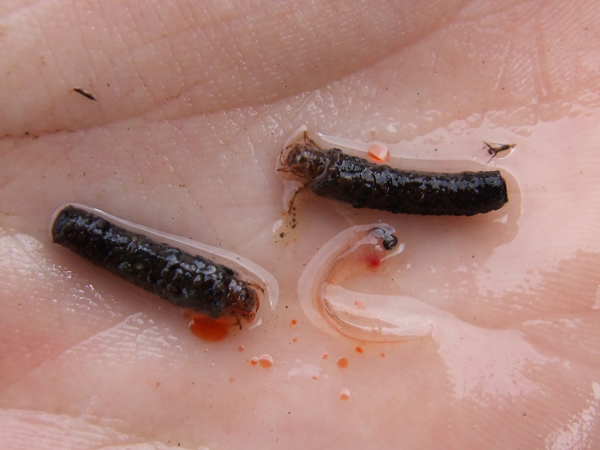 An unfortunate alevin that was eaten by the cased caddis in the picture. The egg sack had been removed at this point.

The egg boxes at the Sillyhole and the lower Muck sites had disappeared which was unfortunate. We lost 4 on the Lugar system and two here on the Doon, all but one in places where the public access regularly and I can’t help but think that the marker strings have attracted unwanted attention. This needs a rethink for future trials.

Further downstream, the Dunsakin Burn results were reasonable with 32 surviving eggs or alevin. This box was partially exposed and most of the dead eggs were  obvious before it was removed from the gravel and I expect had it not become exposed, we may have had a better result here too. We then looked at a Smithston Burn. The lower stretch of the burn may be accessible to salmon and migrating trout but upstream of the railway line is inaccessible but I thought we would look at it anyway. It suffers from high conductivity which indicates that pollution is getting to it but from where, I’m not sure at present.  Water clarity was excellent and there didn’t appear to be much silt on the bed. Disappointingly, the result was far worse than I expected and only one egg remained viable. Another had hatched but the alevin had died. The stream bed was covered with algae indicating enrichment. We moved on quickly to Boreland Burn. This burn is accessible and should be an important spawning area downstream of the culvert on the Dalmellington road but it too suffers from enrichment from agriculture. The results were poor with just 13 eggs surviving. 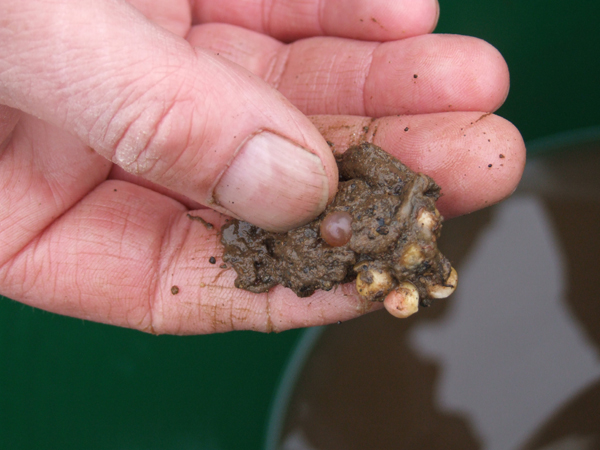 Very badly silted and obviously enriched, it wasn’t surprising that only 13 eggs survived.

Another Burn that concerns me is the Netherton Burn where we had another egg box. This burn used to have a few salmon returning to spawn and we will be looking closely at it again this summer but I knew that there had been historical pollution on the burn so I felt it was worth including in this trial. At the time of planting, Gordon and I were rather shocked at the livestock poaching and issues we encountered and I recently  asked SEPA to have a look at it again. Last week I spoke with the officer who had attended following my report. He informed me that there was nothing to cause concern and the burn appeared to be in reasonably good condition. I was pleased to hear that so when we arrived today, I can only say that we were shocked by what we saw. Judge for yourselves but in my book this isn’t what we need or expect from our burns if there are to be fish in them. 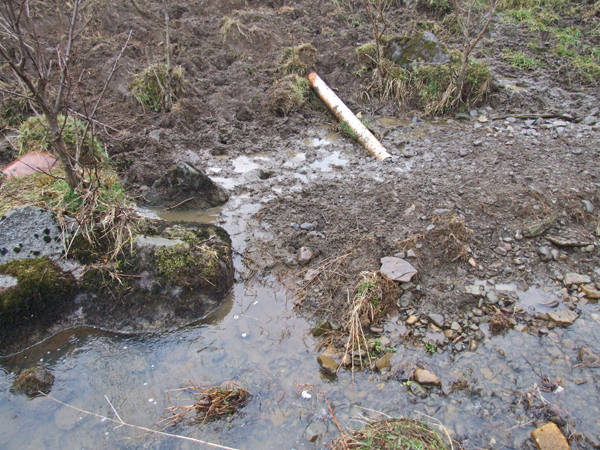 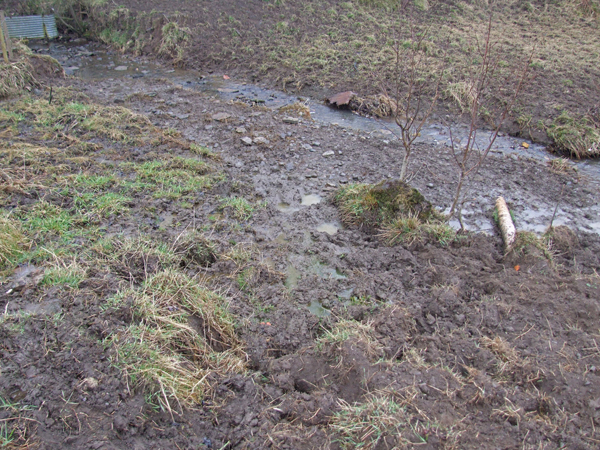 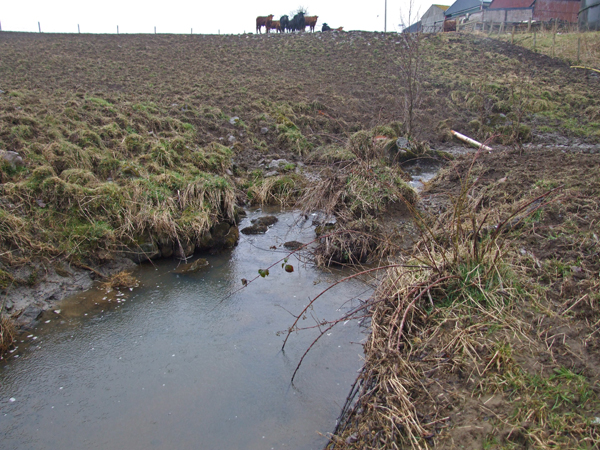 This field was unfenced with cattle accessing the burn and severe poaching noticeable throughout.

When we lifted this box, I was surprised to find 18 eggs surviving in the silted box. I can only presume water quality entering from upstream is good. I’ll look into this more thoroughly in future. I spoke to the farmer and he informed me that cattle were only present in winter. I informed him that eggs were only in the gravel in winter. I suggested that the DSFB may assist with funding for fencing and I arranged to return at a convenient time to discuss the options. Fingers crossed we will manage to improve this situation by next winter.

We had one box on the Chapelton Burn which we know has suffered from enrichment and siltation for some time. Not unexpectedly this box had no survivors. Another box remains on the Purclewan Burn that I’ll lift this weekend if I can.

Finally the Culroy Burn had 3 boxes on it. I’m keen to work out why this main tributary is not producing many fish these days. It’s reputation was as a sea trout burn years ago and there has been considerable attempts to restock it although I think many salmon were stocked too. Recently the numbers of juveniles captured in electrofishing surveys has declined and I’m rather confused why this should be. Water quality appears good although there are areas where erosion may be causing enrichment but on the whole there doesn’t appear to be anything too serious. At Minnishant, our egg box had only one survivor. It was silted but nothing that I would have expected to have caused such a devastating loss.  Another box at Culroy immediately downstream of the road bridge produced the same result. I am confused by this as water quality appears to be good and the invertebrates present seem to support this. The habitat was good and ideally suitable for salmonids yet we have noticed in electrofishing that numbers are very poor here too. 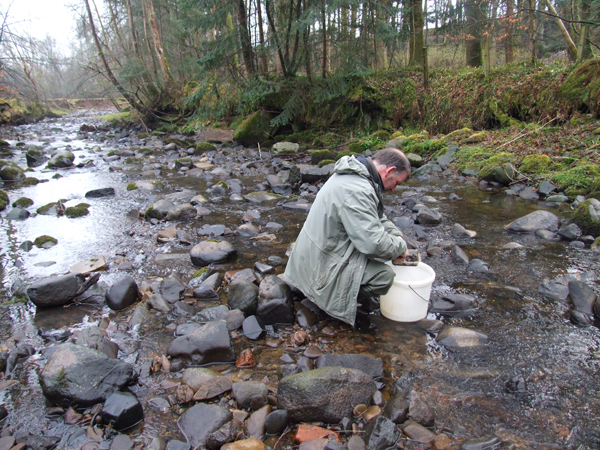 Inspecting the box in what should be an excellent habitat for salmonid recruitment.

Our last box was near Sauchrie downstream of where the Garryhorn Burn joins the Culroy Burn. Had I had more eggs at the time we planted them out I would have liked to try a box upstream of the confluence and on the Garryhorn Burn too. Water quality should be excellent here as the burns are fed from the Carrick Hills. The results were once again very disappointing and only 10 eggs survived. Siltation wasn’t the issue which leaves me with no credible explanation. This clearly needs more research as something is far wrong when only 12 eggs out of 300 survived in this river.

I’ll produce a full report on this trial and discuss the results and the implications with the DSFB and colleagues. It is clear that more research is required but we have some very clear indications where we should focus our efforts to bring greatest improvemets. The Culroy and Chapelton burns should both produce large numbers of sea trout and possibly salmon too. Salmon continue to visit both burns in very low numbers but this I fear will cease unless the problems can be identified and solved. Trout are present but in low numbers. The Chapelton Burn problems are rather more obvious that those of the Culroy but both should be tackled by SEPA’s diffuse Pollution initiative for Priority Catchments. We must see improvements as a result of this work or what chance have we of ever restoring our rivers to their former glory?