Scorching hot weather only means one thing… we are out of the office!

I took Helen to the Fenwick Water today to assess the impact of the pollution incident a couple of months ago. We fished two sites, one upstream of the pollution source and the other at the pool where we found a lot of dead fish. It seems that the fry survived ok as they were still in the gravel at the time of the pollution but older year classes were missing from the lower sample. We found a salmon parr  and three year classes of trout at the upper site although in low numbers. The solitary salmon parr we found was probably one that we had stocked during the fish rescue in the town centre in March and what a cracker it was too at 184mm long. 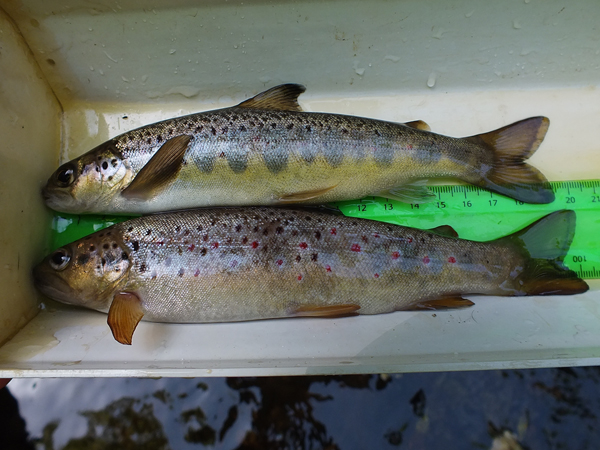 A huge salmon parr and a trout of 3 years old (to be confirmed).

The Fenwick Water is a lovely wee river and I hope to be able to report of good numbers of salmon fry in a year or two since access has been improved at Black Rocks. The final obstacle that needs improved is the Dean Ford and I believe there may be good news about this in the not too distant future. 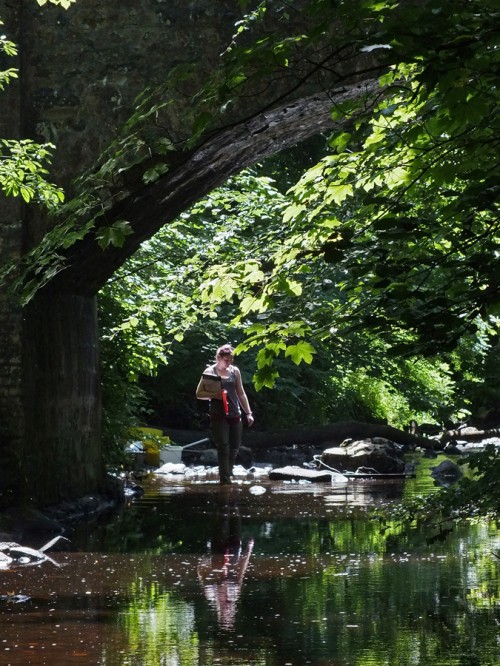 We then headed to Black Rocks Waterfall to collect kick samples for a client and to assess the gravel build up between the weirs. Whilst there has been a few tonnes of gravel deposited near the right bank in both weir pools, the pool below also has large deposits and I’m pretty sure that these were as a result of a particularly large spate last year and shouldn’t increase too much. I had a look to see where the large boulder we place upstream of the upper weir had ended up but couldn’t find it. This rock weighed in at over a tonne in weight so no one has moved it but I couldn’t find it. If it is still within the weir pool it must be buried in the gravel near the side. It certainly wasn’t where we had placed it in the centre of the pool which just illustrates the power of the water that come down this river during flash floods. 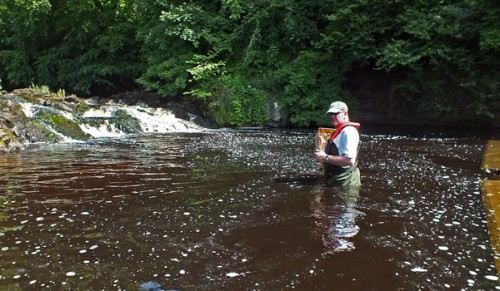 Looking for a missing rock!

Further downstream MBV were completing removal of the temporary road and I was shocked to see that there was no silt protection in place. The river downstream was filthy so I asked them to stop working until a silt barrier was in place. Apart from this mistake, I have to say that MBV have done a great job and I’m looking forward to seeing the benefits in years to come. There is a bit of regrowth of the Japanese Knotweed along the banks but we will again tackle this this year.