As the weather has remained dry, Stuart has been out electrofishing with a team comprising mainly of Helen and Struan. At the beginning of each annual electrofishing season we start with the timed sites, as contrary to popular belief salmon do spawn in the main stem of the rivers and not just their tributaries. Given the importance of the main stem for salmon production we established a system of timed electrofishing sites in 2003/4. The monitoring technique involves a team of three electrofishing in an upstream direction in run/riffle habitat for five minutes, using a banner net to capture the fish. These surveys are always carried out in low water conditions (where possible) during July and beginning of August.

Over the years some of the sites have been dropped and new ones established due to unsuitable habitat or difficult surveying conditions. Rivers substrates are never completely stable and high spate conditions can move large deposits of gravel creating new spawning areas, but in the same instance destroy original spawning grounds.

The results from the four monitored rivers over the time series are shown below. The sites in each table are ordered in an upstream direction; the first site in each table is the one nearest the sea. The mean (average) number for each year is shown in the bottom row. 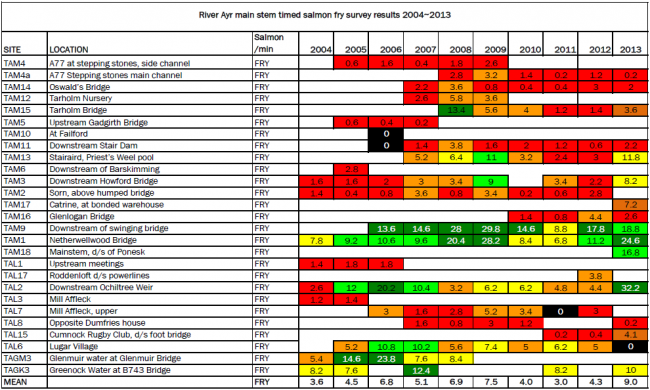 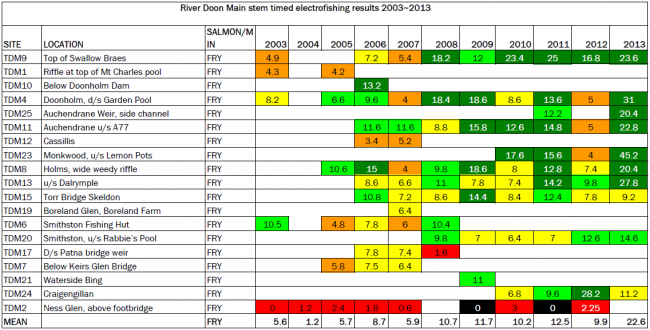 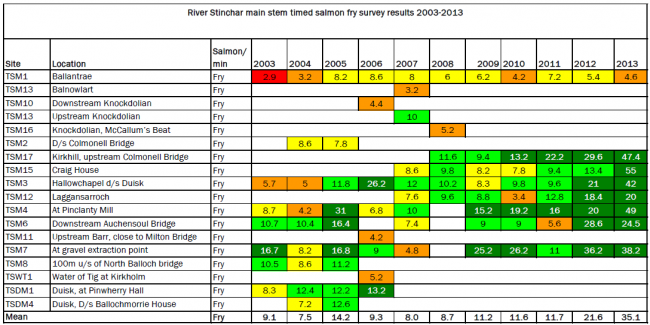 It should be clear from the tables above that the abundance of salmon fry in the River Ayr is quite different to the other three rivers. Overall for 2013 the River Ayr salmon fry main stem average is in the moderate category, whereas the Doon, Girvan and Stinchar are all in the excellent category. However this is the best result we have had on the Ayr since the timed surveys began in 2004, but heavily relies on the upper catchment to produce good numbers as the lower catchment continues to be poor.

4 Responses to Annual timed electrofishing results on the Ayr, Doon, Girvan and Stinchar