Once again the journey to Markhill was interrupted by roadworks. We were already delayed setting off this morning as I had to get yesterdays puncture fixed first and it was after 9.30am before we left Ayr. Our route around the roadworks was blocked so rather than face a very long diversion and lose more of the day, we settled for a day surveying the Assel. This important Tributary of the Stinchar hasn’t been as productive lately and I’d informed the Sinchar DSFB that I’d like to look at it in more depth this year. The Bailiffs were struggling to find spawning salmon on the redds at the backend of the year so I was slightly concerned that we may find poor fry numbers.

Meryl and I surveyed the lower reaches in winter looking for problems and on the back of this, today we went fishing. Starting at Asselfoot, a short distance from the junction with the Stinchar, we found 268 salmon fry and 15 parr, but only 1 trout fry. All this from a site of not more than 120 square metres giving a population density of approximately 2.4 salmon and trout per square metre. Habitat quality at this site was excellent. 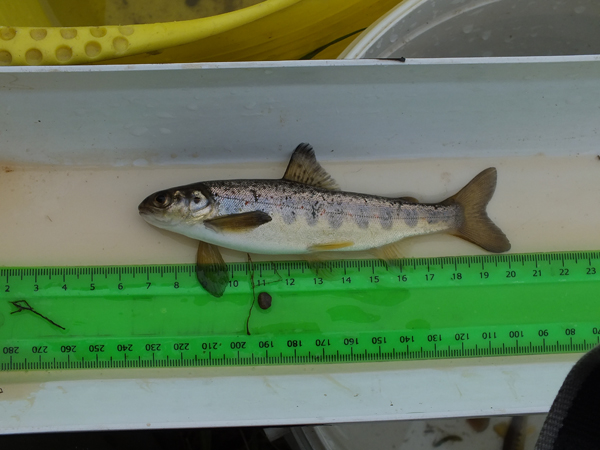 A lovely wee salmon from the lower site on the Assel

We headed next to Machlachrieston Farm Bridge where we fished an area downstream of the old ford (now redundant thanks to a new heavy duty bridge). This site was approximately 62 square metres and we caught a total of 109 salmon fry and one parr, giving a density of  approximately 1.76 salmon per square metre but then we have to add the trout! Trout fry, parr and adults totalled 17 and 0.27 per s qm. A total fish density of 2.03 per sq m. The habitat at this site was poor, offering little fish cover and the bed was heavily silted yet the result was good.

Further upstream behind Pottery Cottage, there is a badly eroding bank that must add to the silt load in the burn. We fished a short distance below this over an area of 87.3 sq m. Salmon fry numbers totalled 167 and we found 8 parr and a total of 27 trout giving a fish density of 2.31 per sq m. The habitat at this site although silted provided good fish cover. 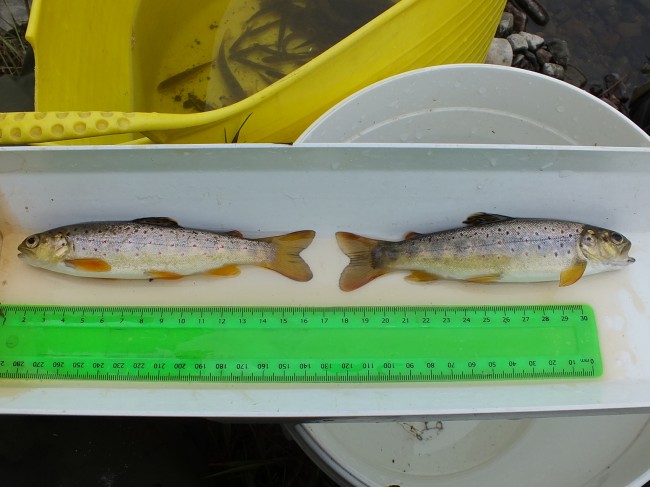 Two trout only 2mm different in length but look at the difference in their condition/shape. The fish on the right was doing rather better than the other

So far these are very consistent results but as we progressed upstream, trout numbers increased and salmon decreased slightly. We progressed to Daldowie and our regular monitoring site where we fished 63.2 sq m. Total numbers of trout once again increased to 43 and salmon decreased to 113. The total fish density was 2.47 fish per sq m. Habitat at the site was good although just upstream was silted.

Finally today as we were rapidly running out of time, we opted to fish a very short stretch a mile or so upstream but below Tormitchel quarry. We fished just below a ford. Habitat was again good but there was a lot of algae in the shallows that made catching fry especially difficult. Silt was present too. The area fished was about 25 sq m. Not really big enough, but I did feel it allowed us to catch a representative sample from that area. 40 salmon fry and 2 parr were netted along with a total of 13 trout. This works out to a fish density of 2.12 fish per sq m. Once again, a result consistent with other sites. At this site we noticed footprints that looked very like those of Water vole’s but we didn’t have time left to investigate beyond the immediate area. Sadly no more signs, but Helen came across a newt next to the burn. 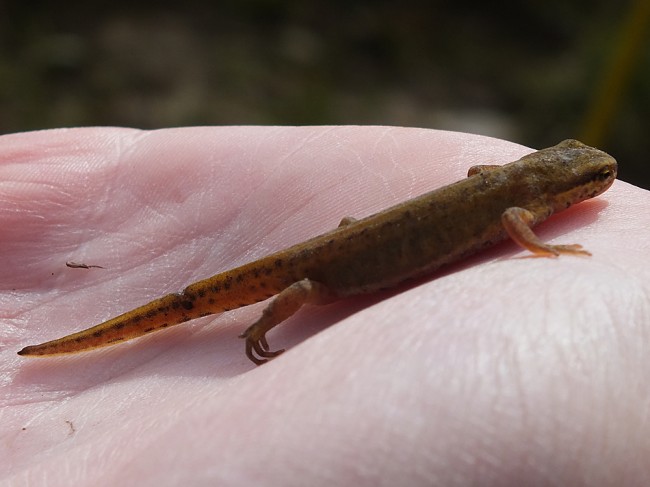 A newt from the upper Assel

Once Gillian has entered these results in the database, we will be able to compare these results with other areas of the Stinchar catchment and other rivers Nationally but I’m guessing these will be good results anywhere. Just imagine if the silt problem could be addressed effectively. It is clear that the burn is important for salmon and trout and I remember watching a large sea trout in the middle reaches a few years ago, in high summer.

On todays results, we caught a ratio of 60 salmon : 1 trout, and 35.2 salmon fry : 1 parr. The total number of salmon caught was 823 from a total area of 357.5 sq m. The average density of fish  in the areas visited was 2.30 per sq m. Without looking at the old habitat report (I don’t have it at home with me as I write this), I’d estimate that at least 6.5 km of burn is accessible (I’ll know exactly tomorrow). The average wet width from todays sites was 4.147m. We looked predominantly at fry habitat and that doesn’t include pools. We looked in many pools but didn’t attempt to fish them, but they all contained good numbers of trout and/or salmon parr. It would be a very interesting study to attempt to quantify the carrying capacity of the burn but it would take a lot of time; much more than is available to us at the moment, however with results as consistent as we found today, we may be able to quickly come up with an estimate based on previous habitat data. It would be very useful to have an idea of how many hen salmon are required to populate this burn to current levels. Recent research by the Lomond Fisheries Trust may be able to give us a model to assist with this. Perhaps we could find an SRUC under graduate in need of a dissertation project. Any takers out there?

We intend to look at the burn again tomorrow near Tormitchel. The Barbae Burn joins the Assel here and we will have a quick look upstream of the confluence on both sides.