We continued electrofishing on the Assel today. I had only ever fished at Daldowie before so the last couple of days have been an education and very interesting and we now know a fair bit more detail of the Assel’s fish populations and the habitat and diffuse pollution issues that affect the burn.

We started the day at the Barbae confluence where we decided to fish just above the confluence on the Assel itself. We fished 40.87 sq m and caught a total of 71 salmon and 18 trout. The total number of fish per sq m was 2.17 , consistent with yesterday’s results. There was a deep pool with rock armour along one bank just downstream and I couldn’t resist a quick fish near the rocks. This is often a good spot for better than average trout and I wasn’t disappointed. In seconds, I scooped 8 nice brownies into the net. I anaesthetised them and took scale samples from a few and photos, before releasing them unharmed. 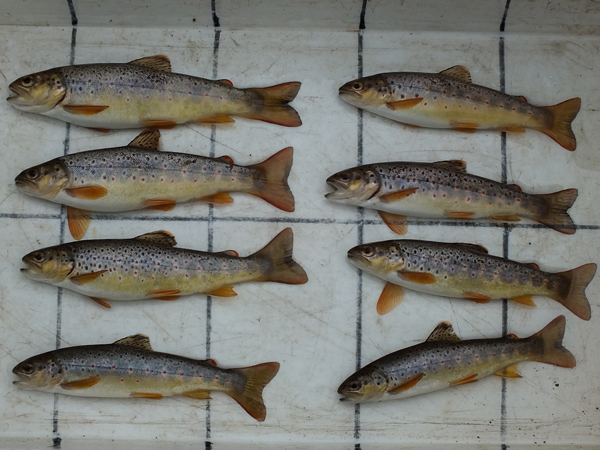 We headed upstream noticing that the algae and silt was increasing slightly. There were plenty of fry and parr moving in front of us as we walked up the burn eventually stopping at some grey sediment that had obviously come from the quarry. Whilst this doesn’t appear to be a huge issue, we have had reports in the past of grey water and I suspect it wouldn’t take much of this fine silt entering the burn to colour it grey. The sediment is so fine  that it will remain suspended for some time. It appears to come from a quarry road adjacent to the burn. We decided to fish at this location to see what was there. This site was slightly down on other Assel sites that we have surveyed but only slightly, with a total 28 salmon and 87 trout caught. The total number of fish per sq m was 1.99 (the first site below 2 per sq m). We carried on upstream past a man made waterfall that looked as though it may present a barrier to some fish migrating late in the year. I can’t really see the purpose of this feature that has obviously been installed by the quarry some years ago. I may speak to them and ask if they could remove the scrap and tyres that are in the water as this would make it more fish and environmentally friendly, perhaps improving access too. 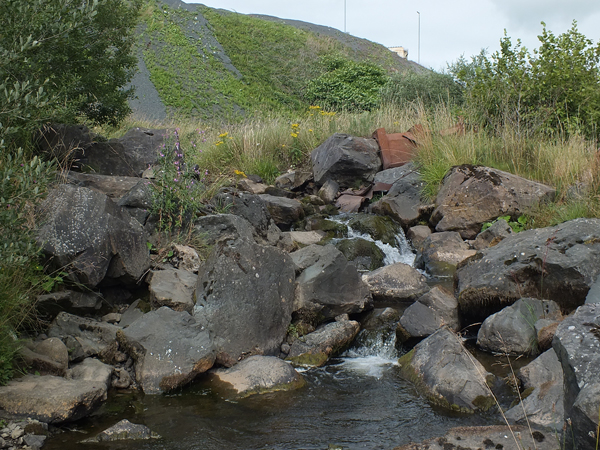 Whilst passable, it could be improved if the scrap metal and tyres were removed.

Upstream we fished another small site where erosion was obvious which was adjacent to the quarry. Here we  almost caught as many salmon as trout (41 Sa: 43 Tr) It wasn’t a large area that was fished and after calculating the results, they work out to 2.65 fish per sq m, the best result so far. Grazing was limited at this site and there was a high percentage of bankside vegetation  draping the water and offering cover. Further upstream on the way to the final site we came across another obstacle; a culvert made from an old industrial boiler. The culvert was only slightly perched and the pool downstream was deep so I doubt that any migrating fish will find it much of a barrier. Inside the boiler we found a dippers nest. 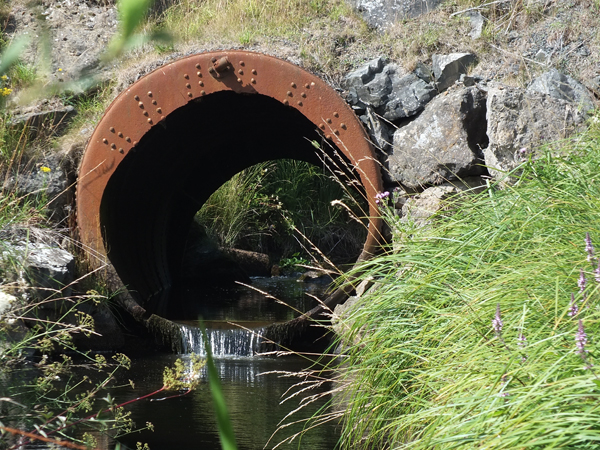 An old boiler formed the culvert. We found a dipper’s and swallow’s nest inside.

Our final site was upstream of the quarry in a field where once again erosion was obvious. Cattle and sheep have access to the burn and this leads to overgrazing resulting in erosion and contributing to enrichment. The burn would certainly benefit from tree planting and fencing in this area. Although this area has been fished on 5 previous occasions, we may not have selected the exact location as none of us had been here before but we weren’t far off. I’m sure the results were representative of the population in the area.  I checked the database this evening to compare the results and found they had fluctuated widely over the 10 years that it has been surveyed but so too had the habitat features recorded so I suspect the site fished hasn’t always been exactly the same location. This years results were the best on record with 17 salmon fry and 3 parr recorded along with 56 trout. The total number of fish per sq m. was 2.02 per sq m. 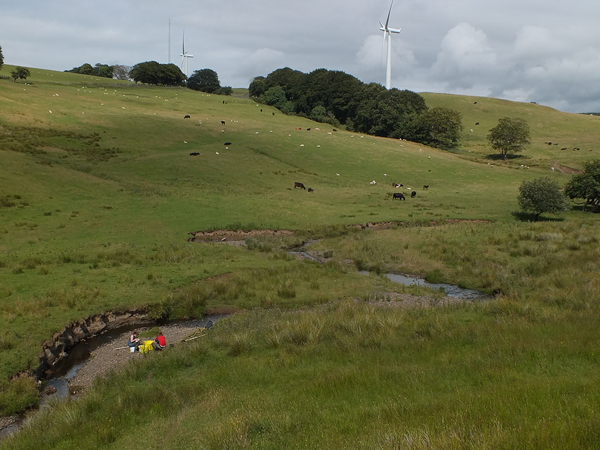 Recording the catch below the Hadyard Hill turbines.

The results on the burn have been very consistent with the total number of fish per square metre exceeding 2/sq m at all but one site  (1.99). The ratio of salmon to trout has fluctuated widely as the habitat changed and we progressed further upstream but I was very pleased to see so many fry of both trout and salmon featuring at the upper sites. Despite concerns that few salmon were spawning in the Assel last winter, I’m confident this wasn’t the case. Timing is everything and I guess the bailiffs missed them ( easy done in high water). Trout numbers aren’t normally as good where salmon are present but the Assel results may indicate that sea trout are spawning here in numbers.

I would really like to monitor smolt production at the foot of the burn next spring to assess the output of both salmon and trout but I’m not sure how we could do this as it is very labour intensive and not exactly within easy reach of the office. I fully intend to walk the length of the burn at spawning time and perform a redd count.

The erosion provides both benefits and problems. The gravels and coarse sediments that are necessary for spawning are produced by this action but so too is the silt that causes problems. Clearly there isn’t an issue with lack of fish and consequently I feel that asking farmers to exclude livestock may be difficult to justify and won’t deliver any significant improvements however in some areas, tree planting  (with associated fencing) may help stabilise  eroding banks but this would be a longterm strategy. The added benefit of tree planting is that it helps to shade areas keeping water temperatures down and adds leaf litter  that is good for invertebrates. Other improvements could come from increasing the instream cover for fish in the form of boulders. Some sites lacked larger structures that  fish love. We may attempt to secure funding for these types of improvements but it will rely on landowners supporting the action.