This week we have been busy electrofishing on the Duisk and Stinchar catchments. I haven’t posted any photos as I lost my camera on Monday, but thankfully when we started backtracking in search of it, Struan found it lying behind a wall at the Feoch Burn. It must have fallen from the backpack as we crossed the wall.  Anyway, it was still working and I’m relieved.  Helen and I were searching for the camera in rough ground when she got very excited and I thought she’d found it but no, she had found an adder instead. This was great to see but I was disappointed I didn’t have my camera to hand. Helen pulled her mobile from her pocket and managed to take one snap  before it disappeared into the undergrowth. 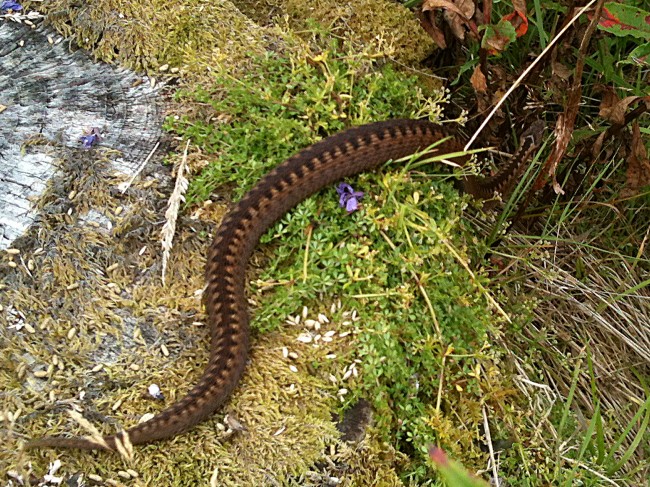 An adder heading for cover

After Struan returned with the camera, we headed to the upper Stinchar to look at the Traboyack Burn. I’ve surveyed the lower reaches of this burn several times over the years, but there were two upper sites that hadn’t been survey for some time. We decided to look at these and to establish another new site near the top of the burn. Working from the top of the burn downstream seemed like a good plan so we headed of to new territory. We picked a new site below and old ford near the upper accessible limit of the burn. Straight away we found salmon and trout which was encouraging. It wasn’t until we set about recording the catch that we realised that there were no salmon fry which was surprising as there were parr. No stocking took place on this burn in the last 2 years so these parr must have been naturally produced, so why no fry? The substrate appears to be highly mobile so I wondered whether redd wash out may be responsible for the lack of fry although I would still have expected at least a few to feature, as trout fry were present. 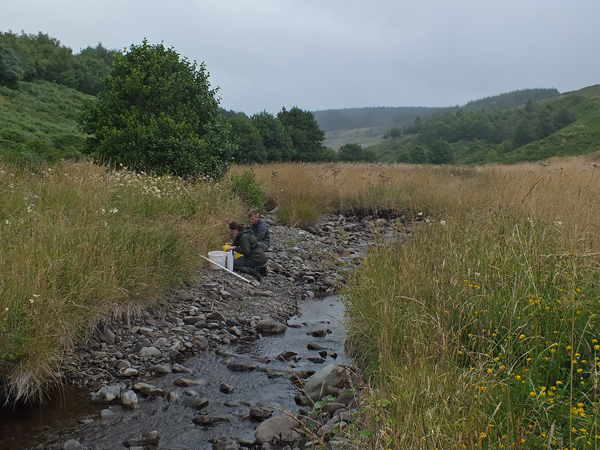 The new site near the top of the burn

We headed to the next site downstream looking at the burn as we went. Huge sediment bars were located at nearly every bend and some were several feet deep indicating that this burn must experience huge spates from time to time and the substrates are unstable in many areas. 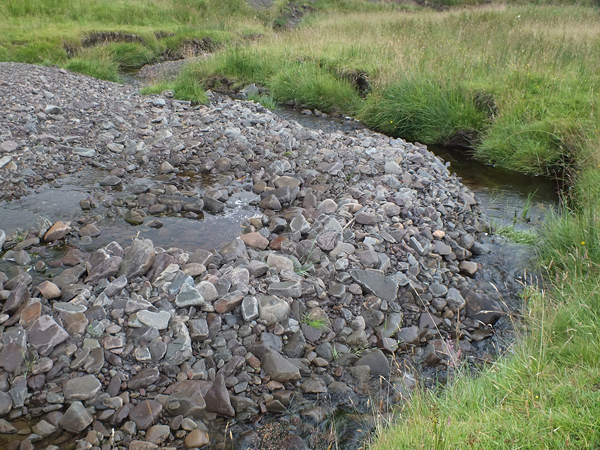 At the second site, again we found no salmon fry but reasonable numbers of parr and a few trout. I was beginning to suspect this was an access issue but where was the problem? We progressed downstream to the third site and once again, the same result… no salmon fry but reasonable numbers of salmon parr. This area had been fenced in 2006 and since then there has been a steady improvement in parr numbers and the habitat appears to have improved as there were many undercut and draped areas and developing trees and shrubs that offer cover for fish. Eels were also present but in low numbers.

The final site we visited was the one that I knew previously, downstream of the Lamdoghty Farm road culvert. This has always been a productive site and this year was no exception. The big difference between this and other sites was that salmon fry featured here in good numbers. So too were eels which we recorded in the 11-100 category. We saw many elvers and small eels in the stretch and a few bigger ones too. The culvert upstream has deteriorated and a slab of concrete has broken from the structure and partially lies at the take off point for fish leaping into the culvert. The upper end of the culvert isn’t great and may contribute to the problem. As soon as we had recorded the catch at the downstream end of the culvert, I looked on the bend upstream for fry. There were none but yet again parr were plentiful. This confirmed that the problem was access and lies firmly with the culvert. I will speak to the DSFB on this matter and hopefully a solution can be found quickly before next winter’s spawning. It would be a shame to lose another years salmon from this burn. 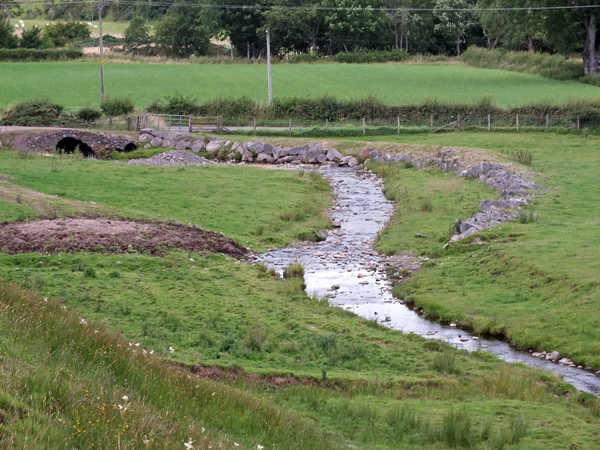 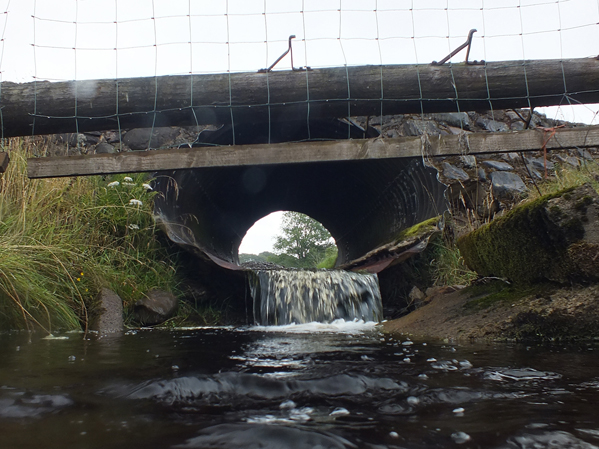 The lower end of the culvert is partially blocked by a concrete slab that may restrict the leaping ability of salmon. 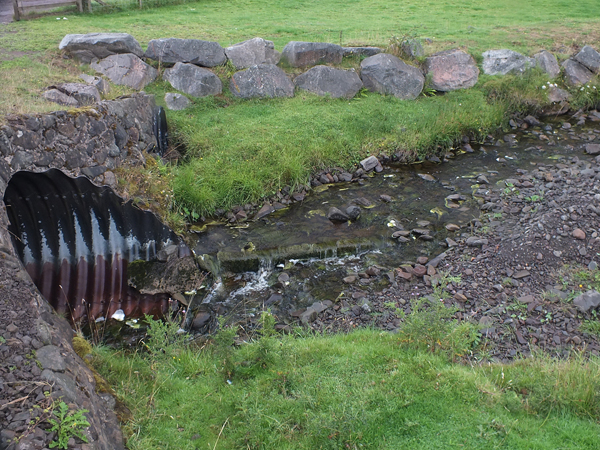 The upper end isn’t exactly good for fish passage either.

After finishing our survey work, we headed to Colmonell to give an electrofishing demonstration to Meryl’s Himalayan Balsam bashing volunteers, before we headed home. Apologies to Helen for our late return and I hope you managed to get to your climbing this evening. We won’t be electrofishing anywhere else this week as I have several meetings that I have to attend and we are in Arran at the weekend surveying for invasive species. 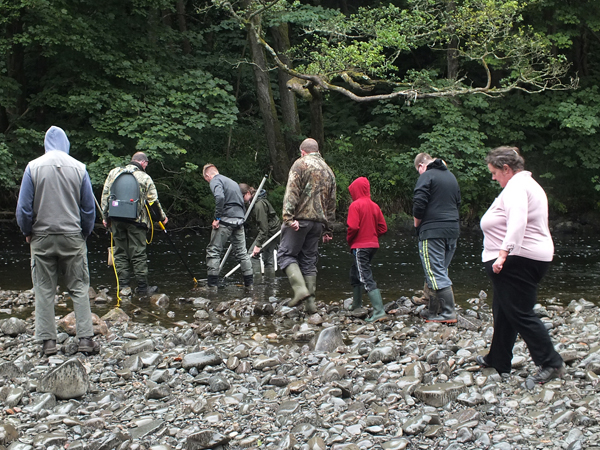 Next week we will be on the Culroy Burn in the Doon catchment trying to work out where the issues lie with this wee burn. We will also be looking at the burns above Loch Doon  dam and around Dalmellington to see how successful spawning was last winter, as reports from the bailiffs and hatchery suggested that there were few salmon on the redds. Our egg trials in these areas also indicated that survival may be an issue on some burns. I’m looking forward to seeing how this area has performed as the main stem sites were on the whole excellent.