We returned to finish off the Culroy today conscious that the DSFB had stocked fed fry from their hatchery operation yesterday. With this in mind, I wanted to avoid catching the stockies as much as possible but electrofishing isn’t selective so I decided to fish a new site just above the road bridge at Culroy. This site was upstream of of usual site, just 100 m downstream of the bridge. The habitat looked right and we set about surveying hoping that the fry wouldn’t have moved this far upstream in the last 24 hours. The egg box trial results we recorded earlier this year included a box from downstream of the bridge and the results were poor. I wasn’t filled with expectation however at least today we did find fish alive in the burn!

Trout dominated the catch outnumbering salmon by approximately 4:1 (I don’t have the actual figures at home with me so I’m allowing a degree of flexibility with these stats). Parr were few and far between. Gillian will calculate the actual density once she enters the results into the data base but I know it won’t be a great result. It does indicate that whatever caused the loss of all the fish further upstream didn’t impact this areas just as badly and this could be attributed to dilution by ground and surface water. Interestingly, a single salmon fry stood out from the others at 67mm, the rest being much smaller between 36mm and 50mm. This is unusual to find such a large size difference between the 0+ year class at the same site and I put this down to stocking. The larger fry I’m sure must have moved upstream over night from where it was stocked; the remainder being wild and naturally produced. It strikes me that the stocked fry place the natural fry at a disadvantage due to superior physical size and ability to compete for food and space (although at the density that we see here that shouldn’t be too much of a problem but it is an important point worth considering when stocking). I’ve taken scales from the larger fry to see if it shows anything unusual in it’s feeding pattern that would confirm it’s origins. The kick sample we took was significantly better than those upstream. 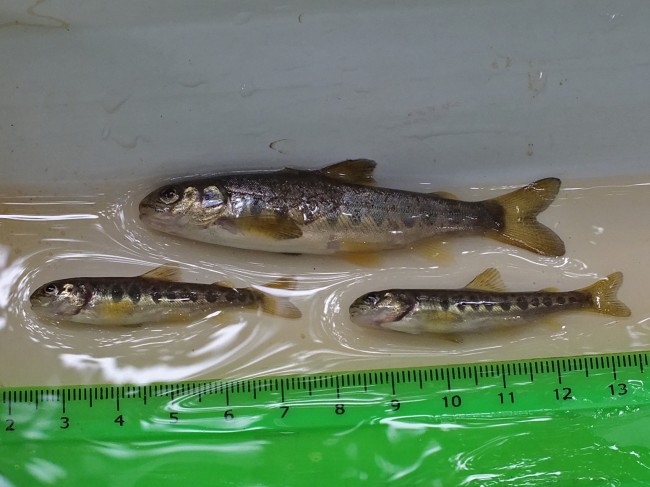 Further downstream at Minishant, we  fished just below the road bridge as usual. We expected to capture more stocked fry as we knew they had been released into this area yesterday and we again found a similar distinction between sizes. The natural fry in this burn are very small compared to the mainstem fry due to the cold water from the hill that feeds the burn which is about 4 degrees C colder than the river. Again we noticed a lack of 1+ or older fish. We found a couple of sticklebacks, one which was in splendid breeding colours. 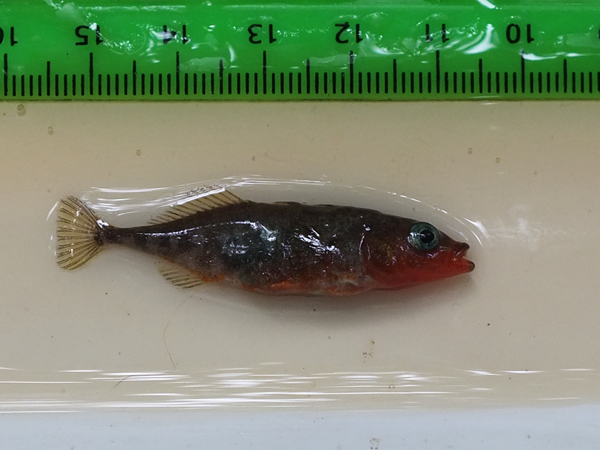 We also electrofished another burn on the Doon that causes me some concern; the Netherton Burn at Dalrymple. We had poor results from an egg box placed near Netherton Farm during the winter. Cattle poaching was an obvious problem leading to heavy siltation in the burn. We have previously fished the farm site and found a few salmon but not for some time. I thought I’d look at the lower end of the burn to see how it was performing. We picked a site about 100m upstream of the confluence. Instantly we knew we weren’t going to find many fish as silt was coating the substrates and sure enough the results were extremely poor with just 4 or 5 trout and a single salmon fry. This area is easily accessible to salmon entering from the river and had the habitat and water quality been adequate I would have expected a good haul of salmon fry. The substrates were very compacted, often a feature of siltation. Water clarity was ok but there was a tinge of opaqeness that indicates enrichment. Conductivity was high at around 400 micro seimens. I walked through the wood beside the burn and although it was sarsely vegetated in the understorey, it was obvious that this entire area had been heavily trampled over the winter months when cattle are allowed access. This situation continues all the way upstream to the farm and I will speak to the farmer to see if a less damaging arrangement can be found. I did ask SEPA to look at this burn after we placed the egg box in the water but they reported back that there didn’t appear to anything wrong. I wasn’t convinced then but I now have the evidence to back up my fears. I will speak to SEPA again on this matter if I can’t find a solution with the farmer. 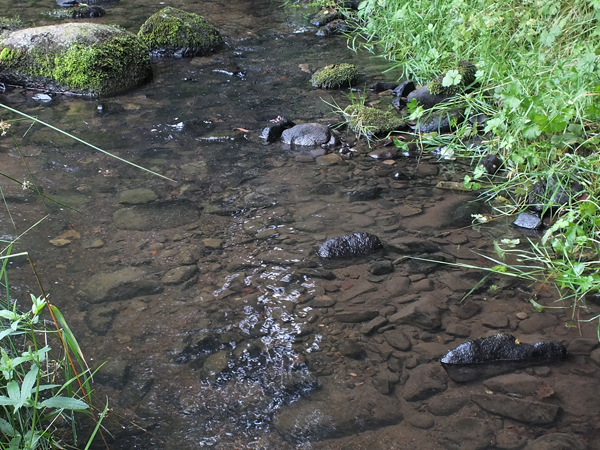 I expect that the lower reaches of this burn may benefit from some gravel cleaning but this will only be worthwhile if the cattle poaching issues are sorted.