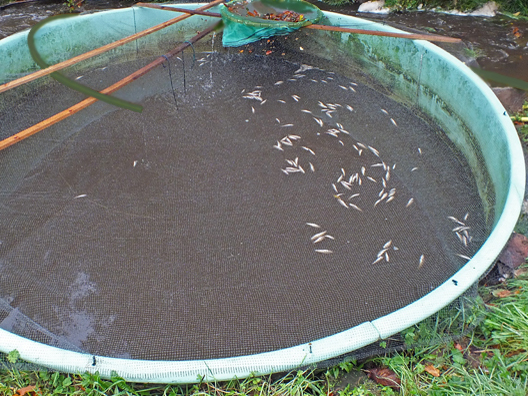 The sickening sight of over 150 dead fish in the tank. There was around 1000 fish killed in this incident.

Once again there has been an incident resulting in fish killed on the Ayr system. Almost a year ago to the day, the same burn was affected by a similar incident. I received a phone call this morning about the incident on the Yonderton Burn near Failford. A small group of motivated enthusiasts have set up a small fish rearing unit to bring trout on for the River Ayr. This small operation has been beset with difficulties since it was first set up about 4 years ago a short distance away on the Chalk River (aka the Mauchline Burn). In the first two season of operation, approximately 8000 brown trout fingerlings were stolen from a remote rearing pond. The operators eventually abandoned this site in favour of another nearby location that had a 24 hour presence.

At the new location, working with no funding, the enthusiastic team have twice reared brown trout to about 5 – 7″ only to watch them fail as the season progressed. Last year, an exceptionally large spate washed fish from the facility immediately prior to pollution killing those that remained in the burn nearby. This year, the fish have been killed in the tank by some form of pollution that came down the burn last night. I called SEPA who attended quickly this morning for which we are grateful. Water samples have been collected and the two SEPA officers left to investigate the source of the pollution further. We await an update but hopefully they will find something that is conclusive and take action against the culprit.

Update. After counting, there were almost 1000 trout killed in this incident.

I realise this must be very disheartening for all those concerned but each year they are motivated to try again. I hope they will continue but next year, they should release their young trout early to give them a fighting chance should something unforseen once again happen. Much as I am not a huge fan of stocking, I hate to see the frustration that is inevitable after such failures.

The Fail is appropriately named yet it doesn’t need to be. It is high time that the 35sq km catchment is improved considerably. We have watched as SEPA’s diffuse pollution initiative has attempted to encourage the landowners to improve their water margins and practices. Great efforts have been made but in all honest I see no improvement in water quality in this catchment yet. I may be wrong but this years electrofishing survey on the Fail is the first ever that has failed to produce salmonids and grayling. None, not one showed up but pollution tolerant species such as stone loach, minnows and sticklebacks were plentiful.

In 2007/08, I completed a dissertation paper on the Fail catchment and remember concluding that the burns from North side of the catchment were the only saving factor in an otherwise very poor system that suffers from diffuse pollution driven by intensive agricultural production and historical morphological alterations. Since 2008, I’m saddened to see a decline in fish stocks and presumably water quality rather than any improvement. This is the first major tributary upstream of the Coyle and it should produce many trout and salmon for the catchment each year. It doesn’t.

In my opinion, it’s high time that the regulator took a stronger stance over this issue and dealt harshly with those responsible. I don’t think I’m being impatient. I just don’t see any improvement to encourage me to refrain from expressing an honest opinion. I wish I did. I should add that the Fail isn’t the only burn that causes concern.