I’ve made a load of Brooodstck tags to keep a track of any salmon we take into the hatcheries before they are ready for stripping. Hopefully this will ensure there are no mix ups between fish from one part of a system and another.

Unfortunately pre printed tags are very expensive and have to be ordered from Australia (I’m told). I’ve come up with a simple colour coded system using coloured polymorph plastic. It’s a slow process making these things but they should work fine.

The River Ayr Board approved the plans that ART and the bailiff coordinator came up with. Hopefully this new approach will bring the desired results. Other hatcheries that I know are operating this year are the new Kilmarnock AC hatchery which has been granted approval from Marine Scotland for their stripping plan. The Kilmarnock Club will only stock the Fenwick Water side of the catchment with salmon. We moved salmon here to kick start the natural recruitment process in 2012 and 2013 when we undertook the fish rescues in Kilmarnock town centre. Salmon will be allowed to stock the Craufurdland Water naturally and we know about a dozen salmon were seen at the Dean Ford only a week or two ago.  Some were observed making it over the road.

The Stinchar hatchery is awaiting approval of their application. The Doon hatchery I believe will operate too but I’m still awaiting more information on this. Catrine hatchery isn’t likely to be in production once again as they are still to resolve their water quality issues. It’s a difficult predicament to be in after spending over £200K on a hatchery. Unfortunately water quality in this area of the River Ayr is categorised as poor according to SEPA’s published data; not ideal for a hatchery.

The Water of Girvan hatchery will be readied but hasn’t operated for 4 years now and given their remarkable improvements in juvenile numbers and the very good catch returns reported in recent years, I doubt it is necessary and in fact, ART would be supportive of leaving this out of production for a few years to see what happens. Dr Eric Verspoor addressed the Girvan DSFB AGM in 2009 (I think) and warned of the dangers of hatchery work. Since then, I haven’t really heard of any interest in rekindling the hatchery on the Girvan and personally I’m relieved. The saying ‘if it ain’t broke, don’t fix it!’ springs to mind. 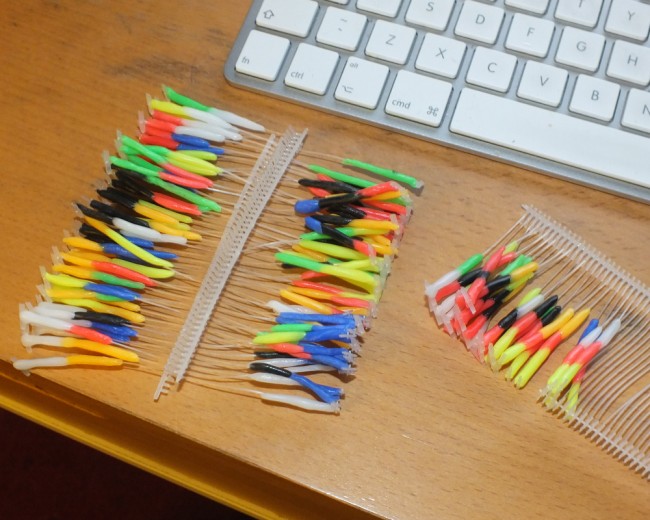 Colour coded tags to identify salmon taken into the hatchery until they are ready for spawning.