I walked the new Ponesk  channel a year ago exactly. Since that time Scottish Coal has gone into liquidation leaving this entire area in a heck of a mess with little chance that it will ever be restored satisfactorily. SEPA’s opinion is that water quality will deteriorate before it gets better. Things don’t look good on the whole but the new channel does. It is still changing in places but the habitat looks ideal for trout and salmon. Water quality appears to be good, although I did see a few new upwellings in the lower reaches, presumably as a result of rebound of the water table. 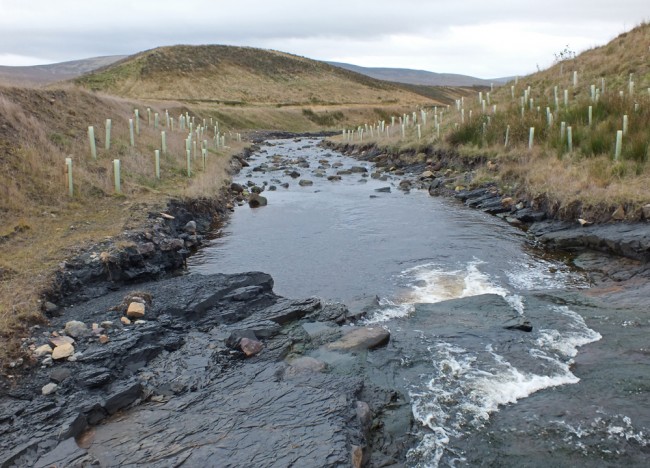 One area that initially caused concern appears to have stabilised now. A few of the planted trees have reached the top of the tubes so imagine this view in 20 years time. 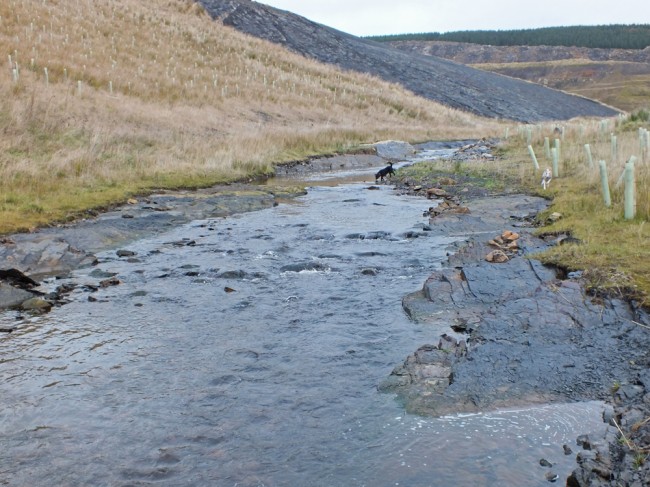 Another view near the top of the new channel

We know that a few salmon managed to spawn in the Ponesk during winter 2011/12  and 2012/13  and I’m hopeful this will increase through time as the burn naturalises. I like to walk it regularly from now until Christmas in the hope of seeing a salmon or two cutting redds. I didn’t see any signs of fish today but it’s early yet. It was a nice walk with the dogs if nothing else.

With all maintenance and activity stopped on site, the huge hole in the ground is filling with water. I wonder if this is a ticking time bomb for the river because it will eventually overspill and end up reaching the main stem. Whilst we have no evidence to confirm this water will increase pollution, we can’t rule it out either. The egg trials we undertook last winter allowed us to largely discount this type of water source as a problem for egg survival, however it does contain elevated levels of heavy metals dissolved from unweathered rocks. These may affect juvenile survival and we had hoped to undertake bio accumulation test on fry and parr this year but we couldn’t secure funding. I don’t see any other organisation showing any concern over the River Ayr’s poor fish stocks, or willing to investigate the causes of declines so I guess we will keep trying to find funds. I feel it’s essential that we understand why stocks have declined so badly. I doubt that diffuse pollution can be blamed solely as the Irvine suffers similar agricultural pressures yet fish numbers appear to be good (although we do lack enough data to be certain of this). 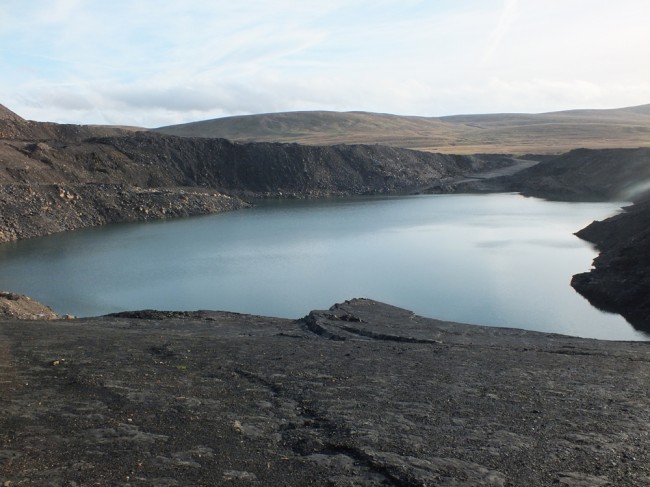 Compare the water level one year ago…. 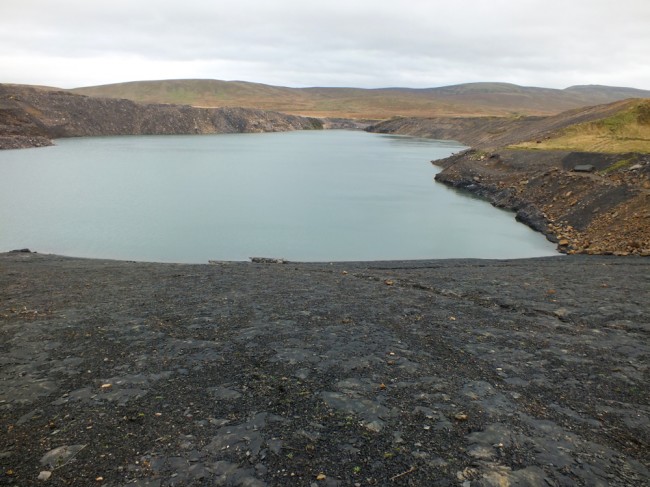 with today’s level. I wonder how many millions of gallons are in this hole?

I then headed to the Stottencleugh Burn at the very top of the catchment. This burn has been impacted by historic and recent surface mining and it’s catchment has been almost totally disturbed. Like the Ponesk, there seems little hope for future restoration. The bed of the burn is always coated with iron oxide deposits that arise as a result of mining. This burn is extremely important to Glenbuck Loch brownies for spawning. Unfortunately egg trials proved that none survived in our samples and this didn’t surprise me in the least. Below the orange deposits, the substrates are anoxic, deadly for developing embryos. I watched several trout cutting redds today and counted over 20 completed redds. 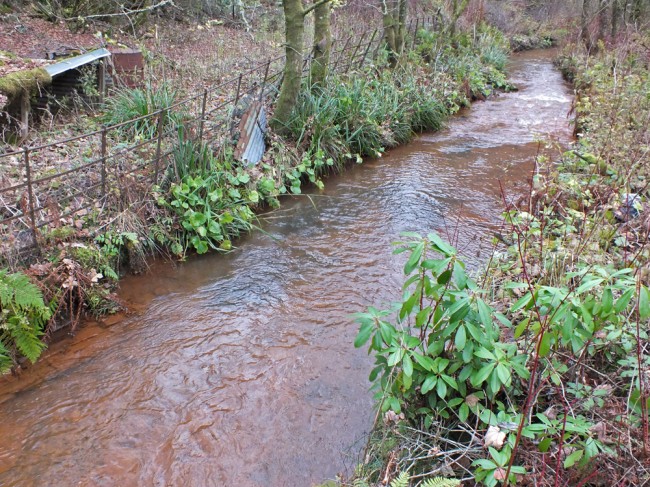 The dark areas are trout redds that have been completed. Unfortunately there is little chance that any eggs will survive to hatching. What a shame and what a disgraceful situation to be left with!

There is a tiny tributary (the Hareshaw) that seems to provide the only clean gravels for spawning but I found it had been blocked by branches and debris preventing access. I cleared the blockage and will return soon to see if any spawning has taken place. I hope so as this really is the only hope for many trout. 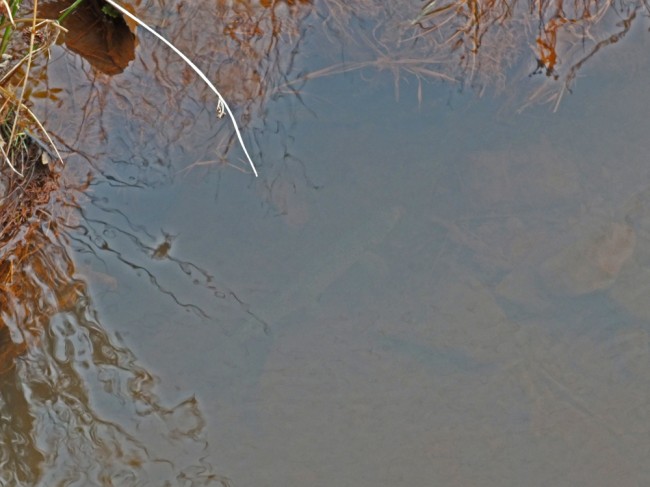 A nice trout lying under a bank. Only a couple of years ago, this area of the burn was in much better condition than the lower reaches however since the pumps have been shut off, it has rapidly deteriorated here too 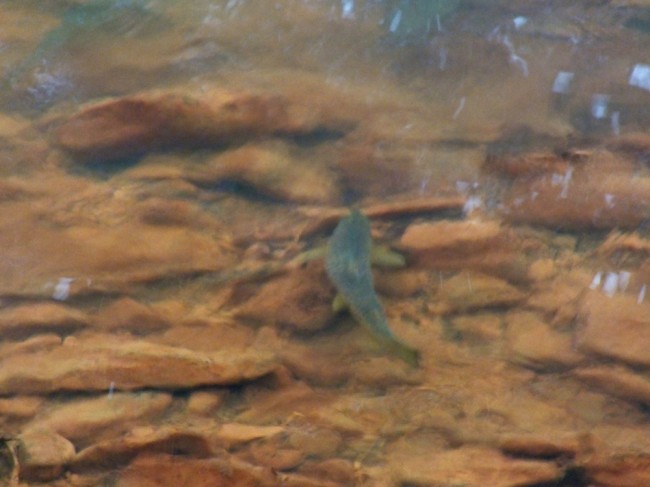 About 1lb in weight and looking for a place to spawn. There was another trout with it just upstream

In light of the severe problems the Stottencleugh Burn faces, I will speak to Muirkirk AC who have the fishing on Glenbuck Loch and see if we can work out some sort of mitigation measures to improve next years spawning results. I’m already halfway there with a plan.

One Response to Ponesk Coal site