Following on from Stuarts last post, I would just like to thank everyone who attended the fisherman’s supper last Friday. Yet again the support from everyone has been amazing and our raffle and auction on the evening helped us to raise some funds for the trust.

The evening kicked off with the meal followed by Trust Manager Stuart Brabbs giving a small insight into some of our work over the past year. Stuart then introduced a presentation to our outgoing chairman Peter Kennedy. Peter was the driving force behind the formation of the Trust and his commitment over the years has been instrumental in getting us to where we are today, Peter will continue as a trustee but has now handed over chairmanship to Bill Stafford. Previous trust biologist Brian Shaw was then asked to present a gift to Tom Lothian another trustee who was with us for some time, Tom continues to help in any way he can and has chaired our fisherman’s supper for the last three years. It was then up to Alistair Duguid to present Jim Stevens with a gift from the trust, Alistair was the first biologist to be employed by the trust and Jim had also been a trustee for may years and helped greatly when Alistair took on the job. It was great to see our previous biologists still supporting us and being able to present these gifts for us on the evening. Many thanks. 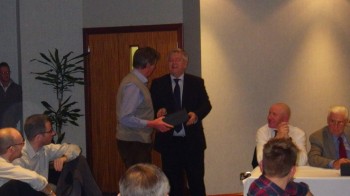 After the presentations our first guest speaker Bill Drury treated us to some tales of his exploits over the years from his time in Scotland and Russia as well as some tales from his recent work on the film ‘Salmon fishing in the Yemen’. It was great to see a former Ayrshire man tell us some tales of of his world adventures and we thank him for all his support.

A short break was followed by our second speaker o the evening, Niven Rennie came highly recommended to us by one of our past speakers and he did not disappoint. Niven had the crowd in stitches as he fed us joke after joke, a great after dinner speaker who we would recommend to anyone.

As the crowd settled it was time for our raffle and auction, the raffle had some excellent prizes on offer including a rod, rel, locally tied salmon fies, bottles of fine malts and much much more including some lines kindly donated by our guestt speaker Bill Drury. A huge thanks to all who donated prizes before and on the evening.

Finally it was on to our auction of fine sporting lots of fishing and shooting. The evening wouldn’t be a success without the generosity shown by beat owners and keeper alike. A huge thanks to all who donated lots and again to those who made bids on the night. Although we are equally grateful to all who made donations a special thanks to the Stinchar table who donated an amazing selection of fishing and shooting lots.

Again all at the trust thank each and every one of you for supporting us especially in the current economic climate and your continued support means so much. The total for funds raised on Friday came to just over £2100 which is another amazing total.

We hope to see you all again next year and if anyone has any new ideas for our supper please get in touch.