I had to deliver the pool names for the River Ayr map to Harriet Ellis today so I thought I’d have a look to see if any salmon or trout had spawned in the burn in the lower catchment.

The Sallochan Burn is well known to us a trout burn, probably sea trout and produces good electrofishing results when we survey it. It can produce respectable salmon numbers in some years but normally it appears to be more important for trout recruitment than it’s larger relatives. 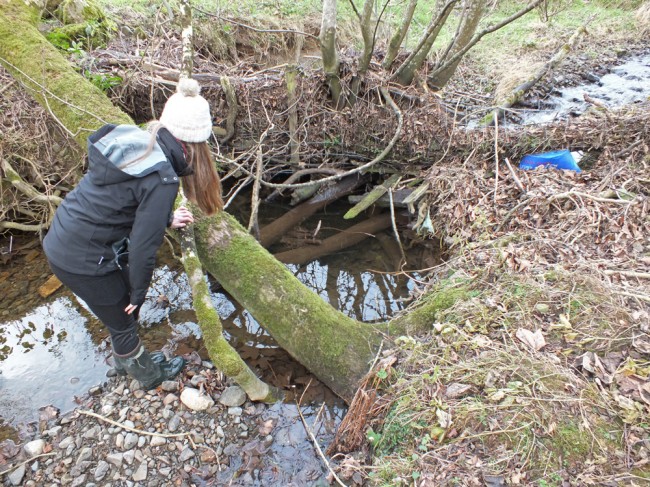 A substantial blockage on the Sallochan Burn that has taken down a stock fence but perhaps more importantly may prevent fish passage.

Meryl accompanied me this afternoon and we walked the lower stretch all the way from the river to our electrofishing site. We never saw any fish and only just a handful of trout redds. Salmon don’t appear to have spawned in the burn yet this season but there is plenty of time yet. Immediately downstream of our survey site, a substantial blockage had taken down a farm fence and was causing erosion of the banks upstream. I will contact the estate and let them know this needs attention. I am concerned that this blockage may prevent salmon and trout moving further upstream. 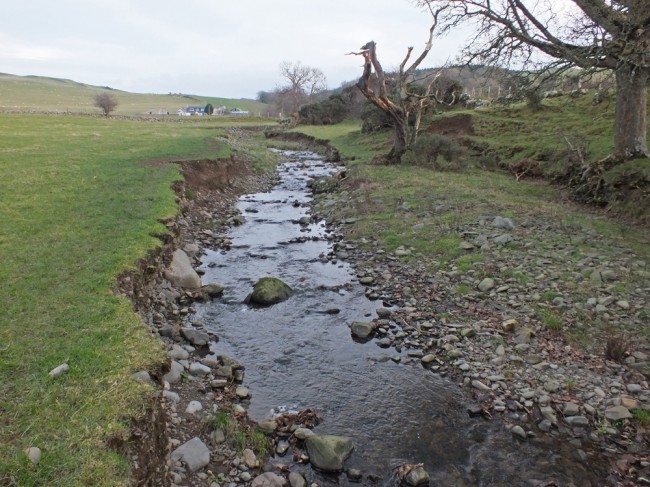 Erosion on the lower Sallochan Burn

Downstream, the burn suffers from erosion and despite efforts, it seems unlikely to be fenced in the near future. The main problem is that so much land would require to be put out of production to ensure that the fencing doesn’t get washed away quickly. The burn is highly mobile, over shallow and overwide. This is as a result of stock grazing and a lack of adequate  buffers alongside the burn. I expect one of the main limitations to salmon entering the burn is the very shallow riffles and runs that dominate the lower reaches. Unless there is a good spate flowing, salmon will struggle to move far upstream. This can only really be improved through fencing and planting. Trees and shrubs will help hold the bank together reducing erosion but stock must be excluded for this to work, hence the need for fencing. Very quickly, a burn such as this would start to narrow and deepen which should improve access. There certainly wasn’t a shortage of gravel and cobbles and this is added at every eroding banking. I suppose it is all about getting the balance right.

We looked quickly at the Crialoch Burn further downstream and once again couldn’t see any evidence of salmon spawning and just a couple of small trout redds. I will try to revisit these burns before Christmas to see if there has been any change. I’ll keep this blog updated with any news.

The mouth of the Stinchar at Ballantrae.

On the way back,  took this photo of the mouth of the Stinchar where the banks were modified a couple of years ago to allow the river to flow straight to the sea. So far, there doesn’t appear to be much change to the new channel and it still heads straight out to sea although I suspect a shingle bar may be forming and next time turn the river to the South rather than the North as it did until the modification. In the above photo, the white water at the river mouth may be as a result of the developing shingle bar that I referred to. It will be interesting to see how this develops over the next 20 years or so.