Annually the Trust compiles the DSFB and Irvine catch data to report to the ASFB. This is then published in the ASFB annual report and allows owners, anglers and visitors to compare rivers. 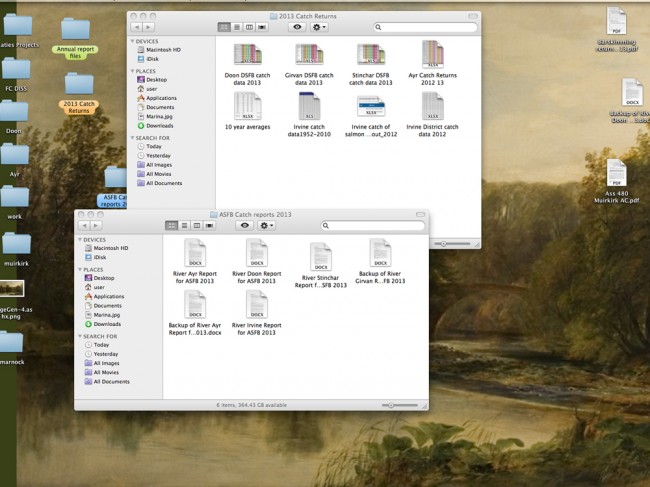 A screen capture with all the important files finally completed.

It is always a thankless task, chasing up missing data but with the deadline looming I’ve completed the returns including all the data that I have to date. 2013 will be a season quickly and best forgotten with the worst results since 2003 on the Ayr, Doon, Girvan and Stinchar.

The Irvine returns are sent straight to the Marine Scotland at Montrose so I always report their figures one year behind the other rivers due to delays in compiling data at the Government’s end.

Below are my final totals and they won’t change unless something appears in my inbox tomorrow morning but this is unlikely. These are as accurate as can be with the data provided. I will update this report in due course with full statistics including 10 year averages once I get time.

The catch and release rates are improving across all rivers but most notably on the Girvan, with an excellent release rate of 75%.