Scales from the big fish

After looking at the scales removed from the big fish and receiving confirmation from another couple of biologist, I can reveal that the fish has just entered into it’s 6th year of life. It spent two years in the river, one as a fry and the next as a parr before smolting and heading to sea in 2011. It then spent two years at sea before returning to the river to spawn in winter 2012/13. After successfully spawning,  it returned to the sea and regained condition,  putting on a few pounds before returning to the river a short time ago for probably it’s last time. 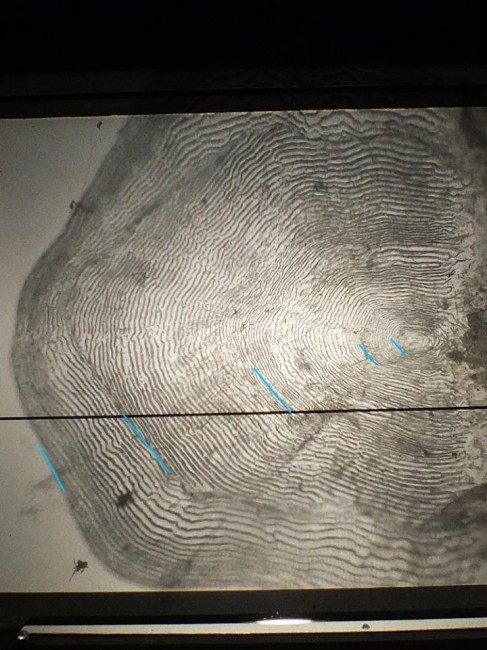 A scale from the big fish caught at Catrine. The blue lines indicate the end of each winter. This fish was a 2.2 sm 1

You read the age from the centre of the scale outwards. The first two years of life in freshwater can easily be  identified. Thereafter you will see the blue lines correspond to the outer edge of an area where the rings are closer together which indicates a winter and slower growth (just like happens with trees). The fourth blue line from the centre marks the readable edge after which significant erosion of the scale took place (indicating the first return for spawning) and this is a spawning mark. (written sm in the description). The last line on the outer edge of the scale showed there was no growth since the last winter and this is approximately the start of its 6th year since hatching in 2009.

2 Responses to Scales from the big fish