I walked the Ponesk today to see how full the void was looking. The burn itself was looking quite good but the lower 400m was showing signs of enrichment. 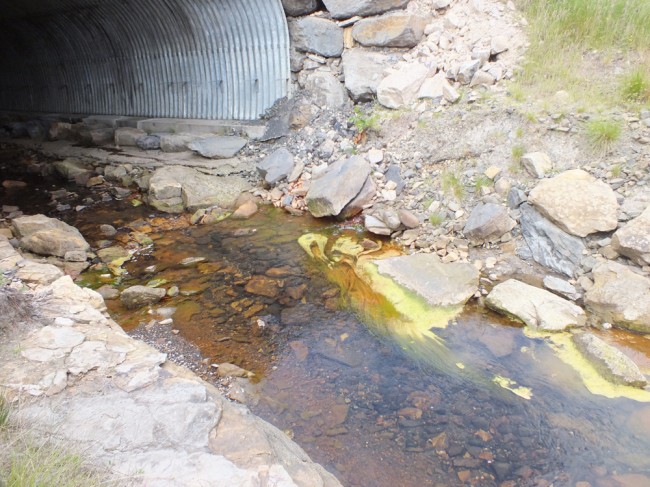 Upwelling groundwater entering the Ponesk causing enrichment. The filamentous alga feeds on the nutrients and coats the rocks and substrates as can be seen in the photo.

This is due to nutrient rich (probably iron mainly) water upwelling from the ground as the water table rebounds. Upstream of the point where the upwelling water reaches the burn, the bed was clear of algae and looked good. Thankfully there was still a reasonable flow coming down the burn and there were juvenile salmon or trout in most pools where there was a bit of depth. I think overall this burn should recover ok but it is a shame that there wasn’t more deeper pool habitat included when the burn was remodelled. 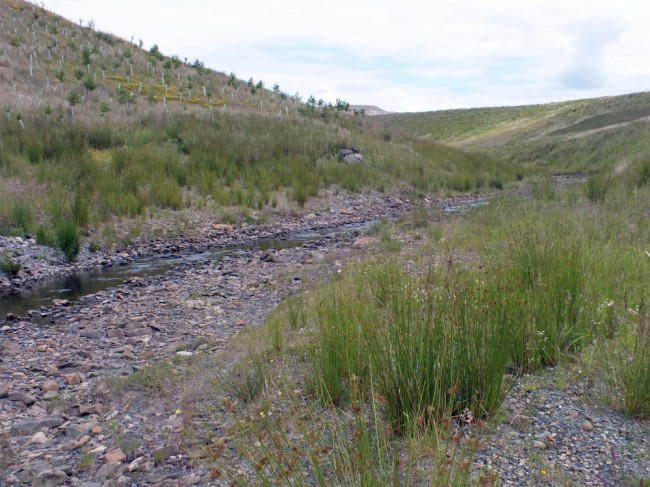 The habitat both in stream and backside is improving 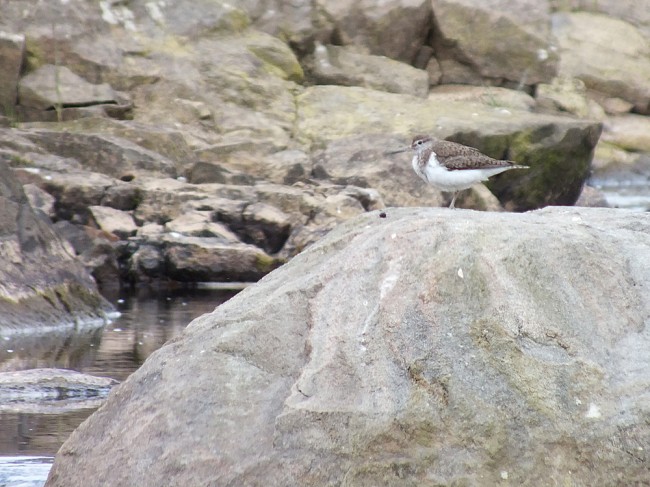 It was good to see a few birds on the site. The sandpipers had young with them and making a heck of a racket.

I saw one dead trout that I can’t explain as it was unmarked. Perhaps this was due to water temperatures in the last week as there is no shade on the burn yet. The trees are doing well and many are well above the top of tree tubes now. In a year or two, if no one else does it, we will cut the tubes from the trees rather than see them strangled and break. 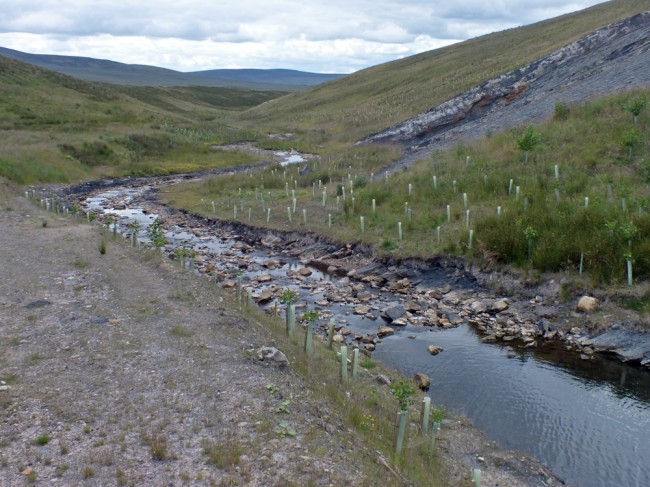 Looking downstream. The trees were doing well. In 5 years time this will look much more natural and hopefully should be full of fish

The ‘Ponesk Pond’ as I call it was pretty full and maintaining a similar level to the last time I saw it at the end of the winter. That’s worrying because another wet autumn and winter may see it overtopping and reaching the main river.Should the Ponesk Pond overspill and reach the river then it would just add to the enrichment problems that the upper river already suffers from. More on this below.

The Ponesk Pond was maintaining its level. What happens once this overflows (if it overflows) is anyone’s guess.

I headed up to the Stottencleugh at Glenbuck to see how it looked. As usual, the bed was coated with iron oxide. I had heard a rumour that the burn was to be diverted straight to the Ayr instead of into Glenbuck Loch. I doubt this would be approved by SEPA and we would oppose this as Glenbuck Loch is a sink for at least some of the nutrient that comes from the opencast and historic mines around Glenbuck. It’s better that the nutrient is reduced before it reaches the river as it would just deteriorate the condition of the spawning gravels further. 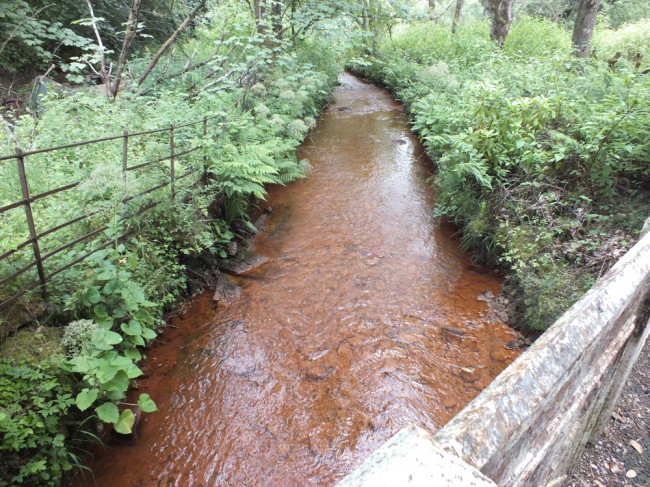 Stottencleugh Burn…not looking good but it hasn’t for many years. I do remember this burn in the late 80’s and it was clear in those days and an important spawning burn. We monitored egg survival here recently and none survived.

On the way back I stopped and looked at the Ayr around Muirkirk and downstream at Wellwood and I’m concerned by the obvious enrichment that stems from Kames area. The reed beds have made a big difference but they don’t catch all the pollution.  The Powharnol Coal site is another that is left abandoned by Scottish Coal since their demise. The Powharnol Pond is huge and just about full and I suspect it is draining into the river at Nether Wellwoood Bridge. The flow down the ditch has increased since I was last there. This too will add to the enrichment that’s obvious. The impact this may have on the spawning gravels and fish population is largely unknown but it does encourage weed and mosses to grow and these coat the gravels and substrates and trap mobile silts, thus reducing the quality and quantity of the available spawning.

Powharnol ‘Pond’. It appears to be overspilling to a ditch that meets the Ayr at Nether Wellwood Bridge.

The colour of the water between Muirkirk and the Greenock is tinged a horrible green. It is opaque and we often hear complaints from concerned anglers about this. The colour arises from the iron content and this is a result of the historic and possibly more recent surface mining. The impact this has on the habitat is obvious and leads to weed growth and algae and reduces the spawning potential. I’ve spoken to SEPA about this before but they don’t see it as the problem that we do. Without adequate funding for more research, it doesn’t appear that anyone will be doing anything soon to quantify the impact on the ecology. We have tried several avenues to find funding to continue the work we started , but as yet this has been unsuccessful. I haven’t given up hope but really it will depend on finding an interested MSc student as this is the most economical route available. Sadly the Trust just doesn’t have any reserves available at present. 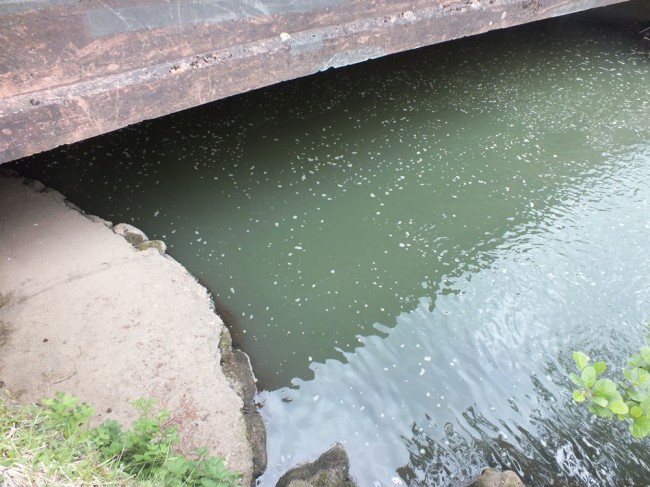 Wellwood Bridge and the River Ayr. It’s hard to believe that anyone could find this pollution acceptable.