After 5.00pm appears to be a favourite time to discover pollution and this makes it difficult for people to report it to SEPA, but it doesn’t really…. just dial the number as normal and your call will be answered by someone in East Kilbride who can action a response. Please remember to request an incident number and this will ensure that the call is logged and action taken.

The first pollution report I received this evening came from Kilmarnock AC informing me that fish were dead and dying in the Fenwick Water in Dean Castle Park. This was the site of a previous pollution incident that attended two years ago. I called the report into SEPA and finished what I was doing before picking Gordon up and heading to the river. Immediately we discovered a couple of large brown trout, dead beside the river. Crows were having a feast of these fish and the eyes and gills were the easiest meat. We met up with Sam and Sandy from the Club and they held aloft another cracking trout that had succumbed. 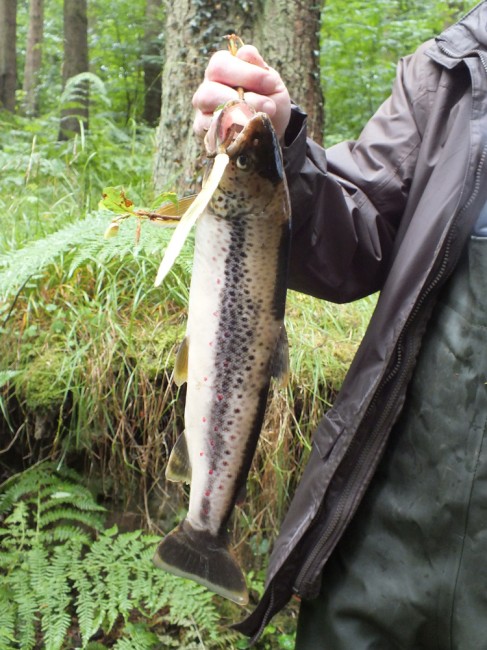 A large wild brown trout found dead on the Fenwick Water this evening.This was just one of several hundred dead or dying fish in the affected stretch. It was impossible to estimate accurately, the full impact this incident may have on the trout population as visibility had reduced due to surface rainwater reaching the river.

The pollution appeared to have come from a small burn that originates near the site of the North Craig Reservoir (long gone). This burn passes through a housing estate (possibly Wardneuk from memory) before entering a culvert under Glasgow Road and the new housing scheme built on the old Rowallan Creamery. I suspect some thoughtless resident of the estate tipped something toxic down a drain causing the incident. SEPA attended and took water and fish samples for analysis and I’m grateful to them for that. Given the condition of some of the fish, we agreed that the incident probably originated at some time yesterday but was still killing fish at the time of our visit. Hopefully the water samples will reveal the cause.

On the way to Kilmarnock we received another report of pollution coming from Mauchline Sewage Treatment Works on the Ayr. I asked that the person reporting it call it into SEPA and request an incident number. We spoke to the two officers at Kilmarnock and they did receive notification of this incident too when dealing with the first one. They had to head back to bag and tag their samples and arrange transport to the lab for analysis so we attended in their place. The incident will be reported to Scottish Water in the morning by both SEPA and ART. Scottish Water are currently upgrading the treatment works at Mauchline, however this was an unacceptable level of discharge given the little rain that had fallen. The river was discoloured for hundreds of meters downstream. 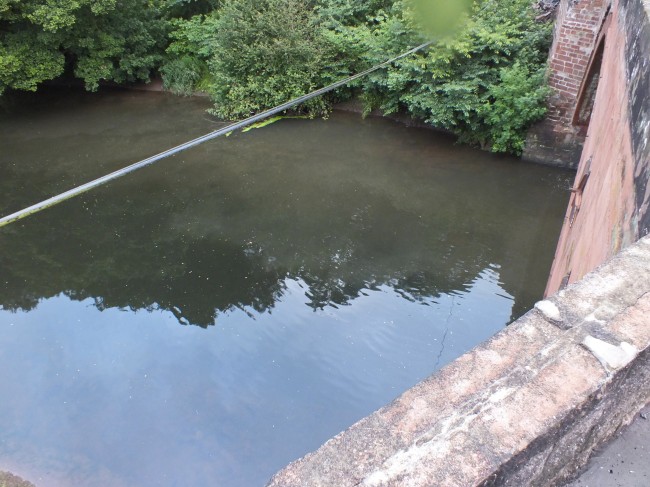 One Response to Pollution incidents today