We are facing a catastrophe on two Ayrshire rivers at the moment and there’s nothing we can do about it. The Stinchar and the Girvan are both affected by extremely high water temperatures of around 23ºC, and fish are dying in the lower reaches. 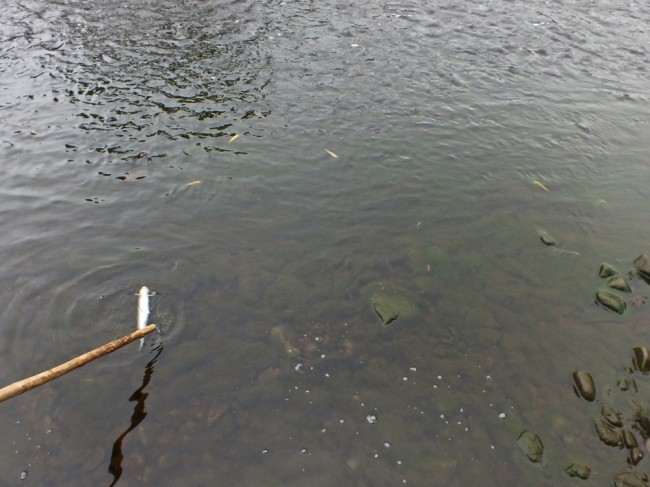 The Kirkhill beat near Colmonell notified me of a problem around 4.00pm last night. This was reported to SEPA and their duty officer attended but could find nothing out of the ordinary other than high water temperatures. Having discussed this with the SEPA officer, it seems likely that diurnal oxygen stress may be the cause of the mortality but it doesn’t fully explain why the fish affected are mainly parr and fry. High water temperatures holds less dissolved oxygen that cooler water. Oxygen dissolves into the water from the atmosphere, especially as it tumbles over rocks and through riffles and torrents. It is also produced by plants and algae through photosynthesis which occurs during daylight hours. Oxygen is constantly consumed by fish but also by plants as they respire during the hours of darkness when photosynthesis has ceased. It is overnight that we would normally expect to see fish mortality as a result of oxygen deficiency.  There isn’t much weed/algal growth in the river so I am more than a bit surprised by the number of dead and dying fish I saw this afternoon. Had it been an enriched river with a lot of algae, then it would be more understandable. 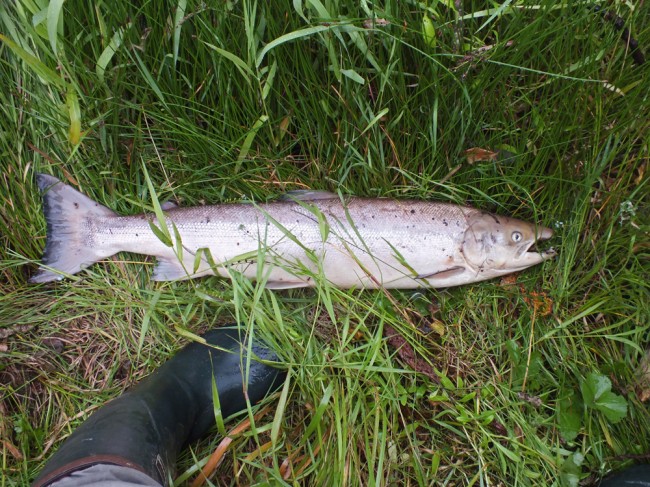 Temperature may be responsible in other ways too. As larger fish will take up position in the most suitable habitat, i.e. deep pool refuges, then the smaller fish are likely to inhabit the sub optimal areas. Marginal temperatures were yesterday recorded as between 21 and 24ºC. Deeper pool habitat is likely to be slightly cooler but studies have shown that they may also have lower levels of dissolved oxygen (Elliot & Elliot 201). Run riffle habitat is more likely to have increased oxygen levels but warmer temperatures. For salmon 22 – 28ºC and trout 21 – 25ºC appears only tolerable for very short periods after which mortality occurs. Elliot & Elliot state that thermal transfer in small fish is likely to have greater impact on survival than large fish, and therefore this may account for why so many parr were affected compared to comparatively few adult salmon and sea trout. Large salmonids were shown to have a preference for deeper cooler water than shallow warmer lies despite having more dissolved oxygen available.  I’m not sure whether the very dark water absorbs heat more easily than clearer rivers. Both the Girvan and lower Stinchar (&Duisk) are black, peaty waters. 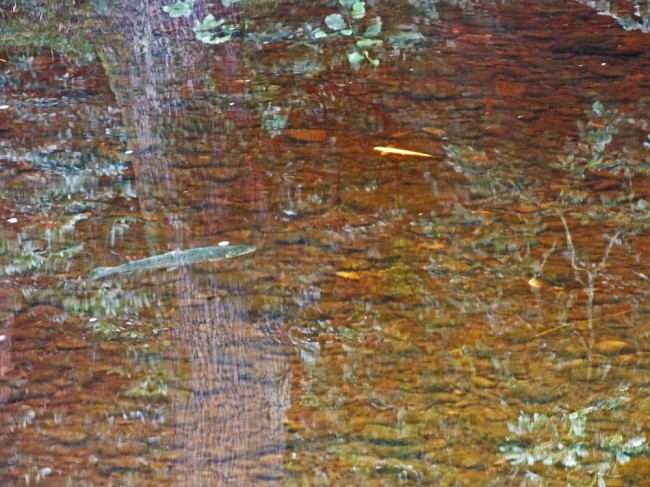 A sea trout of about 1 lb that was clearly struggling in the shallows. It didn’t more away as I approached. Parr were found dying during the day which may suggest water temperature was more critical than low oxygen levels (but of course it could easily be both)

Ultimately, both thermal and oxygen stress is likely to be responsible for the huge number of salmon parr that we saw dead today. The Stinchar appears to be affected only downstream of the Garnaburn area (I’ve checked elsewhere as far upstream at Glenburnie in the Wee Stinchar). I’ve estimated that there is approximately 10.5 km of river affected. Based on a rough calculation of the numbers of fish I counted in 130m above Colmonell Bridge, I’d estimate that there could easily be between 5- 6000 parr and fry dead so far. That isn’t accounting for any adult salmon or sea trout that we also know are affected but to a much smaller extent. All we can do is hope for rain and cooler weather. If the water temperature doesn’t drop soon, then I’d expect to see increasing numbers of adult salmon succumbing in the next few days. 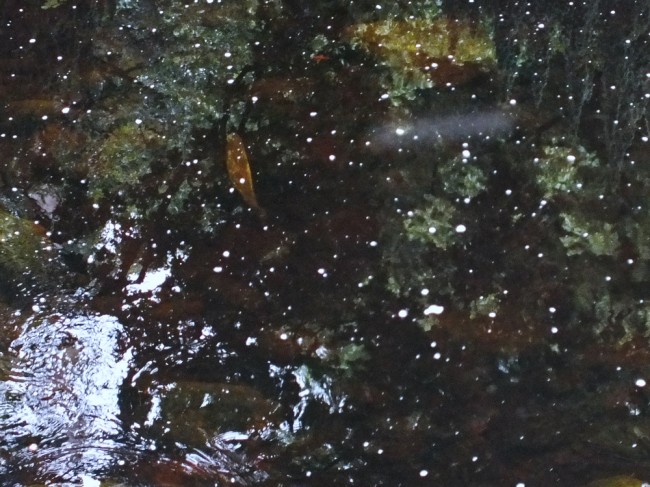 Another large fish that didn’t look to be in great health. I’m not certain whether this was a salmon or sea trout as the glare from the surface didn’t allow me a good view. 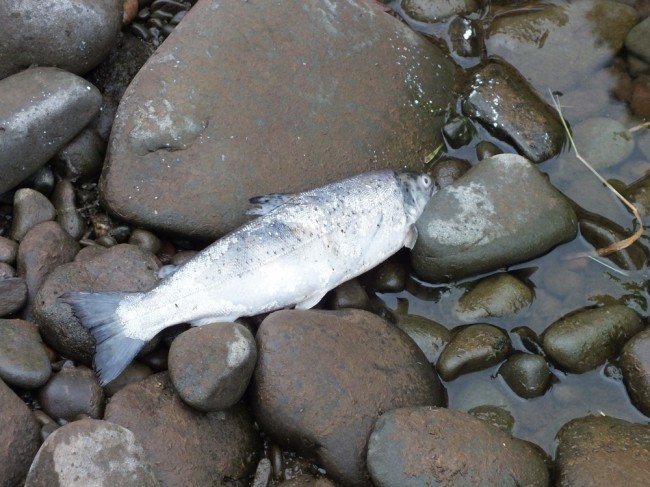 Yet another sea trout dead.

I was particularly saddened by the sight of sea trout dead in the river. The largest I saw was around 3 -4 lbs lying belly up. After so many years with hardly any sea trout in the river, I am encouraged by the number I saw today. Hopefully this incident won’t impact on their recovery too much.

After I left the Stinchar I headed to the Girvan where there were reports of dead fish in the lower Penwhapple Burn and the Bargany area on the main river. I checked Penwhapple Burn at Old Dailly and saw several parr moving in the pools so I hope it is only the lower reaches affected. I never saw any dead fish there but the head bailiff had reported large numbers near the confluence earlier in the day. I headed upstream to Cairnhill Bridge and found several dead adult trout and a few salmon parr. The Barganny keeper informed me that he had found quite a few fish dead in the main river as far up as the golf course at Dailly. He also reported large numbers of fish in the mouth of a burn, presumably either due to cooler or more oxygenated water coming off the hill. I continued upstream to Kilkerran where there was no sign of any mortalities. I checked again at Crosshill and there were no obvious dead fish.