Updates from SEPA on the recent events on the Girvan and Stinchar. Catrine fish pass extension

I took scale samples from the large trout we found dead at Enoch Farm Bridge on Monday. Trout of this size are a rarity in Ayrshire these days but even when more numerous, a sea trout of this size  would have been a trout to remember. The fish wasn’t weighed but estimated at around 6lbs. I checked the measurements on a fish calculator and it too confirmed it to be around this weight. 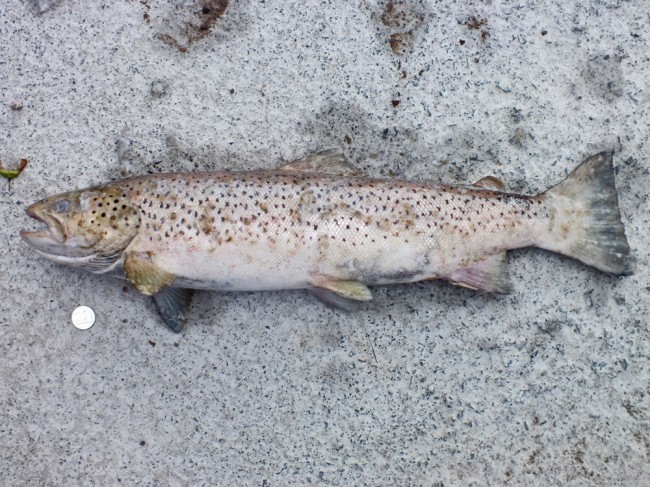 A large sea trout of around six lbs that we found dead at Enoch Bridge.

I looked at the scales today and have added the photo below that shows how I determined it to be 7+ years old. The fish hatched from an egg laid in winter 2006 and hatched in early 2007 (marked as 0+ years old) . The red lines mark where I believe the end of each winter to be. It spawned in 3 consecutive winters commencing in 2011. In 2014 the scale indicates that the fish continued to grow   before returning to the river recently. The fish hadn’t been back in the river all that long (possibly just a few weeks) but the photo above doesn’t do it justice as it was coated with mucous and fine algae/sediment. 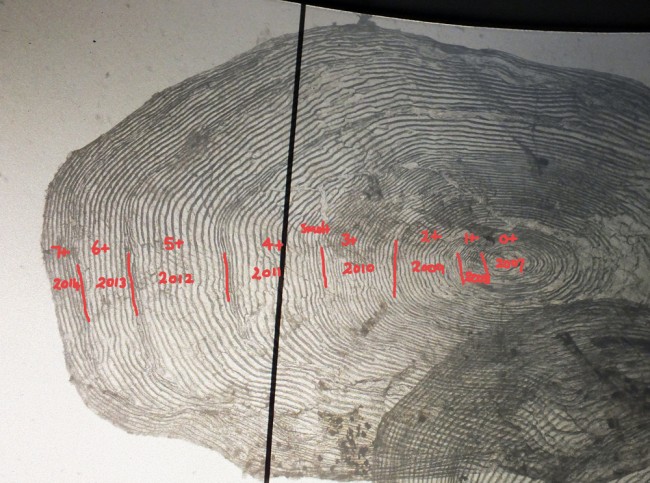 At least this fish had passed it’s genes on to other generations which we can only hope have survived the recent incident. It was good to see that there are sea trout returning to the river in reasonable numbers. Let’s hope this continues throughout 2104 and beyond.

I also took scales from the 12lb salmon we caught. Every single one of the scales were replacements and I can’t age the fish with any certainty as the early freshwater years are absent. However, the replacement scales appear to show that it had spawned last winter and returned for a second time recently after making a good recovery and adding growth rings on the outer edge of the scale.

The fresh water life stages are largely missing from the scale and it could easily have hatched in either 2010 or 2009. I took around 30 or more scales from this fish as it was dead anyway so am really unlucky not to find at least one original scale to look at. It probably suffered some trauma such as a bird attack during the latter part of  2011 causing it to lose scales from the area we sample. 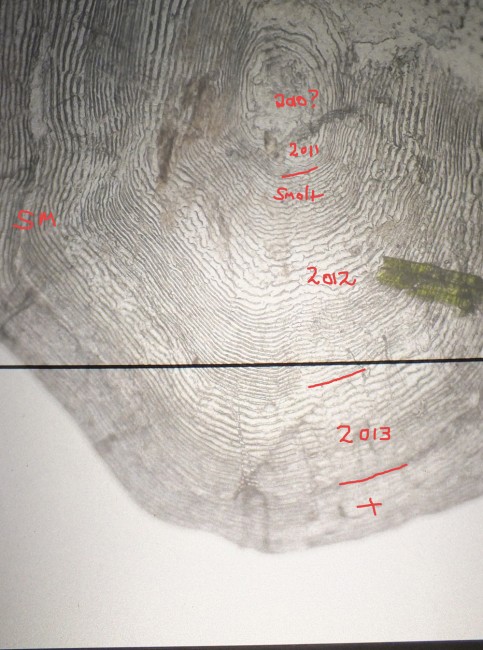 A scale from the large salmon we caught at Enoch.

Updates from SEPA on the recent events on the Girvan and Stinchar. Catrine fish pass extension
Share →
Tweet