At last a real spate on the Ayr

While all the other Ayrshire Rivers have had a decent run of water at some point over the last 2 weeks, the Ayr had been rather short changed by comparison. This morning when I checked river levels, I was pleased to see that the Ayr and all other rivers were flowing well. I headed to the Catrine Dam to see how it looked after all the modifications. There was a good spate going down the river and the contractors were restricted to working on the stonework in the lade under a hastily erected shelter.

Anderson’s was looking ok and I’ve no doubt that salmon should find this easier than before. It is difficult to compare the new flow to pre works levels and we will just have to work out whats a good spate compared to previous years. 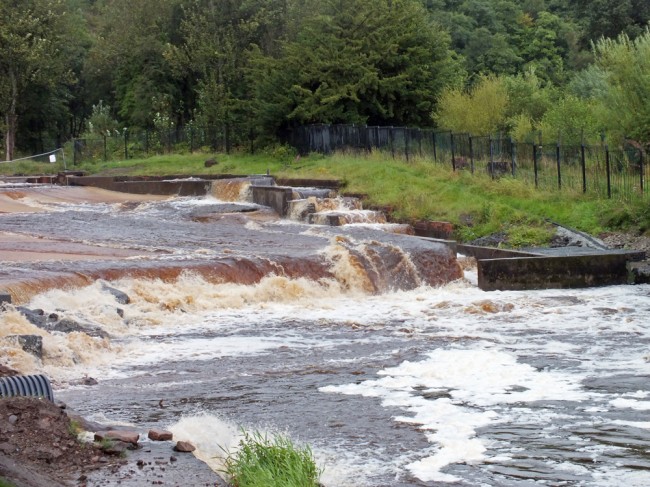 The spate this morning. 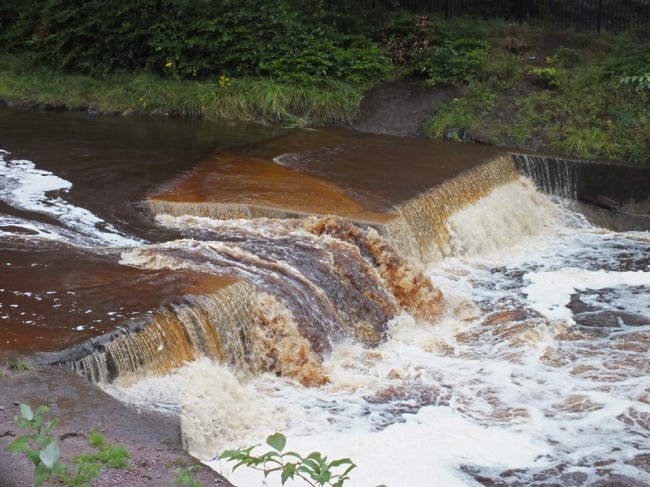 Anderson’s during a good spate. Prior to the alterations when the apron overtopped it was a good spate, so this had to be a fairly good run of water.

I didn’t see any salmon moving but this wasn’t that surprising as the river only shot up after midnight. There’s no doubt that fish will be on their way. I returned this evening as I didn’t have time to look closely at the fish pass in the morning but I had noticed that a large volume was spilling both from the fish pass onto the new dam back and back again into the fish pass. This wasn’t the plan.

At around 5.30pm, the river had risen a fair bit from the morning levels. Anderson’s was a torrent but I expect it was passable without too much trouble. The fish pass and upper weir was rather a different story. Flow through the pass could only be described as a torrent. The chambers just aren’t big enough to dissipate the energy and turbulence of high flows and the lower sections were  filled from the flow over the dam back. The side walls are inadequate to prevent ingress from the dam as illustrated in the photo below. 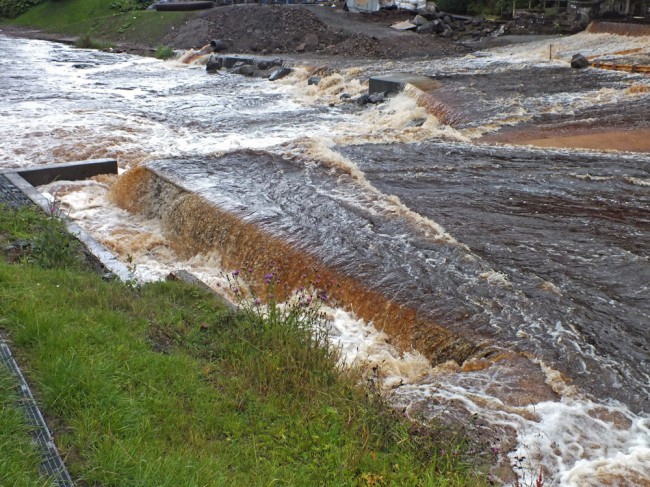 The lower chambers of the fish pass were drowned by overspill from the dam back. 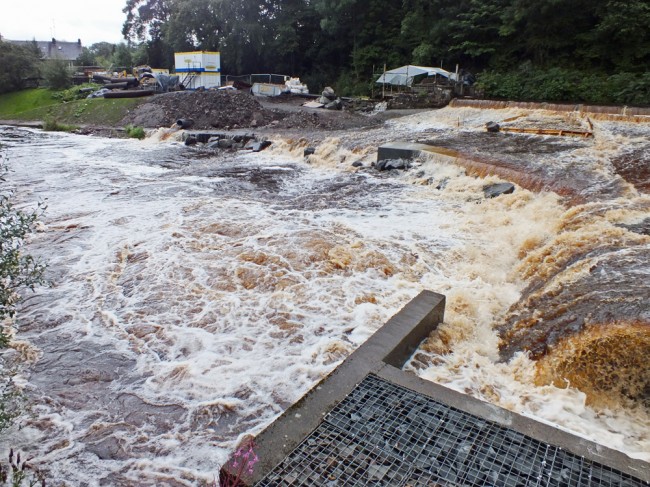 The entrance to the fish pass was just a maelstrom of turbulence and I doubt if migrating fish will find the fish pass easily in such flows. 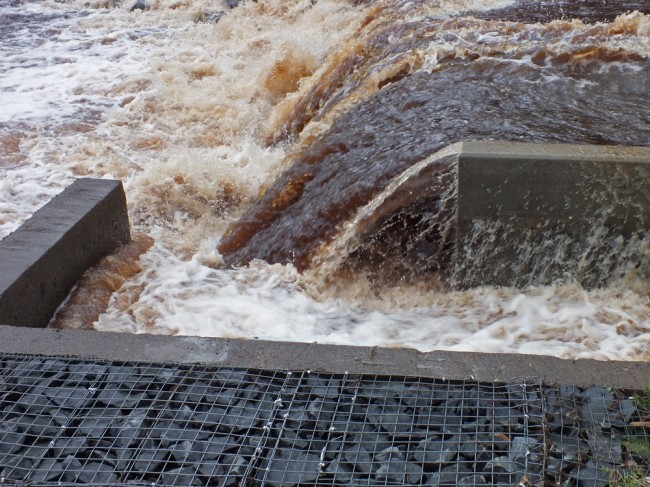 The boulder field is at the base of the wall. The flow from the dam-back overshoots it by some distance. I expect there will be significant amount of scour at the end of this wall once the spate subsides.

It is perhaps too early to be definite of how the pass will perform once the piling above the dam is removed but I think we can safely say that during very large spates, it may be a difficult passage for migrating fish. The river is artificially elevated above the dam at present by perhaps as much as 18″ or 450mm. This may be having the effect of pushing more water down the fish pass than should be expected once the piling is removed. The final crest height of the weir should be exactly the same as before work commenced. I am certain that the side walls of the fish pass along most of it’s length are inadequate. ART has highlighted this throughout the consultation. We were surprised to see that only one wall was raised during the contract and this was overtopped today. This needs more work and I’ve written to the Trust today on this matter suggesting a meeting with interested parties to discuss this requirement.

I still have concerns over the wall at the entrance to the fish pass. For as long as I can remember, ART suggested that this wall should be removed to improve access to the ladder. On seeing the flow over the dam today, the entrance to the fish pass was all but obliterated by the strong flow coming from the smooth surface of the weir. The boulder field was effectively redundant and salmon are likely to try to take the route over the dam where there is no resting place. In fact I heard today that a salmon had been seen taking this route but I can’t confirm this. This again wasn’t in the plan. I’m not sure how this can be addressed unless the end wall is removed and the fish pass extended. This will be a point for discussion with CCT, the Board and SEPA at some point in the near future. It is unlikely that any alterations could take place until the crest of the weir is completed and the final flows are assessed over a range of heights. 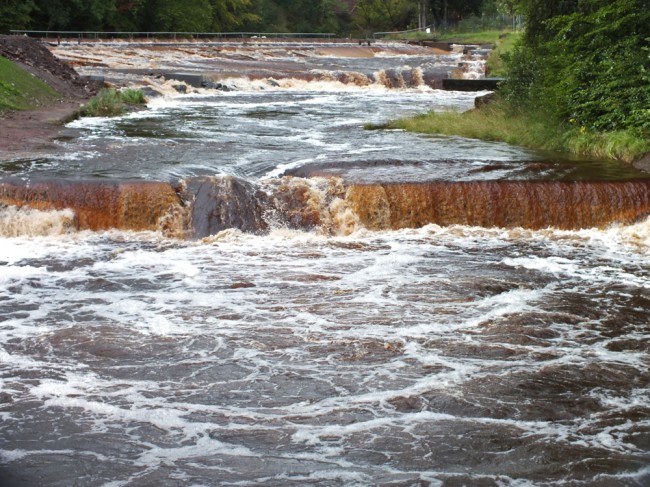 A view of the river at Catrine in full spate

4 Responses to At last a real spate on the Ayr