Today, we finally completed all the Ayr catchment surveys planned for this year. As usual, there have been numerous surveys on what is Ayrshire’s largest river with the most problems. That said and done, it’s always good to find something new and encouraging to report and this year there has been a few particular finds worth noting.

The Ponesk is improving following its relocation. It still has a long way to go but fry densities already beat most lower river sites and many in the middle reaches. In years to come, this will become a productive wee tributary.

Salmon were found on the Dippol Burn at the Head of Greenock Water. This was a new find for ART staff and we will look at this burn more closely next year. Another burn at the top of the Greenock, the Slot Burn, still has a few salmon in the lower reaches but we didn’t find any further up this year.

Another first for the Lugar side of the catchment was the discovery of a salmon parr, far up the Burnock Water. At the same site we recorded trout, two species of lamprey, eels, stone loach and minnows. Conductivity levels have increased in the last few years and this season we  recorded levels around 700 compared to 90 in 2011. This increase is concerning as it indicates that some form of enrichment is occurring in the upper reaches somewhere. We’ve reported our concerns to SEPA.

Catrine Dam works are virtually complete. Contractors should finish tomorrow ahead of schedule and the river will be free to flow over the dam again. We will now assess the performance of the fish pass to see if there has been any improvement.

On the down side, electrofishing results were down considerably on last year at some sites, particularly on the Lugar Water but we have yet to look at results in detail. The spawning areas appear to be impacted across the catchment by sediment and algal growth and we hope to soon undertake gravel cleaning before spawning inn an attempt to improve things.

Tomorrow we head back to the Doon to look at the upper catchment in more depth. Numbers are poor this far up the catchment so we are trying to work out exactly where the problems lie. We have applied for funding for this project and hope to deliver some new approaches commencing next season. 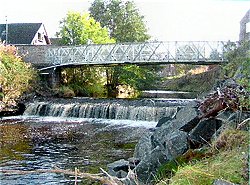 On Saturday we start the Irvine Surveys and these will continue next week. We are looking at the upper catchment to establish how productive the main river and tributary burns are. This will be the first time we have looked at the Irvine for several years and it is thanks to the clubs for agreeing to support our efforts. Anyone from the Irvine wishing to come along, please get in touch.

One Response to Ayr surveys completed….. what’s next?