We had planned to visit Loch Doon burns again today but plans changed slightly this morning and we decided that time was too limited to do this justice. Instead we headed to the Meikleholm Burn at Patna where we have arranged a contractor to install fencing (part funded by the Doon DSFB) and plant a few broadleaved trees to help improve the habitat. This wee burn produces a few salmon each year but the lower reaches where there is greatest potential for salmon production are prone to erosion driven by grazing livestock. The burn was last surveyed in 2009 and we returned today to fish the same site. This area had been fenced and planted a few years ago and is looking much better than during my last visit. 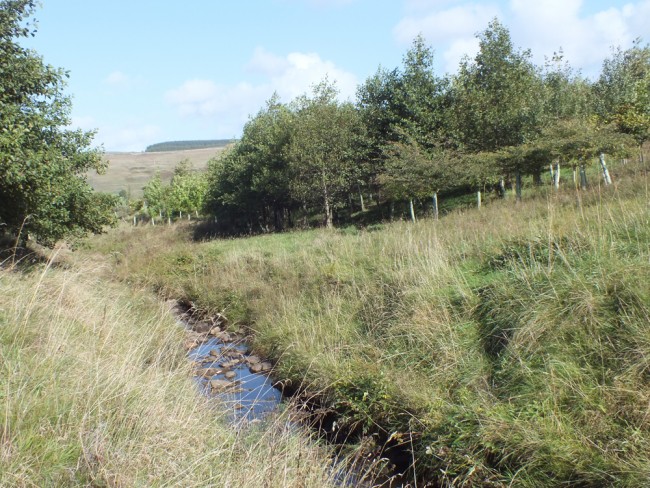 Looking downstream on Meikleholm Burn where the trees are doing really well in the fenced area. A few more years and they will offer the burn shade in places.

Water levels were extremely low and I expect have been all summer so I didn’t really expect great results. We managed to find 9 salmon and 7 trout which considering the flow was pretty good and surprisingly consistent with the 2009 survey. 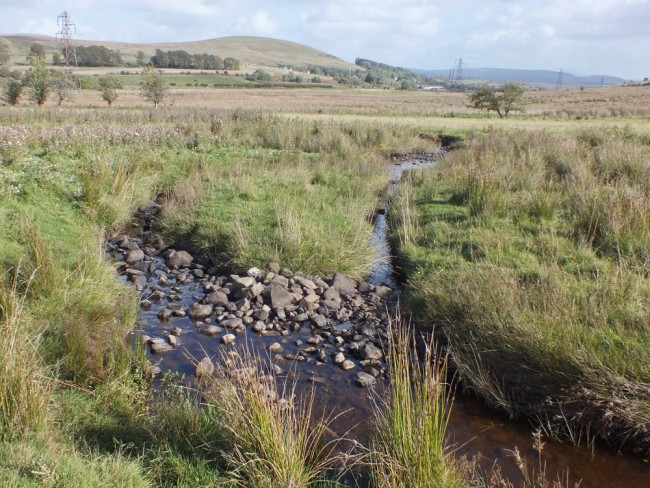 The contrast between this and the upper site couldn’t be more obvious. Fencing is about to go up and hopefully over winter we will manage to plant a few trees in the buffer areas.

We headed to a typical area downstream where the fencing is to be erected. The gradient was lower and the habitat more suited to spawning however the erosion and lack of cover doesn’t encourage this. The new site produced just 12 salmon fry and 11 trout. I expect in just a few years time we will be able to report that these numbers have improved once the fencing is up. Of course, installing fencing isn’t just aimed at increasing fish stocks but also at improving water quality which is equally important. Trees will provide leaf and woody debris that helps to increase invertebrate numbers which in turn feed fish. 50 years from now, global warming is expected to lead to water temperatures increasing and planting trees now may help combat some of the impacts this may have on the fish population. The Boards positive action to fund fencing is a sensible and worthwhile approach to management that will benefit of the fish and river.

We also visited the Cummock Burn at Sillyhole Bridge where the Trust installed fencing around 10 years ago. Since the fencing was erected,  the burn has deepened considerably, and marginal cover has increased providing excellent fish cover. 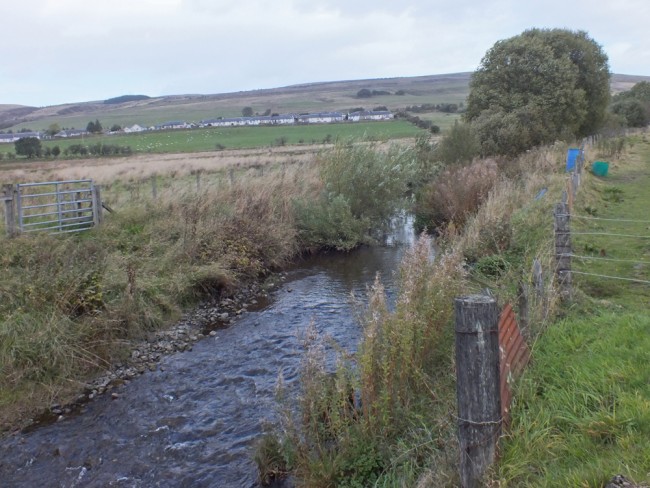 Great cover for fish has developed at the Cummock Burn following fencing in 2004. The site has deepened considerably and narrowed offering all year classes habitat and cover. The flow has narrowed at the top of the site and this results in scour and deepening.

Despite increased conductivity in this burn (as a result of mine inputs), we found very good salmon and trout numbers today. We had to reduce the length of the site by about 50% due to the depth in the upper section. Over the last few years, the site has changed enormously and is now too deep and overgrown to fish effectively and this is as a direct result of the fencing. Overall this site has improved for all year classes of both trout and salmon with areas suitable for fry, cover for parr and deep over shaded areas for adult fish.

I keep hearing reports from Dalmellington anglers and the Board Bailiffs that there aren’t any fish to be seen on the reeds at spawning time in the burns around the town. I’d suggest the results below indicate that there are fish spawning on the Cummock Burn in this area.  Todays result of 78 salmon fry and 31 trout per 100 sq m (this without stocking enhancement) support this. The greatest stock enhancement can be achieved by improving habitat.  I did note that the conductivity of the burn was considerably higher than in previous years and the enrichment was obvious on the substrates. The source of the enrichment I believe is from the Pennvennie discharge where the Scottish Coal Surface Mine now lies abandoned. Unless restoration takes place, I can’t see this situation changing for many years. I’d suggest that cleaning the gravels in the next few weeks would improve spawning success further. 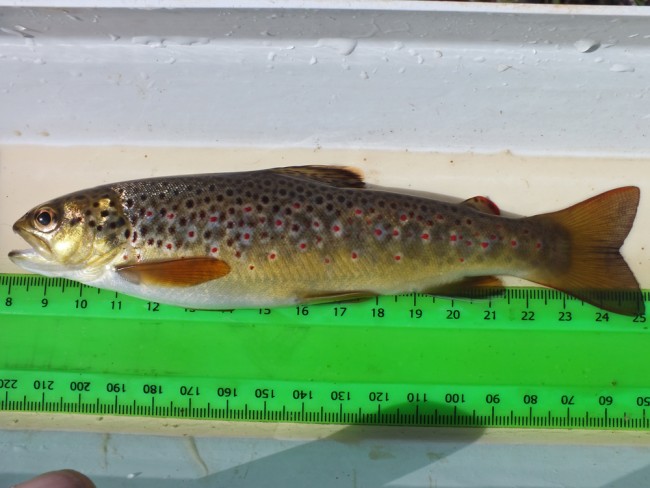 A stunning trout from below the willows

Finally we fished the Burnton Burn for the first time in a few years. Once again this burn suffers from high conductivity as a result of historic mining however it manages to produce and support a good number of trout and a handful of salmon fry. I doubt it will ever produce a lot of salmon but perhaps if the enrichment was sorted out it might. From a relatively small site we caught 6 salmon fry and 41 trout of different year classes. 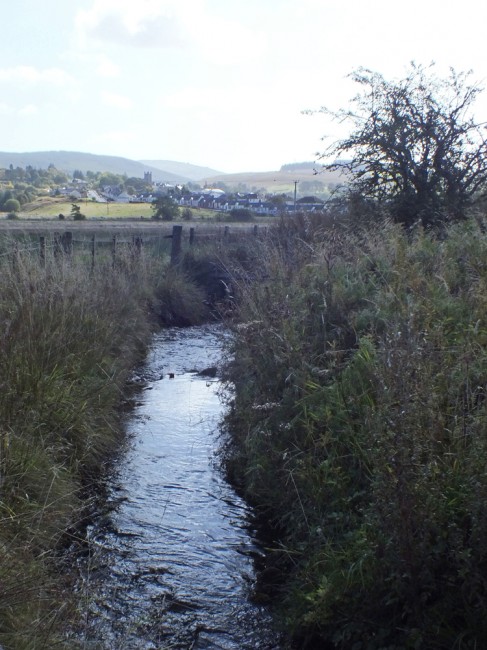 The electrofishing site at Burnton Burn with Dalmellington in the distance.