River Girvan DSFB meeting and AGM Observations on the Assel

On Monday and Tuesday, the staff attended the CIRB conference in Stranraer accompanied by our Chairman and vice Chair. The event was organised to share lessons learned over the course of the 4 years that the CIRB project has run and good practice that has developed as a result of the partners work. The Project allowed widespread control of invasive weeds across our catchments and the restoration of native biodiversity.

ART presented a poster on Japanese Knotweed control followed by a workshop designed to steer partners and attendees to develop a way forward once the project ends in December. We also heard from Queens staff on valuing non market goods and in particular valuing strategic control of invasive species and from CABI on biological control methods such as the Psyllid that has been released to attack Japanese knotweed and himalayan balsam rust that they hope to release shortly to weaken this  species. There was also a short film about the project that illustrated the success of the strategies adopted and should be an invaluable tool to encourage funders to assist in future.

As the conference ran over 2 days, it was also a great opportunity to get to know people that we deal with a bit better and it was a very social occasion and highly beneficial.

Day 2 started with a biosecurity demonstration of dipping tanks for anglers. We have ordered one of these tanks for use in Ayrshire and will encourage clubs and beats to consider purchasing one for themselves. Finally we visited a site on the Luce that has been the focus of Japanese knotweed control. We discusses potential problems that may still arise on the site despite control being highly successful. 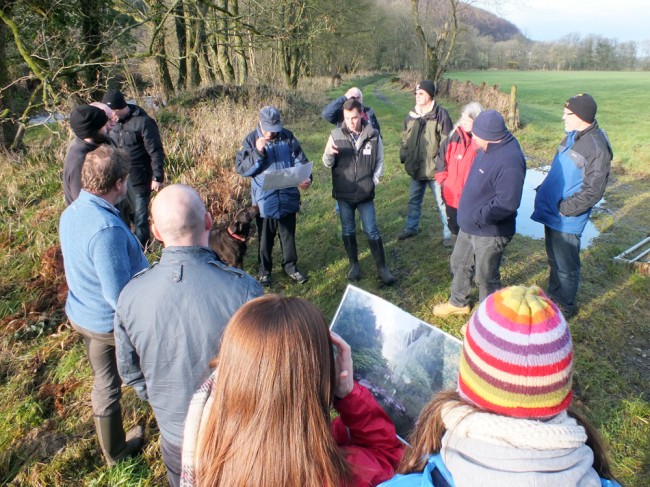