Annually ART compiles catch data from all Ayrshire Rivers for inclusion in the Association of Salmon Fishery Board’s annual report. As the Rivers Irvine and Garnock don’t have a District Salmon Fishery Board, catch data are submitted by Angling Club Secretaries to Marine Scotland who report results direct to the Scottish Government. ART requests and includes this catch data for the Irvine Improvement Association to help promote the river. Unfortunately this data only becomes available almost a year behind other reporting rivers in Scotland due to the procedures however it is always good to compare results from year to year.

It has been 20 years since catch and release started increasing in popularity and reported separately in these returns and I’ve drawn some graphs that both illustrate the improving trend in catch and release across reported catches on the Irvine, Garnock and their tributaries and the total catches of salmon and sea trout. Of course, these figures are compiled from the data provided and don’t take account of unreported catches. We know from various sources that under reporting is significant on this system (and others) and this devalues both the information and value of beats. The Government recognise this and the recent Wild Fisheries Review recommended that valuation of rivers is separated from reported catches in future to help improve accuracy of reporting. Hopefully this will follow in the not too distant future.

The Government are currently considering introducing mandatory catch and release of salmon for all rivers (unless a tag has been purchase in advance) and under reporting has contributed in justifying this recommendation. There are other drawbacks. Under reporting of sea trout led to Kilmarnock Hatchery being refused permission to collect sea trout brood stock for their hatchery in 2012/13. ART aren’t concerned with the rights and wrongs of inaccurate reporting; this is not our remit. It just would be nice to be able to accurately record every single fish captured so that we could see exactly how the River Irvine (and others) is really performing).

Reported catch and release of salmon in the Irvine catchment has much improved in recent years and is currently stable at 49% released for the second successive year (2012 &2013).   The total reported rod catch of salmon and grilse was 240 in 2013 which is just under the 20 year average return of 267.65 so the catchment appears to be holding its own (if under reporting remains constant).

Sea trout numbers as everyone knows, have gone through the doldrums since the 1980’s although across Ayrshire this year, anglers have been reporting better catches. As we are only reporting up to 2013 for the Irvine, it was encouraging to see an upturn in sea trout and finnock in the catchment last year with a combined total of 182 reported. This figure is considerably above the 20 year average of 133.05 and much improved over the all time reported low of 22 in 2011. It is the largest reported catch since 1996.

All the charts below relate to catches on the Irvine, Garnock and Annick Water combined. All data is Crown Copyright and kindly provided by Marine Scotland Science. 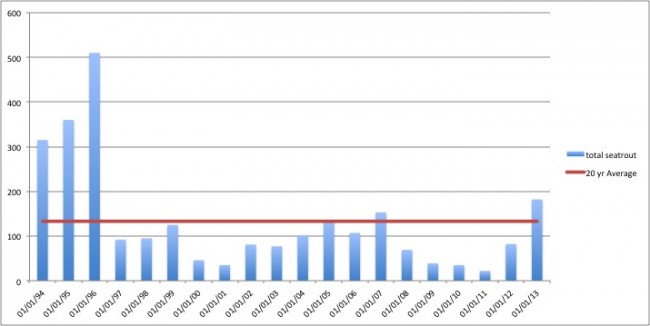 I’m about to compile results for all other Ayrshire Rivers in 2014 and will post details on the blog once I’ve notified the Boards of their results. I don’t expect good results from 2014 largely due to the dry summer but will just have to wait and see if there any surprises. I should complete the reports for the end of the month. Anyone who has yet to report their catches to the Clerks of the Boards, please do so immediately or I will be unable to include your returns.